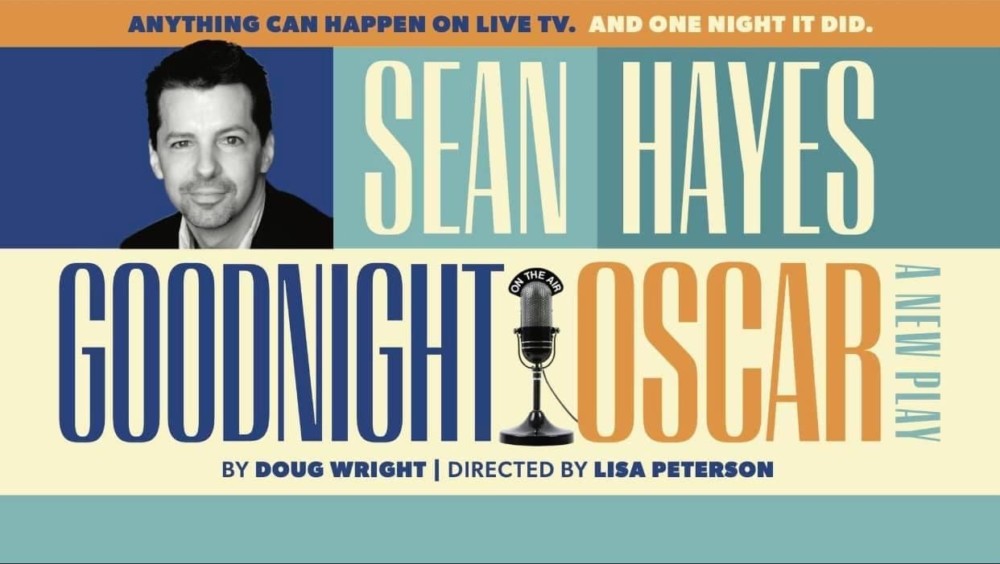 “It’d be nice to please everyone but I thought it would be more interesting to have a point of view.” The incomparable Oscar Levant is the subject of the latest premiere production at the Goodman Theatre. If you are not that familiar with Levant, don’t fret, by the end of the show, you will know him well. He was an actor, best known for playing the struggling concert pianist in the film An American in Paris. He was a fantastic musician, a skilled and popular interpreter of George Gershwin’s music. He was also a comedian, making him an in-demand regular on the talk show circuit. Best known for wicked double entendre, a self-deprecating one-liner or forked-tongue quip including “I knew Doris Day before she was a virgin.” He also, very openly, shared stories of his own personal demons, prescription drug abuse, neuroses, a Demerol addiction after a heart attack, and a precarious tap-dance between mental hospital stays, professional engagements and rest with his family at home. This is the crux at the heart of Oscar. More on that in a minute. 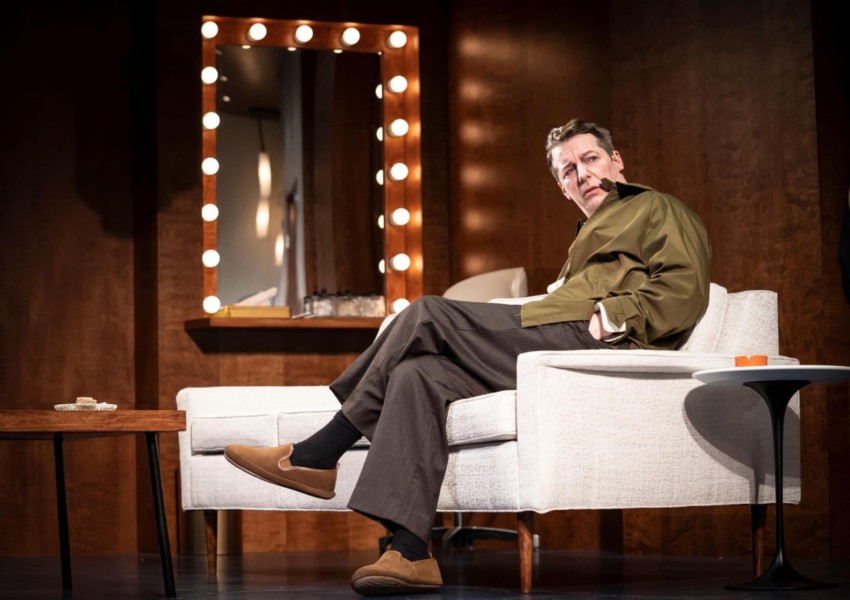 “What the world needs now is more geniuses with humility, there are so few of us left.” Returning to Chicago to play Levant, three-time Emmy Award winner, Sean Hayes. Best known as the wisecracking sidekick, Jack McFarland on the long running NBC hit sitcom, Will & Grace, Hayes is nothing short of spectacular in the role. A previous Tony nominee for his stage work in Promises, Promises opposite Kristin Chenoweth, if this extraordinarily polished production doesn’t have Broadway ambitions after its Chicago run, I will eat my hat. A quick scan of the Playbill proves almost everyone involved with this Goodman production has tight New York and Broadway ties. It is no surprise at all this play is now one of the hottest and in demand tickets in all of Chicago. 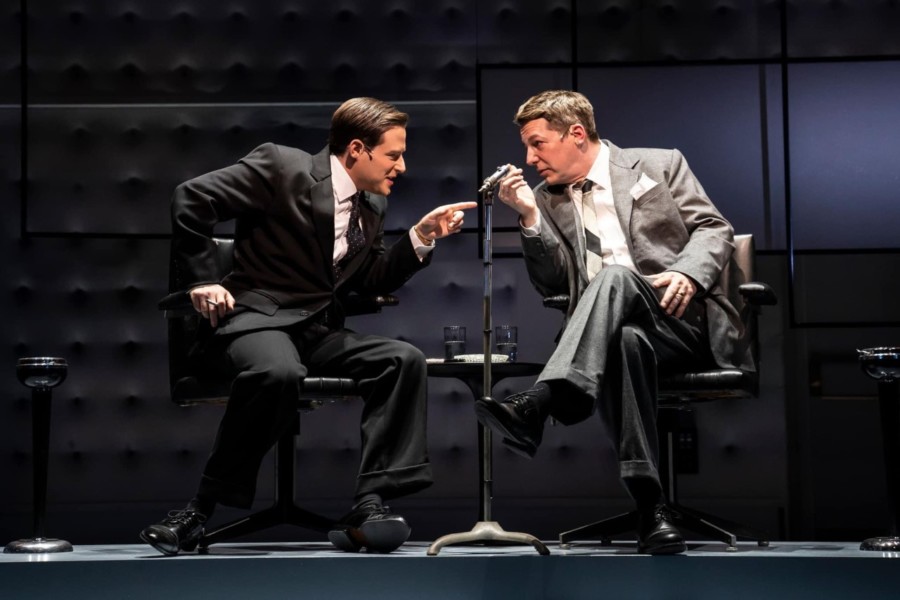 “First I brush my teeth and then I sharpen my tongue.” Decades before Carson, Letterman, Leno, Kimmell and Fallon, Jack Paar hosted the then hottest late-night talk show on television. One of his favorite guests, character actor, pianist and wild card observer, Oscar Levant. The night of one of his final appearances is the story staged here. Network executive Bob Sarnoff (Peter Grosz) and talk show host Jack Paar (Ben Rappaport) are at odds over this appearance. Paar loves Levant’s unfiltered and inspired candor. “Strip away the phony tinsel of Hollywood and you’ll find the real tinsel underneath” Levant once joked on his show. True comedy gold. Sarnoff, on the other hand, frantically worries about Levant’s appearance that could result in alienating viewers and offending delicate censors. What with three major networks at the time, could NBC stay competitive if viewers switched to ABC or CBS? 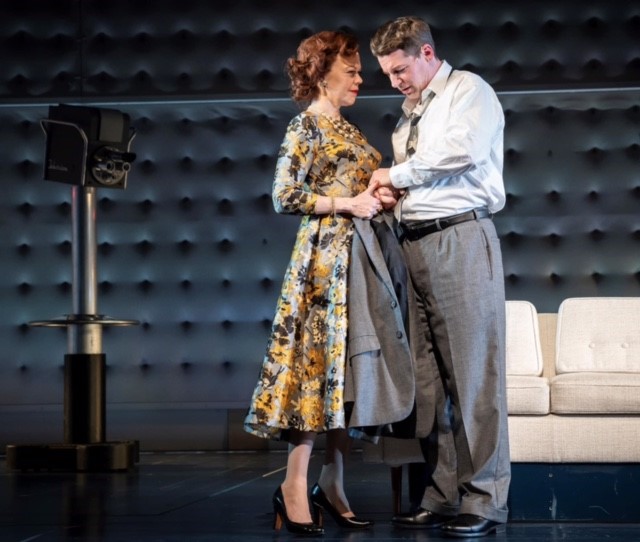 Enter, June Levant (a fabulous Emily Bergl) who needs to speak with Paar alone. A wife at the end of her rope because of her turbulent marriage to a mad genius, shares in order to allow him to appear on the show, she had to officially check her husband out of a mental hospital on a limited pass. 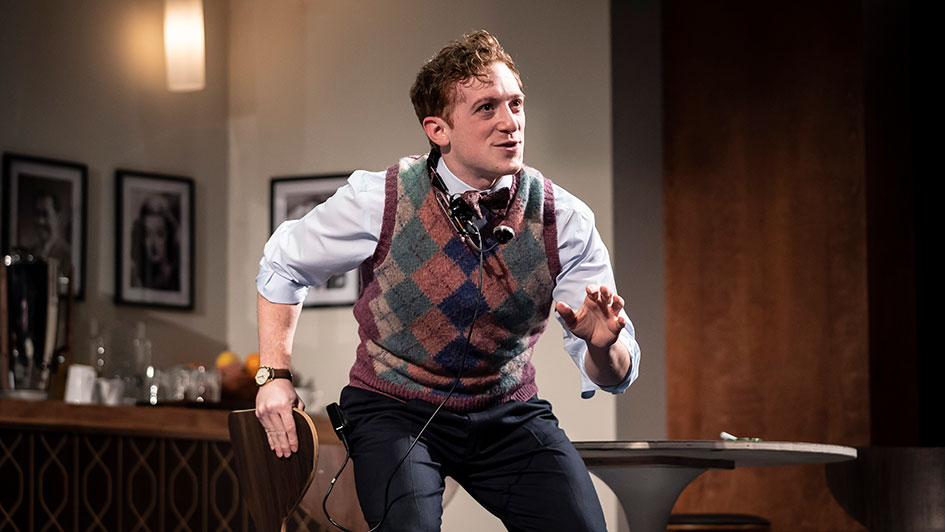 Joining him on this fraudulent furlough, Alvin Finney (Tramell Tillman) a Black medical professional, who in helping Levant, put his own career on the line. Also joining the fun, NBC assistant, Max Weinbaum (Drama Desk Award winner and Tony nominee, Ethan Slater of SpongeBob SquarePants fame) a scene stealing novice effortlessly manipulated by Levant’s whims. The final member of the cast, George Gershwin (John Zdrojeski) as a drug-induced, hallucinatory fantasy in the mind of Hayes’ Levant. 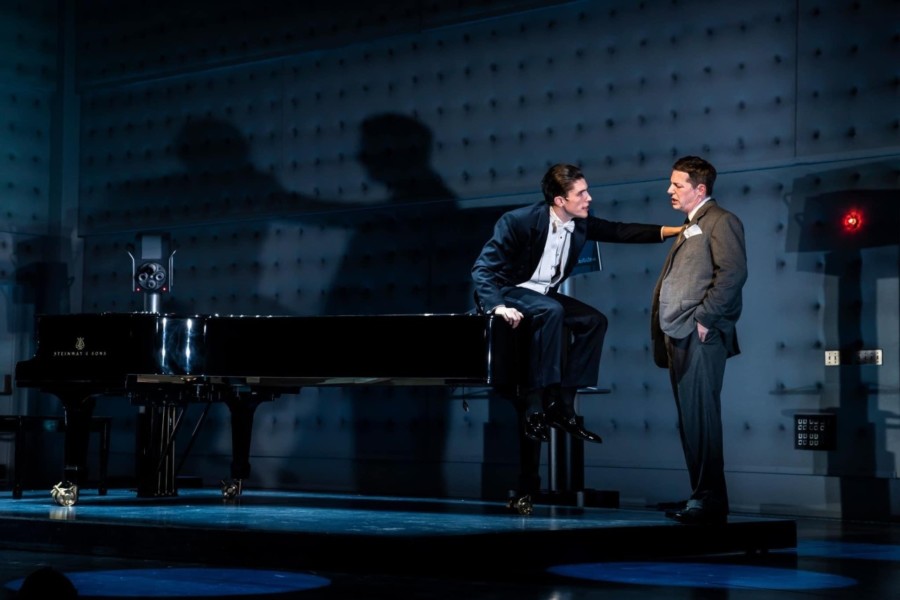 “I was once thrown out of a mental hospital for depressing the other patients.” Distraught, frantic, frenzied, impetuous and panic-stricken, Hayes mines comedic gold playing this neurotic but loveable character. Written by Doug Wright, also known as the book writer of War Paint, another Goodman debut, starring Patti Lupone and Christine Ebersol, the script is witty, wonderful and oh-so-much- fun. Directed by Lisa Peterson, this show is a marvel. Rachel Hauck’s set design will impress. Emilio Sosa’s 1958 influenced costume design is simply sumptuous. Ben Stanton and Carolina Ortiz Herrera’s lighting, particularly during the “fantasy sequences” between Levant and Gershwin will astound. The wig, hair and make-up designs of J. Jared Janas were also quite notable. 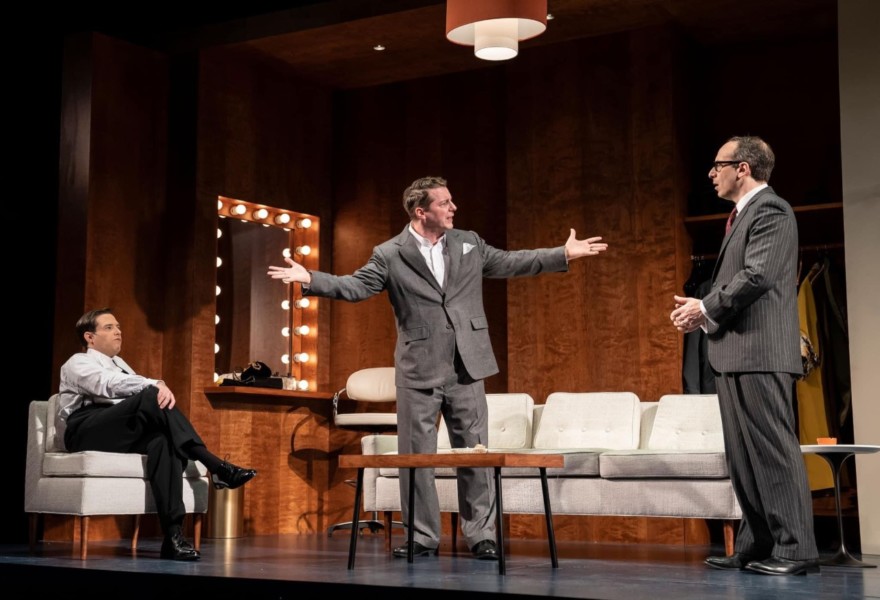 “Its not who you are, its what you don’t become that hurts the most.” At one point, Levant was the host of his own short-lived TV series, The Oscar Levant Show. His amazing skills on the piano enraptured, however his quick-wit often landed him in very hot water with the viewers and the top brass at the networks. When discussing a popular blonde bombshell of the time, “Now that Marilyn Monroe is kosher, Arthur Miller can eat her.” Wow! A multifaceted performer, this new play puts it all on display, warts and all. Hayes is absolutely astounding and his tour-de-force performance is all but guaranteed to win all the awards for which he will inevitably be nominated. Everyone involved here is firing on all cylinders. Bringing life to Levant’s artistic brilliance versus his very public personal demons, this show is a must see in a very crowded landscape of must see shows currently on the stages of Chicago. Steppenwolf’s King James, Broadway in Chicago’s Six and Moulin Rouge and Goodman’s Good Night, Oscar proves theater is back in a big way, not to be missed. 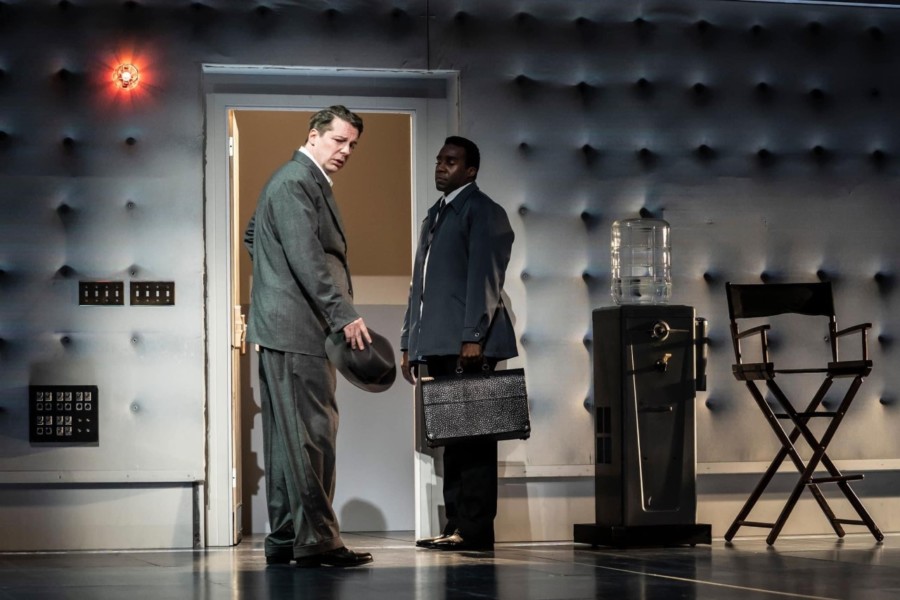 Good Night, Oscar is now playing at The Goodman Theatre through April 24, 2022