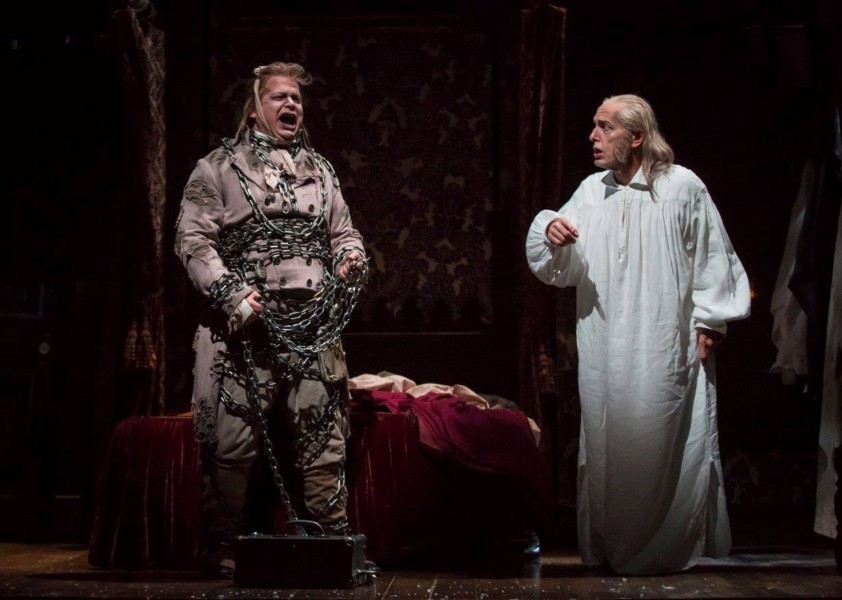 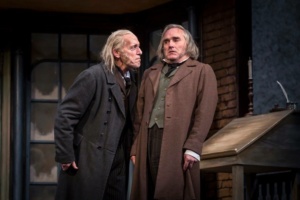 It is certain to say, the Goodman Theatre is celebrating their 40th Anniversary of A Christmas Carol in high style. The return of this timeless and heart warming classic, wraps up another successful year of productions, with a reminder about the responsibilities of those who have to help those who have not. Assembled for the opening night curtain call, over 40 returning artists who’ve directed or appeared in this holiday production over the last 4 decades, including E. Faye Butler, William J. Norris, Felicia P. Fields and Nancy Voights to name a few. Along with these returning familiar faces, congratulatory notices sent from Chicago Mayor Rahm Emanuel and Illinois Governor Bruce Rauner punctuated the evening. Not too shabby company, Goodman Theatre, not too shabby at all. Returning for this year’s production, Larry Yando’s marking his 10th annual appearance as the curmudgeon Scrooge, while also marking the 5th year Artistic Associate Henry Wishcamper has sat in the director’s chair of this Charles Dickens’ Christmas classic. It was also reported over 1.5 million audience members include this seminal favorite among their holiday traditions over the years. Being thoroughly  entertained by the work of over 10 Directors, 29 Tiny Tims, 8 Scrooges, 34,560 costume pieces and most essential, hearing over 23,000 “Bah, Humbugs” delivered with villainous precision. 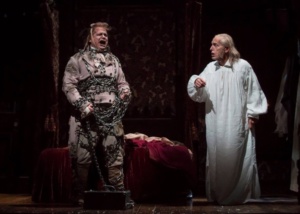 Tom Creamer’s script, adopted from the Charles Dickens’ tale, still holds up quite nicely. The diverse 26 member acting ensemble was cast as colorblind as another live action hit, Hamilton, currently playing to sold out audiences right down the street. New to this year’s cast, Goodman’s first ever female Tiny Tim, precocious 4th grader and neuroblastoma cancer survivor Paris Strickland. Also joining the team, a gender swapped Ghost of Christmas Past. After several years of hunky, shirtless male cherubs clad in loincloths and heavy, Gothic wings, this year Molly Brennan’s adorned like an imaginative Super Plum Fairy, with hot pink costume accents and prop lights strategically placed near the palms of her hands. This Ghost of Christmas past, high flying ever so gracefully above the stage, sported a set of miniature pink pixie wings on her back. Joining Brennan for a night of Christmas Scrooge dream haunting, Lisa Gaye Dixon, The Ghost of Christmas Present, is all glitter spreading, ruby velvet ensconced bravado, matching Scrooge toe to toe, line to line. It is refreshing to see women driving the story here, not just playing second fiddle to their male counterparts. The dark, menacing edges have been shaved off the Ghost of Christmas Future, normally portrayed by a 2 story imposingly dark marionette, however this year, played by Breon Arzell perched on a set of Actor Gymnasium stilts. Perhaps this was to make this portion of the story a little more family friendly. I do vividly recall 2 years ago, a father taking his young daughter to the lobby during this portion of the play, as she was legitimately frightened and starting to cry. Inducing trauma is a holiday tradition for which no one wants to play a part. 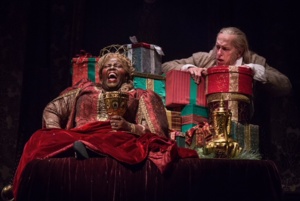 For those who have never experienced Goodman’s A Christmas Carol, what are you waiting for? The theme of atoning for one’s sins is particularly pointed this year, considering the nation’s current political climate. Todd Rosenthal’s imposing 2 story set, Heidi Sure McMath’s lavish period costuming, and Keith Parkham’s dramatic lighting effects continue to sparkle, year after year. Ron E. Rains lovable Bob Cratchit, Ariana Burks always stellar vocals on display as Martha Cratchit/Catherine, Kareem Bandealy crisp diction as the Narrator and Tommy Rapley’s choreography will warm the heart of any seasonal Grinch, make that Scrooge, in attendance. The additional live musicians on stage; Greg Hirte, always impressive on the fiddle, Andrew Coil on the Violin, Justin Amolsch on the french horn and Malcolm Ruhl’s accordion/concertina/guitar remain a delight. As for the additional villain, Joe Foust is back for his sixth, chain-rattling run as the nightmarish and scene-staling, Jacob Marley. 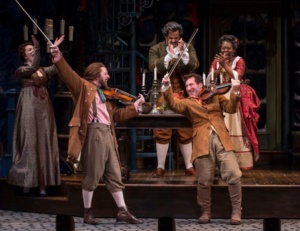 Adding one more statistic to the already crowded tally of this 40th anniversary production of Goodman’s A Christmas Carol, this is personally, my sixth time in attendance. While there has been expected rotating changes in the cast, with subtle changes in costuming too, the heart on stage and off has always remains firmly intact. The holiday showcase field in Chicagoland is always expected to be a very crowded field. With their signature lush staging, character over caricature focus, with texture and sentimentality winning out over flash and razzmatazz, the Goodman’s A Christmas Carol is a time honored tradition that should be celebrated this and every year. 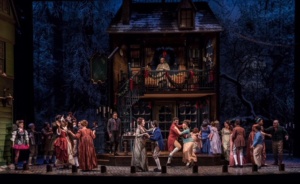 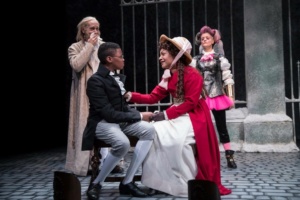 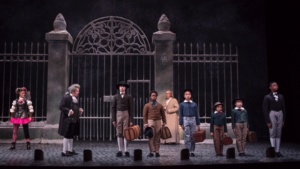 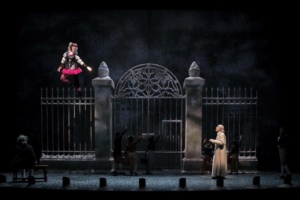 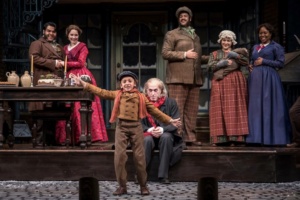