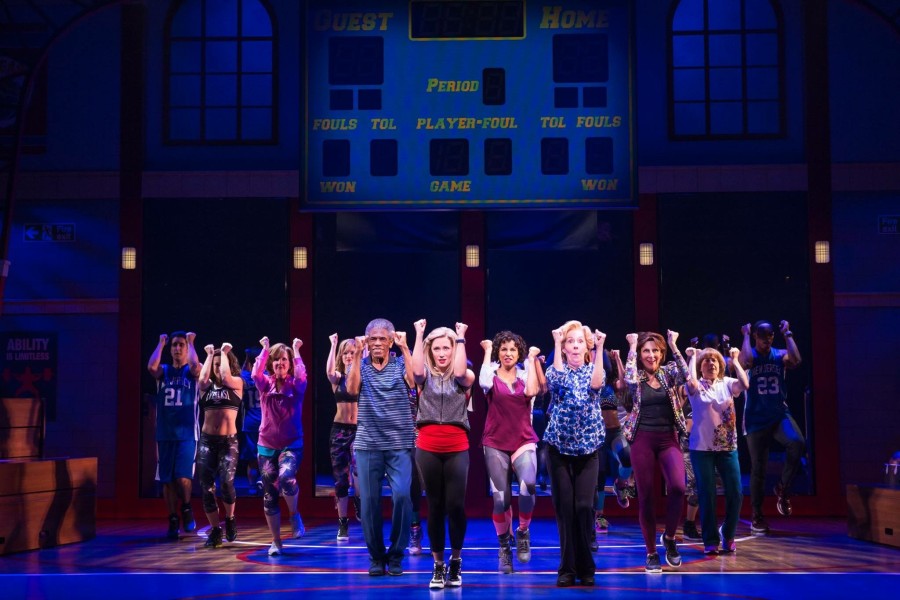 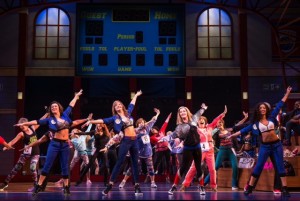 2,4,6,8, who do we appreciate? The new Broadway-bound musical comedy, Gotta Dance, hopes to answer that question with a rousing chorus of boogying senior citizens! Currently playing in Chicago at the Bank of America Theatre, this ambitious new show blends the novelty of A Chorus Line, the charm of the cult hit, 90’s cheerleading film Bring It On and the comradery of the classic 80’s sitcom, The Golden Girls. Featuring a large cast of commonplace seniors who audition to dance hip hop style at the half time show, in center court,  in front of 20,000 enthusiastic sports fans. No small feat. These peppy old-timers are not dwindling quietly into passive retirement. They share the fact they all love to dance, they all have something to prove to themselves and each other, and while they are all over 60, they firmly believe age is not just a number. Directed and choreographed by Jerry Mitchell (Kinky Boots) with co-choreography by Nick Kenkel, the book by Chad Beguelin and Bob Martin and 14 original songs by Nell Benjamin and Marvin Hamlisch, the behind the scene squad is just as formidable as the company on stage. While not perfect, Gotta Dance is an affable underdog story that will leave a smile on your face if not an indelible mark on your heart. 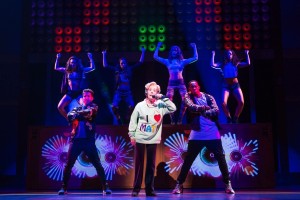 The strongest feature of Dance is the remarkable, large cast. This talented troupe of television and stage veterans shine even when the material is not quite up to their level. I found it curious. They are jokingly referred to with the novelty title “Nifty Shades of Grey,” although there is barely a grey hair to be seen on anyone on the stage, due in no small part to a series of fantastic wigs and hair pieces designed by Josh Marquette. The “New Jersey Cougars”feature good girl school teacher Dorothy/Dottie (“Mary Tyler Moore Show” vet Georgia Engel) who grades papers by day and who has a not so secret penchant for gangster rap music at night. She is smitten by Ron (Andre De Shields) self proclaimed “The Prince of Swing,” a grandfather with much to prove to his dismissive daughter-in-law. Bea (Lillias White) is the sassy and overbearing grandmother of Kendra (Joanna A. Jones) a current cheer squad member secretly dating a basketball player who is not entirely divorced yet. Her three chorus solo “Princess”detailed how spoiling a grandchild doesn’t necessarily make for a well adjusted adult. Putting the sex-appeal in sexagenarian, the nimble, Joanne (“Hart to Hart” and “Hollywood Wives” star Stefanie Powers) a former beauty queen and former trophy first wife, joined the squad to make her ex-husband jealous for dumping her for a twenty-something. She purrs pearls of wisdom to the ladies like “eventually all marriages are about revenge.” Camilla (Nancy Ticotin) is a Latin sensation with legs for days and a boyfriend half her age, who is not a fan of being “age appropriate.” Her samba/salsa infused “Como No” dance solo is a come hither, leg kicking, hip shaking, lusty, act two stand out. 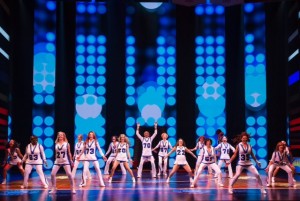 The remaining team members are predominately comedic relief. Fran (Lenora Nemetz), a Mary Kay sales woman hoping to expand her target market and Muriel (Kay Walbye) whose thick glasses, homely hair cut and lack of timing desperately needs to “enhance the gifts God gave you.” These two are the “Lucy and Ethel” of the crowd. Mae (Lori Tan Chinn of “Orange is the New Black”) may lack strong dance skills, but her act two solo “The Waters Rise” is a tribute to a lifetime of love with a partner who is facing Alzheimer’s disease. A queen of physical comedy, her oversized smile enchanted. The squad of snappy seniors and elegant elders are lead by their 27 year old coach, Tara (Haven Burton) who is also facing a crossroad of her own. At 27, she has aged out of her cheer squad eligibility and has been reduced to either coaching or unemployment. After a few too many “bingo night at the Elk’s Club” cracks and silly squad member infighting, Tara realizes “you are my squad, and I swear to God, they will all want to see that.” You may not be able to go back, but you can certainly go on, with renewed self-esteem and self worth. Regardless of age, everyone can relate to the universal theme of “it’s never too late to reach for your dreams.” 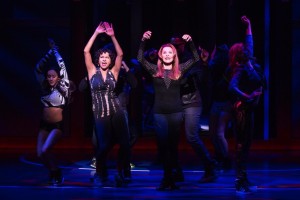 Jerry Mitchell scored big with his pre-Broadway Chicago of a little show called Kinky Boots. He has reunited with many members of that creative team for Gotta Dance as well. Five time Tony Award nominee, David Rockwell provided scenic design, costumes are from Tony Award-winner Gregg Barnes, Jason Lee Courson’s background projection design impressed and Tony Award-winner Kenneth Posner delivers commanding lighting design. While it is premature to conjecture whether Gotta Dance will bring more gold to anyone’s mantel, this feel good show will certainly leave the spectators tickled.   It is often joked that a matinee show’s audience is a combination of blue hairs and tourists. Here the septuagenarians are the heroes, central characters and champions. For that, Gotta Dance rocks.

Gotta Dance is now playing at the Bank of America Theatre through January 17, 2016