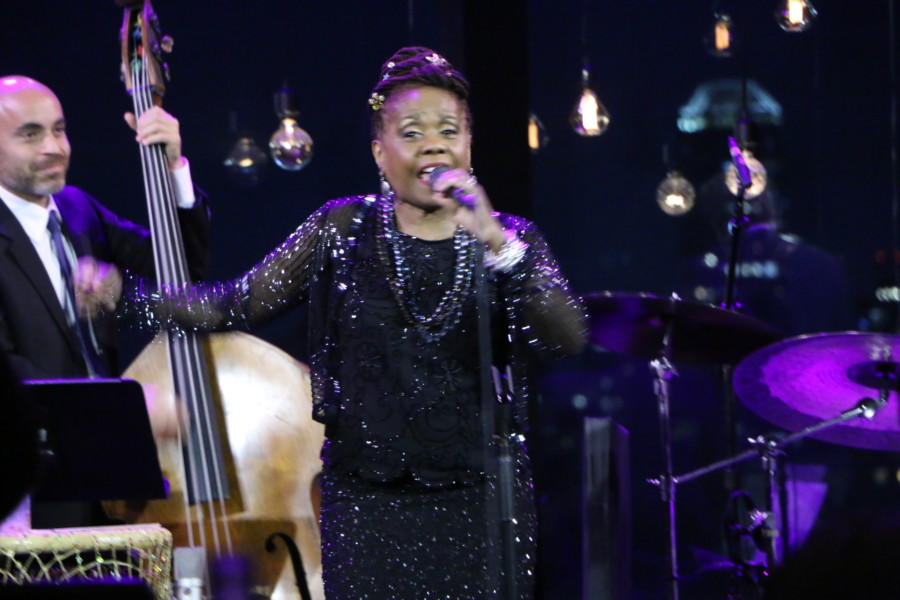 Live From Dizzy’s launched their reopening on Thursday, October 1, with Grammy Award winner Catherine Russell and her trio. Russell is one of the most widely recognized jazz vocalists since the release of her debut album in 2006. Russell’s experience extends far beyond releasing her acclaimed albums as a solo artist; she has also worked with Steely Dan, David Bowie, Cyndi Lauper, Paul Simon, Jackson Browne, and Levon Helm.

Russell’s dad, Luis Russell, was a musician and songwriter who played with Louis Armstrong for years and her mom, Carline Ray, sang and played.

Her set ranged in jazz, R&B, the blues and standards. Her first-rate players include Matt Munisteri on guitar, Tal Ronen on bass Mark McLean on drums and Mark Shane on piano dazzled with their talent and teamwork.

On “I Want To Be Happy” Russell shows she definitely has a style. She makes songs her own and an old familiar song, suddenly sounds brand new. Russell’s “Out of The Crowd” is smokey and seductive. Then there’s the scatting “I’ll Be Satisfied”. A swinging “I’ll Be Glad When You’re Dead” was filled with a lush blues vocal. On East of the Sun (And West of the Moon)” a smooth, easy style shows her phrasing. ”Wrap Your Troubles in Dreams (and Dream Your Troubles Away)” and “You Stepped Out of a Dream” and all the songs in-between that I did not know the names of made the night searing in musical bliss.

Russell and Dizzy’s show why having live music in an enchanting setting makes us so glad NY is alive again!