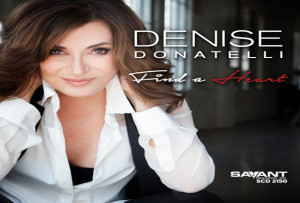 DJANGO at The Roxy Hotel, 2 Ave. of the Americas 8:00 PM, www.roxyhotelnyc.com 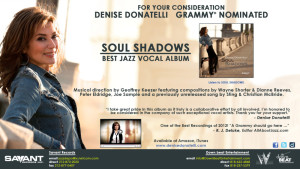 Denise Donatelli, one of today’s premiere vocalists, alternating between jazz and adult contemporary with ease, has been on quite a roll! Her last three consecutive albums have received four Grammy nominations.  She has been voted into the Downbeat Critics Poll as Female Vocalist Rising Star for the past three consecutive years, and was named Female Jazz Vocalist of the Year by the Los Angeles Jazz Society. With the release of Find A Heart, Donatelli once again proves why she is the subject of such accolades.

For Find A Heart, Denise’s song selections are daring and impeccable by expanding the idea of the Great American Songbook beyond its heyday.  In addition to Sting, the album features music written and recorded by such contemporary composers including David Crosby, Donald Fagan, Beck, Billy Childs (with lyrics written by Denise), Brenda Russell, the Yellowjackets and the rock band, Journey. “I think we made some great selections, she states, I wanted to find songs that hadn’t been covered much before and selected some great music to introduce to jazz fans.”

Suzanna BowlingNovember 22, 2021
Read More
Scroll for more
Tap
My View: This Is As Close As It Gets – Manhattan Transfers To Boca Raton
Opening Night of Rock and Roll Refugee with Exclusive performance by Genya Ravan