“Grand Horizons” – A Look at the Difficulty in Communication 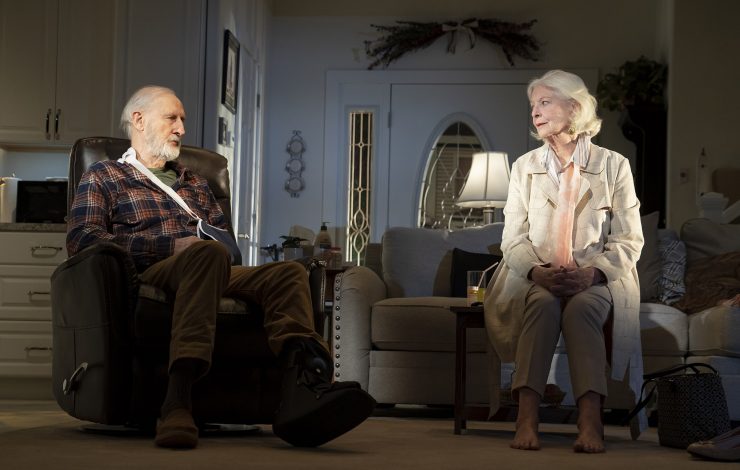 “Grand Horizons” – A Look at the Difficulty in Communication

Bess Wohl’s “Grand Horizons” has a great deal to say if you are willing to listen. Her comedic take on “I’m getting mad as hell and I’m not taking it anymore” is seen through the eyes of a seemingly happily married couple. Yet, after 50 years of marriage, the wife (the fabulous Jane Alexander) wants a divorce and the husband (James Cromwell) blithely says “ok”.

As the veils are dropped, these two sons have to face the facts so many of us try to avoid: parents are real people who are flawed. It becomes undeniably apparent in this scenario considering their father is tastelessly sexting his tacky girlfriend (the delightful Priscilla Lopez).

Their is pause for comedic relief from learning about buying vibrators on the internet, Nancy pretending to have Alzheimer’s and Bill’s sex joke about nuns. It also becomes apparent that the kids have their own issues to deal with. Brian, a high school drama teacher, can’t bear to reject the students who audition for him. His current production of Arthur Miller’s “The Crucible” has a cast of 200. When Brian tries to connect with a late-night booty call (Maulik Pancholy), the laughs open the doors to how trapped and broken this family has become.

Grand Horizons is the name for the retirement/senior housing development in which Bill and Nancy reside. Here, every unit looks the same, so why would anyone want to spend their time here? This is where you come to die. So, how could you not go a little crazy? The surprising shock at the end of act one lets it shine brilliantly.

Leigh Silverman’s (The Lifespan of a Fact) direction is fast, funny and touching. She gets the most out of her brilliant cast with honor for all of us who were eagerly awaiting and particularly grateful to see Ms. Alexander back on stage. Each character in this show is fleshed out and may seem stereotypical, but Cromwell gives us a deeper look into how men hide their feelings. McKenzie shows us how each one of us is scared and hiding his or her own rage and fear. Urie breaks our hearts with his inability to grow past his traumas and hurt and Ms. Park’s shows us that standing up for ourselves does not have to be one sided.

“Grand Horizons” began at the Williamstown Theatre Festival. Playwright Bess Wohl (American Hero, Small Mouth Sounds and Make Believe), gets off to a grand start in her Broadway debut with “Grand Horizons” and made me laugh out loud, which plays rarely do. This play is deeper than it seems, yet, it gives us a way to laugh at the tragedy of it all. And, what better way to cope with tragedy than comedy?