With nearly 3,500 ballots now counted for the ‘Great Society Primary’ at the Vivian Beaumont Theater on Broadway, theatergoers of The Great Society have broadened the lead for Senator Elizabeth Warren as the Democratic presidential candidate with 37% of the vote (+1% from Week 1), followed by Vice President Joe Biden (17%, NC), Mayor Pete Buttigieg (16%, +1%), Senator Kamala Harris (6%, NC) and Senator Bernie Sanders (5%, -1%). The rankings remain unchanged in the Republican primary field, theatergoers with theatergoers choosing President Donald Trump (4%) over Governor Bill Weld (2%) and Congressman Joe Walsh (0.5%).

The ‘Great Society Primary’ launched on August 27, 2019, on what would have been President Lyndon B. Johnson’s 111th Birthday. All attendees of The Great Society have the opportunity to ‘vote’ for the candidate they would like to see win either the Democratic or Republican 2020 presidential primary in one of four voting booths in the theater lobby. ‘Votes’ can also cast online GreatSocietyBroadway.com; results will be shared following each performance at Twitter.com/GreatSocietyBwy.

In addition, The Great Society will host a series of voter registration events in partnership with FairVote, NYC Votes and Young Invincibles in an effort to support voter registration and turnout on Broadway. For the list of upcoming events, click here. Each event will take place in the lobby of the Vivian Beaumont Theater (150 W 65thStreet).

On August 6, 1965, President Johnson signed into law the Voting Rights Act of 1965, landmark federal legislation that prohibits racial discrimination in voting, which took effect during the height of the civil rights movement in the United States. Designed to enforce the voting rights guaranteed by the Fourteenth and Fifteenth Amendments to the United States Constitution, the Act secured the right to vote for racial minorities throughout the country, especially in the South. The Act is considered to be the most effective piece of federal civil rights legislation ever enacted in the country.

The Great Society is currently in preview performances and will officially open on Tuesday, October 1, 2019 at the Vivian Beaumont Theater (150 West 65th St).This is a 12-week limited engagement.

Tickets to The Great Society are available online at GreatSocietyBroadway.com 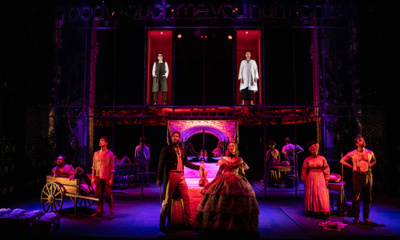