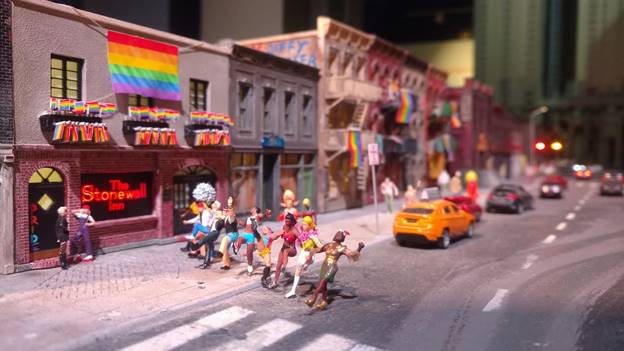 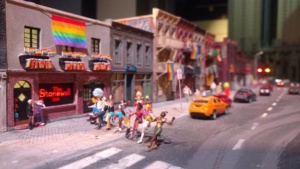 Pride month is in full swing in New York City and rainbow flags are flying high across every street and down every avenue. Just in time for the 2018 Pride March this weekend and as a salute to the Stonewall National Monument, Gulliver’s Gate, the miniature world in Times Square, now has a permanent “mini” Stonewall Inn located in their New York City model. The iconic scene illustrates in full detail an eccentric crowd of LGBTQ people outside of the national monument.

Gulliver’s Gate is the newest attraction in Times Square and an engaging and interactive miniature exhibit of the entire world.  As you walk off 44th street you will find yourself in a completely transformed space, housing thousands of miniature buildings, people, airplanes, cars, trains, buses and so much more. The 50,000 square foot space consists of miniature regions of the world, that were built by model makers in their specific regions (i.e. Israel was built in Tel Aviv, Russia was built in Saint Petersburg, New York was built in Brooklyn, and so on). The display houses more than 1,000 miniature trains, 12,000 wagons, 10,000 cars and trucks, and over 100,000 people – all in miniature form, with regions including New York, the Middle East, Europe, Britain, Niagara, Russia, South America and Asia.  All visitors are given a key as they enter, and as they go through the attraction, the key can be used to turn on and off interactive aspects of Gulliver’s Gate.  Once you’ve gone through the space, Gulliver’s Gate then offers all guests the opportunity to create miniature versions of themselves through a full-body scanner and 3D printer, to become a “model citizen” in the display as well as keep as a souvenir.

Suzanna BowlingMay 16, 2022
Read More
Scroll for more
Tap
And You Are There Broadway By The Year: 1988 and 2017
Inside the Off Broadway Alliance Awards