Hadestown Is Coming To Broadway This Spring

Hadestown Is Coming To Broadway This Spring 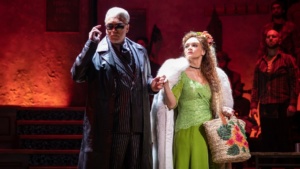 Preview performances for Hadestown will begin Friday, March 22 ahead of a Wednesday, April 17 official opening night. Casting and ticketing information for the Broadway production will be announced shortly, but the London cast included Amber Gray, Patrick Page who were also in New York Theatre Workshop’s production and Eva Noblezada, Reeve Carney and André de Sheilds. 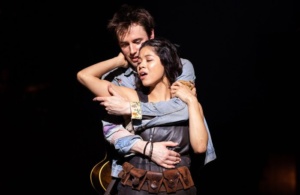 “The genius of Anaïs Mitchell’s work in Hadestown is that she takes a myth as old as time and gives it a new life so vibrant and relevant that audiences hold their breath, waiting to see how this timeless tale will unfold,” producer Mara Isaacs said. “Rachel Chavkin and the entire creative team have created a pulse-racing world for Anaïs’ joyous and haunting score to live. As we prepare for Broadway, I’m thrilled for New York audiences to see this entirely new production, a raucous and electrifying celebration that is truly a show for our times.”

Hadestown originated in 2006 as Mitchell’s community theater project that traveled Vermont before gaining a cult following when she turned the songs into an acclaimed album which was called “far and away one of the best records of 2010” (Sunday Times of London). In 2013, Mitchell saw Chavkin’s celebrated Off-Broadway production of Natasha, Pierre, and The Great Comet of 1812, and knew she had found her artistic partner. Together, the two women have transformed Hadestown into a genre-defying new musical that blends modern American folk music with New Orleans-inspired jazz to reimagine a sweeping ancient tale.

Hadestown electrified audiences with its 2016 world premiere at New York Theatre Workshop before receiving its Canadian premiere at Edmonton’s Citadel Theatre in 2017. The National Theatre provided further development to Hadestown in London and the show is currently playing at the National’s Olivier Theatre through Saturday, January 26, 2019, before it’s eagerly anticipated Broadway debut.

Hadestown follows two intertwining love stories — that of young dreamers Orpheus and Eurydice, and that of King Hades and his wife Persephone — as it invites audiences on an epic journey to the underworld and back. Mitchell’s beguiling melodies and Chavkin’s poetic imagination pit nature against industry, faith against doubt, and love against fear. Performed by a vibrant ensemble of actors, dancers and singers, Hadestown delivers a deeply resonant and defiantly hopeful theatrical experience.

Hadestown was developed with funding from the Eli and Edythe Broad Stage at the Santa Monica College Performing Arts Center and was further developed by The Ground Floor at Berkeley Repertory Theatre. Hadestown was co-conceived by Ben t. Matchstick.

Suzanna BowlingApril 10, 2021
Read More
Scroll for more
Tap
You Are There on The Step and Repeat at Paper Mill Playhouse Production of Irving Berlin’s Holiday Inn
Passion Nation Left Me Starving For More