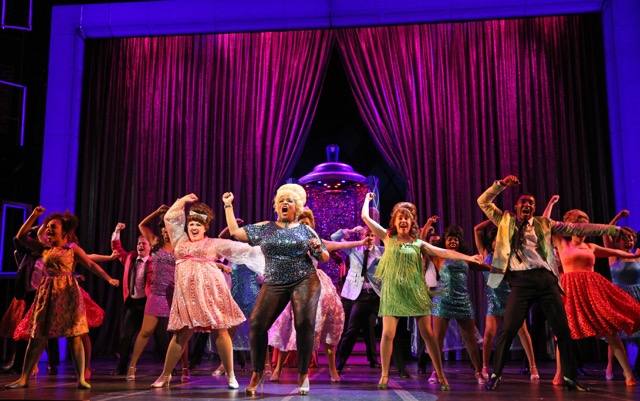 Hairspray – The Beat Goes On

Hairspray – The Beat Goes On 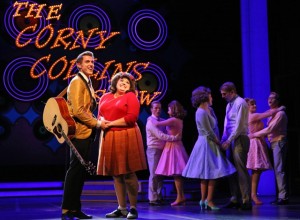 It is currently a carnival of “Girl Power” at the Paramount Theatre in Aurora. Just opened, Hairspray the musical, the bright, techno-colored, 2 plus hour celebration, honoring zaftig heroine, Tracy Turnblad, a Baltimore teen who has a heart as big as her hair. The powerful and influential feminine touches do not just end on the stage. Amber Mak, making her auspicious Paramount directorial debut (she is also the show’s principal choreographer) has surrounded herself with a team of talented women. Case in point, Linda Buchanan responsible for the imaginative scenic design, Theresa Ham and her flamboyant costume design, utilizing every cheerful color in her Crayola box & most importantly, Katie Cordts whose gravity defying wigs are the namesake of the show. With a book by Thomas Meehan and Mark O’Donnell and songs written by Tony-winners, Marc Shaiman and Scott Wittman, you will be tapping your toe from the opening notes of “Good Morning Baltimore” to the frenetic, flourishing finale “You Can’t Stop The Beat.” 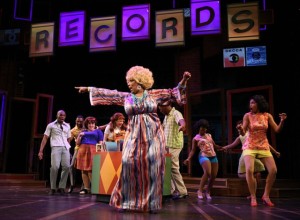 Before focusing exclusively on Mak’s Paramount vision, it is important to do a little history lesson of the source material. Hairspray started as John Waters’ 1988 cult classic movie, starring a then unknown, Ricki Lake as Tracy, drag performer, Divine, as her mother Edna and Blondie Front woman Debbie Harry as the villainous, Velma Von Tussle. Reimagined and rebranded on Broadway in 2002,  the 8 time Tony Award-winning show ran for over 2,500 performances and made a star out of newcomer, Tony-winner, Marissa Jaret Winokur, Tony-winner Harvey Fierstein as Edna, and a pre-Glee, Matthew Morrison as heartthrob, Link Larkin. Next up, the 2007 film, featuring neophyte Nikki Blonsky as Tracy, joining with seasoned musical pros including John Travolta from Grease as Edna, High School Musical’s Zac Efron as Link, Grammy-winner Queen Latifah as Motormouth Mabelle, and multiple Oscar nominee Michelle Pfeiffer as the dastardly villainous, Velma. Each adaptation set in the 1960’s, retaining the uplifting message of self-acceptance painted against a back drop of civil unrest, protest and the importance of integration. Then there is the hair. The big, big, big hair.

This takes us to Aurora and the Paramount’s ambitious staging of this infectiously charming, high-energy party, with it’s spirited and enthusiastic, non-stop dance numbers and sumptuous costuming. We begin our journey with our heroine, Tracy Turnblad (Amelia Jo Parish) a plucky and pleasantly plump teen, who dreams of one day dancing on the Corny Collins Show. As she began to sing, Parish was propped on a 12 foot tall, pyramid shaped sign that read HAIRSPRAY!  As she descended to the stage, we were transported back to 1960’s Baltimore, when television had three basic channels and every teen spent their allowance on 45 records or a burger at the Malt Shoppe. When a slot to be one of Corny Collins (scene stealing Devin DeSantis, in a terrific comedic performance) dancers opened, Tracy and her best friend run down to try out. Here, they meet the show’s two villains, mother and daughter Von Tussle’s, Velma (Heather Townsend) and Amber (Samantha Pauly.)  Both thin, blonde, & outwardly beautiful, they don’t allow Tracy the chance to shine and quickly discharge her. Sent to detention for skipping school to audition, Tracy’s luck began to change when she met Seaweed J. Stubbs (Gilbert Domally) and his sister, Little Inez (the always delightful, Ariana Burks.) Tracy discovers dance moves from these African-American hot-footed hoofers she had never before witnessed. Breaking those moves out at a school dance Corny happened to host was enough to make him cast the plus-sized princess on his show.  The remainder of this spectacle focuses on Tracy’s rise to stardom, her romance with crooner Link Larkin (the engaging Henry McGinniss) and her inability to accept the status quo of segregation on Corny’s show and in her hometown of Baltimore. 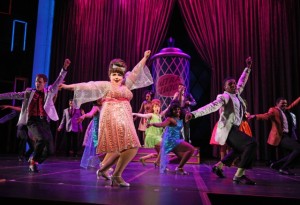 This cast has three performers who so impressed, they deserve additional recognition. As Penny Pingleton, Landree Fleming, in her Paramount debut, proves herself a most adept physical comedian. Playing Tracy’s awkward best friend, Penny, Fleming established herself the grand physical comedian of the troupe. This young Carol Burnett-in-training, her scenes involving her cross-racial romance with Seaweed generated the most audience response, laughter and applause on the night I attended. Big things are in store for this petite powerhouse. Also in her Paramount debut, Samantha Pauly enthralled as Amber Von Tussle, bringing more to her one note, self-absorbed character than was required.  Then there is that voice.  This girl can really sing.  The act one  “Mama, I’m a Big Girl Now” was a showstopper.  When these two ladies, joined with Parish as Turnblad, sing their independence to their domineering mothers, well, when I wasn’t laughing, I was astonished by the lushness and power of their vocals. Lastly, there is E. Faye Butler, as the brazen Motormouth Maybelle, the ostentatious hostess of “Negro Day” on the Corny Collins Show.  Speaking exclusively in rhyme,  “we can’t get lazy when things get crazy!” she brought the show down with her two inspired solos, “Big Blonde and Beautiful” a celebration of accepting the plus sized women “who wants a twig when you can have the whole tree” and the powerful ballad “I Know Where I’ve Been.” Joined by the entire cast, Butler took us to church, so to speak, with her commanding ballad about the struggles to racial equality.  Just as poignant in theme in 2016 as it was in the 1960’s where this piece is set.

Likewise impressive, Mak’s choreography.  From the clever “Ken Doll” treatment of McGinnis’s Link in the romantic fantasy “I Can Hear The Bells” to the glitter dipped grandeur of “Welcome to the 60’s” Amber kept one foot firmly planted on the ground, so as to not let the production get too campy or superfluous.  I only wish a little more spirit could have been given to Michael Kingston’s turn as Edna Turnbland.  He didn’t seem to relish playing the role of the mother. I also would have liked more despicability from Townsend’s villainous Velma Von Tussle.  The character is written as a mean spirited, narcissistic, racist, but this Cruella De Vil type is played far too small here to be poisonous and potent.  She was quickly steamrolled over by Tracy, Penny, and the remainder of the cast.  Her “(The Legend of) Miss Baltimore Crabs” should make audiences sneer as this “past her prime” former beauty queen purposely inspires disdain with lyrics including “those poor runner-ups, might still hold some grudges. They padded their cups, but I screwed the judges.”   It is justifiable to have an unlikeable nemesis, but that never really materialized.

Time travel to Paramount for a fun-filled, foot-stomping romp of a good time. Not perfect, but highly enjoyable nonetheless, I look forward to Mak’s next production. For now, “Welcome to the 60’s” where the big girl gets the guy and racial equality flies! Proving once again, Hairspray holds up no matter what you throw at it.

Suzanna BowlingOctober 22, 2021
Read More
Scroll for more
Tap
From Sex, to Dog to Rocky Horror Annaleigh Ashford is on a Roll
Opening Night of Rock and Roll Refugee with Exclusive performance by Genya Ravan