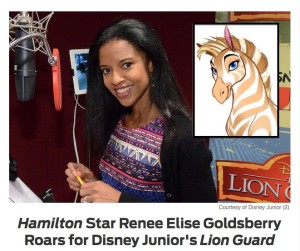 Wednesday was the final #Ham4Ham. Rory O’Malley brought Renée Elise Goldsberry out with Alex Lacamoire and the band to perform “Congratulations,” a song from #HamiltonPUBLIC that was cut before Broadway! Goldsberry will lend her voice in season two of Disney Junior’s The Lion Guard, an animated series which continues the story of The Lion King. She will voice Dhahabu the Golden Zebra, the charismatic leader of a group of zebras. Goldsberry made her Broadway debut playing Nala in The Lion King in 2002. Renee is best known by TV fans for playing The Good Wife‘s Geneva Pine, Goldsberry was recently cast in a new Netflix sic-fi drama Altered Carbon, which is set in a futuristic world where the human mind can be digitally transferred from one body to another. Joel Kinsman stars. Goldsberry will play the role of Quellcrist Falconer, a revolutionary and leader of the rebellion against the Protectorate. She is a master strategist, as well as the love of Kovacs’ life. 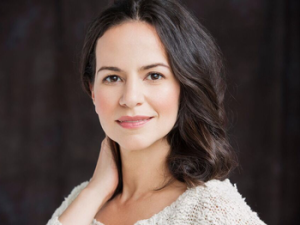 Mandy Gonzalez will return to Broadway this October as Angelica Schuyler. Gonzalez created the role of Nina Rosario in Miranda’s In the Heights; she can currently be seen on screen in Madam Secretary and Quantico.

Suzanna BowlingDecember 30, 2021
Read More
Scroll for more
Tap
Days of Our Lives Peter Reckell Meets The Press as He Stars In The Fantasticks
Showtime at Haven Where Pre Theatre Becomes an Experience