Ham4Ham Celebrates Muhammed Ali As Does The World

Ham4Ham Celebrates Muhammed Ali As Does The World 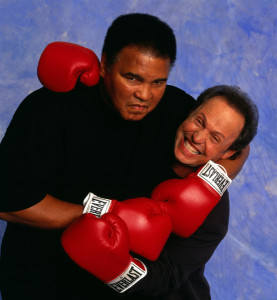 Three days of funeral proceedings began yesterday with a downtown festival  called “I Am Ali,” in his hometown of Louisville, KY, but in New York Ham4Ham gave their own good-by. Today a public Muslim service will be held at the city’s Expo center. 14,000 free tickets were made available to his fans to pay their respects during Thursday’s service, a brief program of prayer, called a jenazah. Authorities are going after ticket scalpers who tried to profit off selling funeral tickets. A total of 18,000 people are expected to attend the service. People have been bringing flowers and photos to a memorial at the Muhammad Ali Center and left tributes on a wall at the the Kentucky Center for Performing Arts.  Thursday’s service, overflowed crowd at Freedom Hall — where Ali defeated Willi Besmanoff on November 29, 1961, his last fight in the city. 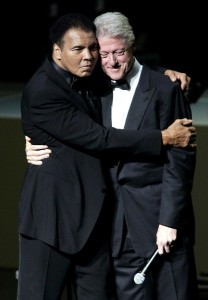 Those who can’t make it inside the arena can watch the funeral streamed live on the Muhammad Ali Center’s website. “To be properly prepared for burial, prayed over and then buried is a right owed to every single Muslim. If no one fulfills those rights, then the entire community has fallen into sin.  In the case of someone of Muhammad Ali’s stature, to leave any of those rights unfulfilled would be a crime,” stated his organizers.
On Friday a funeral procession will take place through the streets of Louisville before the public memorial service at the KFC Yum! Center. The main service has in attendance former President Bill Clinton,  sportscaster Bryant Gumbel, comedian and close friend Billy Crystal delivering eulogies.
There will be a private burial at Cave Hill Cemetery on Saturday.
President Obama will not be attending Ali’s funeral he will be be attending his daughter Malia’s high school graduation in Washington, D.C.
Related ItemsBill ClintonBilly CrystalHam4HamHamiltonLin-Manuel MirandaMuhammed AliNewPresident ObamaTimes Square Chronicles
Broadway