Hamilton Steals The Easter Bonnet As A Record-Shattering $5,528,568 Was Raised

Hamilton Steals The Easter Bonnet As A Record-Shattering $5,528,568 Was Raised 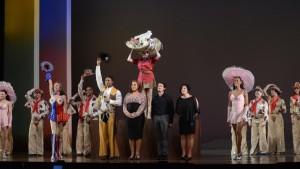 The 30th annual Easter Bonnet Competition, celebrated six weeks of fundraising by 58 Broadway, Off-Broadway and national touring companies, raising a record-shattering $5,528,568. This was the largest grand total from any fundraising campaign in Broadway Cares history. A surprise performance by rocker Stevie Nicks, two top awards for Lin-Manuel Miranda and the cast of Hamilton, and more than 230 of the best actors, singers and dancers in New York. 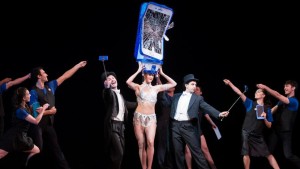 The award for bonnet design went to the company of An American in Paris for its two-sided bonnet of an exploding smartphone, created by Billy Hipkins, Veanne Cox, Christy Morton, Shannon Rugani, Kelly Saxon, Jeffrey C. Sousa and Tory Trowbridge.

The company of Hamilton took top presentation honors for turning their opening number into an homage to Stephen Sondheim’s Sweeney Todd. Miranda chillingly portrayed the “demon barber of Fleet Street” as his fellow cast members retold the dark, twisted tale.

The company of Fun Home was runner up turning West Side Story’s “Gee Officer Krumpke!” into a plea to Miranda to write a show for them. But they ultimately realized that they could control their own destinies by creating the roles themselves, just as Miranda has done.

This year’s top fundraising award also went to Hamilton, which raised an astounding $516,029.

Here’s the breakdown of this year’s other fundraising leaders:

Max von Essen and Brandon Uranowitz from An American in Paris lamented theatre audiences’ addiction to taking photos and using their smartphones during shows with the comedic “Turn It Off, Seriously,” topped off by their award-winning bonnet.

In a jubilant, drum-infused song, South African cast members from Broadway’s The Lion King praised the power of humanity to overcome even the biggest challenges when united by one cause. The number featured Snothando Mbanbo, a South African teenager, and Nosipho Duma, co-founder of Umthwalume Community Services, one of more than 50 HIV/AIDS organizations funded by Broadway Cares/Equity Fights AIDS and The Lion King in South Africa.

Dancers from Broadway’s Wicked, in a piece choreographed by Josh Daniel Green, delivered an elegant and touching performance to Andra Day’s “Rise Up,” sung live by cast member Daniel Quadrino.

The company of Off-Broadway’s Avenue Q took the opportunity to add a humorous “In Memoriam” tribute to Easter Bonnet Competition, bidding farewell to everything from American Idol to Chris Christie’s political career.

Disaster!’s Kevin Chamberlin was joined by special guest Andrew Keenan-Bolger from Tuck Everlasting to recreate their “Alone in the Universe” from Seussical the Musical. The pair had reunited earlier this month as part of a post-show fundraising auction for Broadway Cares, organized by Disaster! creator Seth Rudetsky.

The show ended both days with Rachel York from Disaster! delivering an emotional and powerful rendition of the traditional Easter Bonnet Competition anthem, “Help is on the Way,” written by David Friedman.

Since the Easter Bonnet Competition began in 1987, the event has raised more than $68.8 million for Broadway Cares/Equity Fights AIDS.

Lawrence HarbisonMay 23, 2022
Read More
Scroll for more
Tap
Waitress A Delightful Tuneful Morsel
The Place We Built a History and a Present We Should Know