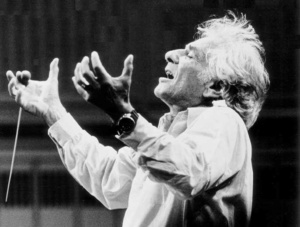 “Leonard Bernstein at 100,” is a two-year global celebration of the life and career of the 20th century cultural giant, featuring more than 1,000 events on six continents. A kickoff at The John F. Kennedy Center for the Performing Arts officially launch the celebrations which continue worldwide through the end of August 2019.

“‘Leonard Bernstein at 100’ will explore my father’s legacy from every angle – and that’s a lot of angles,” Jamie Bernstein said. “I’m thrilled to be part of this once-in-a-lifetime opportunity to connect his multiple achievements to the 21st century, as well as introduce his legacy to new generations.”

Documentary films are in the making, covering a broad range of topics in Bernstein’s life. His musicals will receive revivals throughout the world, including a worldwide tour of the acclaimed BB Promotion’s West Side Story; productions of Wonderful Town in Germany and Austria; and performances of Mass in London, Paris, Los Angeles, Glasgow, and Austin. Bernstein’s opera A Quiet Place will be presented in Vienna and Budapest, among other cities.

Exhibitions are planned in multiple cities. The Grammy Museum is preparing a major Leonard Bernstein exhibition — including artifacts from his composing studio (on loan fromIndiana University’s Jacobs School of Music) —which will travel over two years to cities across the United States. Host organizationsinclude The New York Public Library for the Performing Arts in New York City, The Kennedy Center in Washington D.C., and the Skirball Cultural Center in Los Angeles. Additionally, the National Museum of American Jewish History in Philadelphia will be mounting an exhibition “Leonard Bernstein: The Power of Music”. 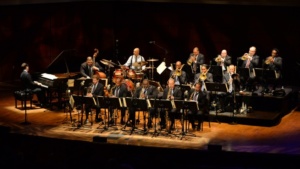 The Jazz at Lincoln Center Orchestra with Wynton Marsalis

The Leonard Bernstein Memory Project is a growing collection of Bernstein-related memories from around the world. Fans and friends of Bernstein are invited to contribute their reminiscences on the newly renovated Centennial website. (For more information, visit the memories page.) 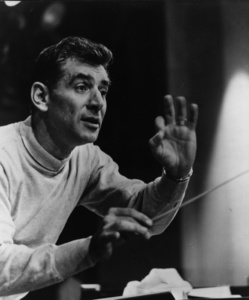 Starting off the night was an audience favorite, “Tonight,” from West Side Story arranged by Richard DeRosa. Mr. DeRosa met Lenny at 17 at Tanglewood. The maestro show him a yellow papered note book which had all his compositions written in long hand. The song featured a solo by Alto Saxophone player Ted Nash. Continuing with the West Side Story theme came the cooler than “Cool” with Carlos Henriquez on Bass and the fabulous drummer Marion Felder slapping those skins. The song had a tom tom feel. All of the Bernstein repertoire had a unique feel and take this evening.

Next up was Vincent Gardner’s take on “It’s Love,” from Wonderful Town. Sparking with a bright tempo Kenny Rampton on trumpet and Chris Crenshaw on trombone made their instruments capture the moment. Gardner’s next arrangement of “Ain’t Got No Tears Left,” a cut song from On The Town had Dan Nimmer on piano playing counter harmony with Paul Nedzela on baritone sax. Gardner’s introduction to Broadway was when he subbed on the show Wonderful Town and grew to love Bernstein. Elliot Mason on trombone, Greg Gilbert on trumpet and Walter Blanding on tenor sax were  featured as well.

“Conversation Piece,” from Wonderful Town arranged by Vincent Gardner featured Sherman Irby on Alto Sax and sounded as if the piece had been set in New Orleans.

“Lucky to Be Me,” from On the Town arranged by Richard DeRosa was a tribute to Count Basie.

A rarely heard “Lamentation,” from Symphony No. 1, “Jeremiah” arranged by Vincent Gardner featured Victor Goines on tenor sax and Marcus Printup on trumpets. This version had a snake charmer flare.

I was excited to hear “Gloria in excelsis,” from Mass arranged by Vincent Gardner, but the original orchestration was barely heard in this arrangement. It’s almost as if these pieces had been turned into different songs all together.

Wynton Marsalis excelled on a medley: “Touches / Lonely Town /Paux de Duex” from On The Town and “Somewhere” arranged by Richard DeRosa featured Wynton Marsalis added a conflict of emotions embeded into the instrumentation.

The perfect closing to the evening was “Some Other Time,” from On the Town arranged by Richard DeRosa. This piece sounded like a carousel of time, as a music box closed on a perfect evening.

Rose Hall has perfect acoustics, which gives a warmth and clarity to the sound of jazz. The night I was there it was almost like a Roman Stadium where instead of lions roaring music calmed the savage beasts.

Genevieve Rafter KeddyOctober 2, 2022
Read More
Scroll for more
Tap
Chita Rivera and Tommy Tune Were Honored For Helping Opera Stars of Tomorrow
The Stowaway: A Shining Gem for All Ages