Happy 4th of July a Day of History 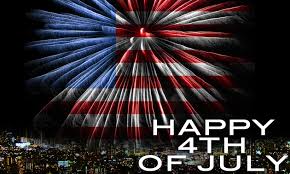 Happy 4th of July a Day of History

“In the truest sense, freedom cannot be bestowed; it must be achieved.” – Franklin D. Roosevelt

The Fourth of July is also known as Independence Day and has been a federal holiday since 1941. However the tradition of Independence Day goes back to the 18th century and the American Revolution. On July 2nd, 1776, the Continental Congress voted in favor of independence, and two days later delegates from the 13 colonies adopted the Declaration of Independence, a historic document drafted by Thomas Jefferson. From 1776 to the present day, July 4th has been celebrated as the birth of American independence, with festivities ranging from fireworks, parades and concerts. Family gatherings and barbecues add to the festivities.

In the pre-Revolutionary years, colonists had held annual celebrations of the king’s birthday, which traditionally included the ringing of bells, bonfires, processions and speechmaking. In 1776 some colonists celebrated the birth of independence by holding mock funerals for King George III, as a way of symbolizing the end of the monarchy’s hold on America and the triumph of liberty. Concerts, bonfires, parades and the firing of cannons and muskets usually accompanied the first public readings of the Declaration of Independence, beginning immediately after its adoption. Philadelphia held the first annual commemoration of independence on July 4, 1777, while Congress was still occupied with the ongoing war.

George Washington issued double rations of rum to all his soldiers to mark the anniversary of independence in 1778, and in 1781.

In 1870, the U.S. Congress made July 4th a federal holiday; in 1941, the provision was expanded to grant a paid holiday to all federal employees.