Rodgers & Hammerstein’s Oklahoma! opened on Broadway at the St James Theatre, March 31, 1943. As we mark the 75th Anniversary of one of Broadway’s most beloved musicals, Oklahoma!  transformed the future of theater. The first collaboration of Richard Rodgers and Oscar Hammerstein, the musical marked the birth of a new genre, the musical play, which for the first time seamlessly integrated story, song and dance.

Oklahoma! ran for a total of 2, 212 performances (before Oklahoma!, no Broadway show had run longer than 500 performances) and closed on Broadway on May 29, 1948. There have been four Broadway revivals since the original production in 1951, 1953, 1979 and 2002. The first National tour began in October, 1943 at the Shubert Theater in New Haven (where the show had premiered) and ran for nearly 11 years, ending the run at the Shubert Theater in Philadelphia in May, 1954. Rodgers and Hammerstein won a special Pulitzer Prize for Oklahoma! in 1944. 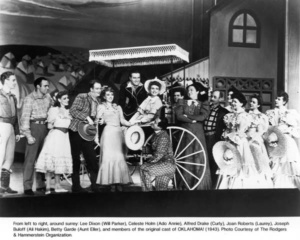 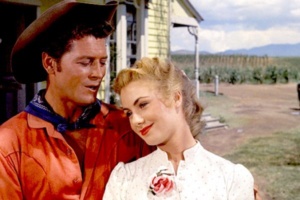 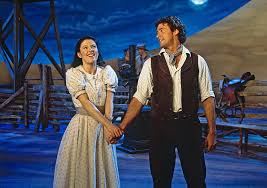 Rodgers & Hammerstein went on to have the most successful partnership in musical theater history. Following Oklahoma! was Carousel, State Fair, Allegro, South Pacific, The King and I, Me and Juliet, Pipe Dream, Cinderella, Flower Drum Song and The Sound of Music, collectively earning the team 42 Tony Awards®, 15 Academy Awards®, 2 Pulitzer Prizes, 2 Grammy Awards®, and 2 Emmy Awards®.