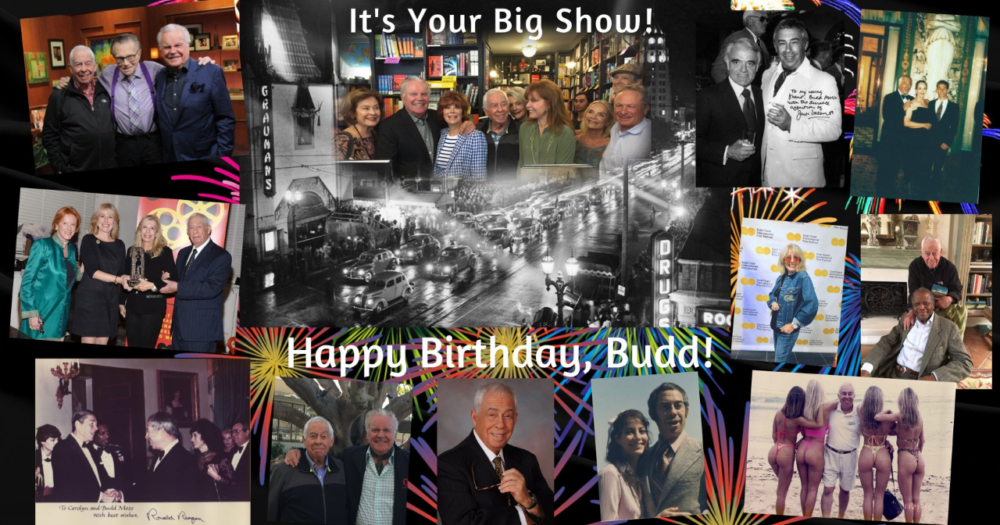 “Budd Burton Moss is Hollywood Royalty who gifted Broadway with his presence when he agreed to place the great Cyd Charisse in Grand Hotel, the musical.  BOOM!  The show instantly gained global glamor.  As the Publicist my phones exploded.  Then the Box Office blew up.  We were living in the center of an EVENT.  Some say Mr. Moss knows everyone in show business.  Personally, I think he knows everyone in the world.” -Judy Jacksina

Having grown up in Hollywood, Budd Burton Moss grew up in the shadow of the Hollywood Hills. His father Lou B. Moss was film editor at 20th Century Fox and his uncle was iconic Sam Zimbalist; was the producer from Qua Vadis and Ben Hur. In his youth he was an actor and aspiring matador. Budd Burton Moss’ life has been extraordinary.

Starting out with acting ambitions and then transitioning to a talent agent, Moss found himself in the company of countless Golden Age stars such as Clark Gable, Bette Davis, Tyrone Power, Spencer Tracy, Katherine Hepburn, and Sidney Poitier(who was Best Man at his wedding) to name a few. Through the years, Moss represented the likes of Joel Grey, Robert Vaughn, Tom Cruise, Juliet Mills, Hugh O’Brian, Cliff Robertson, Tippi Hedren, Mia Farrow, Tom Bosley, Elizabeth Montgomery, John James (Dynasty) Cliff Robertson, and most importantly, Rita Hayworth with whom he became close friends until the end of her life.

Budd was married to actress, Ruth Roman (Strangers on a Train) to whom he said he was introduced by Anthony Quinn at a Tijuana bullfight, that ended in an annulment after four years. He was briefly engaged to the actress Carolyn Jones, ex-wife of writer-producer Aaron Spelling, before marrying his current wife, also named Carolyn — whom he met on a blind date. One of his best friends was, Larry King, who wrote the forward to his book, “Hollywood: Sometimes the Reality Is Better Than The Dream.”

Hollywood Golden Era Award pays tribute to film legends who may not have been appropriately honored during their lifetimes, and whose legacy is in danger of becoming forgotten by newer generations of filmgoers. The Budd Burton Hollywood Golden Era Award helps preserve the legacy of the ‘Golden Age’ of Hollywood, and spotlight the stars who made it great. There are so many accomplished and talented actors from that era whose legacy is in danger of becoming a mere footnote in history. At the Gold Coast International Film Festival with this award they hope that this recognition will keep those legacies alive. Look for an announcement of the next award recipient. In the meantime Happy Birthday!

G. H. HARDINGJanuary 18, 2023
Read More
Scroll for more
Tap
Can We Ever Pass Over
The Glorious Corner