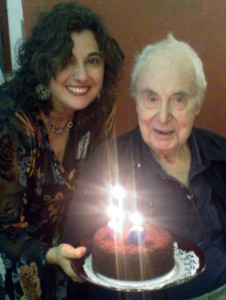 This month, legendary playwright, singer, editor and translator and Theatre Hall of Fame inductee Eric Bentley turned 99 years old. In celebration of this milestone and a century of his contributions to the international theatre world, a special one night-only birthday celebration has been announced:  A Centennial Tribute Concert” will take place on December 7, 2015 at 8:00 PM.

Eric Bentley was born in England in 1916, became an American citizen in 1948, and was inducted into the (American) Theater Hall of Fame in 1998. In 2011 the American Academy of Arts and Letters awarded him their Gold Medal for his contribution to belles lettres. He had a long and distinguished career as playwright, translator, critic, and performing artist. Bentley also taught at leading universities, giving the Christian Gauss Lectures at Princeton and the Norton Lectures at Harvard. He became Brander Matthews Professor of Dramatic Literature at Columbia. Three volumes of his plays were published as Rallying Cries, Monstrous Martyrdoms, and The Kleist Variations, and Broadway Play Publishing Inc. recently published four Bentley titles: Round One, Round Two, A Time to Die & A Time to Live, and The Sternheim Trilogy. At least two of his many critical studies are now classics; The Playwright As Thinker and The Life of the Drama. In “The Brecht Memoir,” appended to his book, Bentley On Brecht, he details his personal association with Bertolt Brecht. The latter’s chief translator and interpreter in the English-speaking world, Mr. Bentley is also editor of the Grove Press’s Brecht edition.

The evenings celebration will feature reminiscences, anecdotes and readings from Eric Bentley’s classic works by Tony and Pulitzer Prize-winning playwright Tony Kushner; celebrated playwright/actor/director Austin Pendleton; Bill Coco of The Actors Studio; Michael Paller of The American Conservatory Theater; Louise Kerz Hirschfeld, theatre historian and president emeritus of The Al Hirschfeld Foundation; James Shapiro, Edward Mendelson and Phillip Lopate of Columbia University; and Roger Copeland, Professor of Theater and Dance, Oberlin College and Conservatory.
The evening’s musical program will feature a recital of Hanns Eisler songs in English versions by Eric Bentley and performed by celebrated soprano Karyn Levitt accompanied by Eric Ostling from their forthcoming CD, “Eric Bentley’s Brecht-Eisler Songbook,” available from Roven Records starting in January 2016.  The celebration will also feature Songs For Mother Courage by Darius Milhaud and Eric Bentley, performed by Karyn Levitt with the Metamorphosis Chamber Orchestra conducted by Glen Roven, and dedicated in solidarity with the people of Paris and in memory of the victims of the recent atrocity.
Michael Riedel of The New York Post and the weekly TV chat program “Theatre Talk” will host the evening.
“Eric Bentley introduced me to the idea that the passion for theatre could actually involve thought,” says Austin Pendleton, “And that thought would not only not work against the passion but would actually deepen it. I think he introduced that idea to a lot of people. Or, if he didn’t introduce it to them, he made it richer and more exhilarating. He’s irreplaceable.”
“Happy Birthday, Eric Bentley! A Centennial Tribute Concert” is presented by Royal Road Productions.
LISTINGS INFORMATION: “Happy Birthday, Eric Bentley! A Centennial Tribute Concert” plays one night only, Monday, December 7, 2015 at 8PM at The Town Hall,123 West 43rd Street. Tickets are now on sale to the public  at Ticketmaster.com
Related ItemsAustin PendletonBertolt BrechtEric BentleyHanns EislerKaryn LevittMichael RiedelSuzanna BowlingTimes Square ChroniclesTony KushnerTown Hall
Music