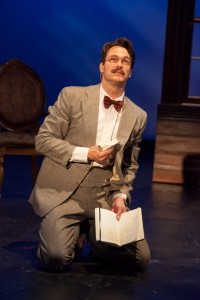 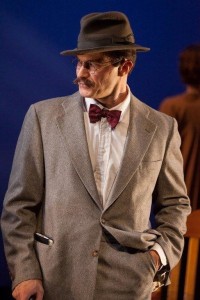 James Joyce, is one of the most provocative and influential writers of all time, had his creativity, imagination, and desire transformed by Nora Barnacle.
Himself and Nora, a new musical with book, music, and lyrics by Jonathan Brielle will play the Minetta Lane Theatre (18 Minetta Lane, between Sixth Avenue and MacDougal Street) beginning on May 14th. Directed by Michael Bush, produced by Cherie King and executive produced by R. Erin Craig, Himself and Nora will officially open on June 6th.
It was one of the world’s great romances. She was the country girl from Galway whose burning sexuality and acerbic wit inspired the genius of James Joyce. Himself and Nora is a passionate musical that reveals the private life of one of modern literature’s most controversial figures and illustrates the untold story of Joyce’s lifelong love and muse Nora.
Himself and Nora stars Matt Bogart (Jersey Boys, Miss Saigon) as James Joyce. Further casting will be announced in the coming weeks.
Developmental productions of Himself and Nora were produced by the Old Globe Theatre; Hamilton Stage and the New York Musical Theatre Festival (NYMF). Additional developmental work was done with the James Joyce Center in Dublin, Ireland.
Himself and Nora will play at the Minetta Lane Theatre, (18 Minetta Lane, between Sixth Avenue and MacDougal Street) beginning May 14th. Opening night is Monday, June 6th. Performances are Tuesdays at 7pm, Wednesdays at 2pm and 8pm, Thursdays at 8pm, Fridays at 8pm, Saturdays at 2pm and 8pm, and Sundays at 3pm.
Matt Bogart appeared on Broadway: Jersey Boys (Nick Massi), Aida (Radames), Miss Saigon (Chris, also National Tour), The Civil War, Smokey Joe’s Café (also filmed for TV & DVD) and National Tour of Camelot (Lancelot) with Lou Diamond Philips.  World Premieres: Himself & Nora at The Old Globe, Zhivago (San Diego Critics Award), Two Cities (CT Critics Award Nom), Ace, Camille Claudel, People Like Us.  Mr. Bogart has performed at Carnegie Hall, Lincoln Center, The Kennedy Center and is an Affiliated Artist for Arena Stage having played in Orpheus Descending (Val) and Camelot (Helen Hayes Award Nom).  Film/TV: HBO – “VINYL” (recurring as Robert Goulet) produced by Martin Scorsese & Mick Jagger,”SMASH” (recurring as JFK), “Law & Order and L&O: SVU.”  Recordings on iTunes:  Matt Bogart Simple Song, Himself & Nora, etc.  www.MattBogart.com
www.HimselfAndNoraMusical.com
Related ItemsBroadwayHappy St. Patricks Day With Broadway Star Matt Bogart Singing from Himself and NoraHimself and NoraJames JoyceJersey BoysJessica BurrowsMatt BogartMiss SaigonNewSt Patricks DaySuzanna BowlingTimes Square Chronicles
Off Broadway