Happy Talk is Not So Happy Despite Susan Sarandon 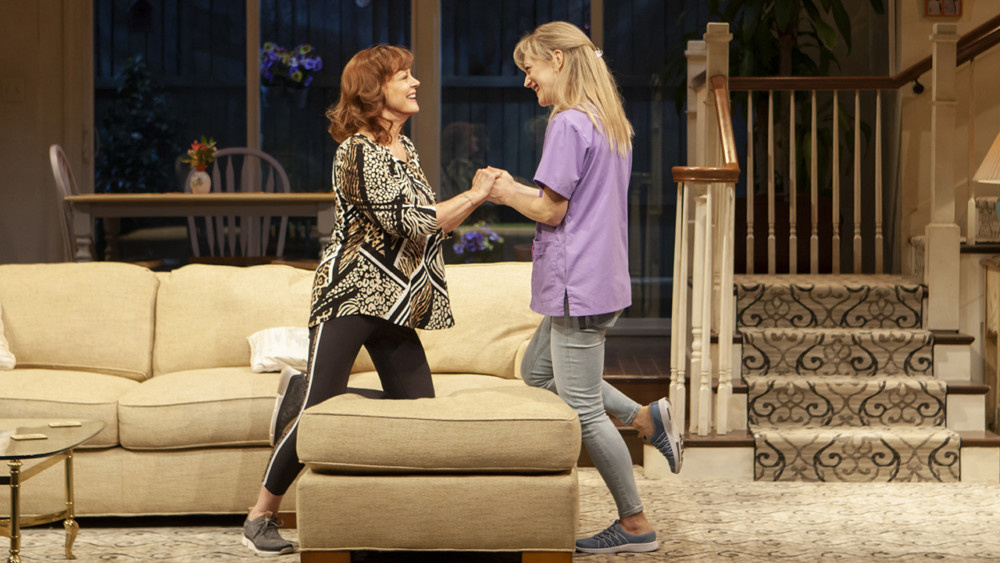 Happy Talk is Not So Happy Despite Susan Sarandon

Seeing Susan Sarandon act in Jesse Eisenberg’s (The Social Network) Happy Talk, is a delight, the play not so much.

Here Ljuba (Marin Ireland), an illegal Serbian immigrant is taking care of Lorriane’s (Sarandon) elderly mother, who is housebound in the other room and her husband Bill (Daniel Oreskes) who has MS. Bill in a silent rage reads books on the Civil War and sipping scotch.

Lorraine who sees herself as the consulate actress has been appearing in amateur productions at the local Jewish Community Center. Here, Currently she has taken on Bloody Mary in their latest production of South Pacific. She justifies this by stating “Bloody Mary is “the most dynamic character in the show, a severely broken woman.”

When Lorianne comes home from rehearsals it is clear she is the broken woman and just a little off kilter. She is amazingly self absorbed and can not stand being alone. When Bill ignores her and leaves, Lorraine attaches unhealthily onto Ljuba. She day dreams to her what will happen with the house including her in the plans. When Ljuba seeks Lorraine’s help in finding an American man to marry so she can obtain a green card, Lorinne brings in her Lt. Cable Ronny (Nico Santos). Even though Ronny is gay and in a relationship, he is willing to marry her in exchange for the $16,000 Ljuba has hidden underneath a mattress.

As Ljuba and Ronny get closer and Lorraine losses her own daughter’s (Tedra Millan) love, things unravel. Lorraine has no intention of being left out or alone.

Marin Ireland and Sarandon both seem out of their elements, even though both are amazing actress. They do each manage to find moments of vulnerability and truth, it just doesn’t last, but that is mostly due to the writing.

Scott Elliott the director of the New Group keeps things plodding along. The set by Derek Mclane, lighting by Jeff Croiter, costumes by Clint Ramos, sound design by Rob Milburn and Michael Boded are all done well.

Eisenberg’s play though the motifs of South Pacific, uses this to drive the plot, which boarders on the dark. Not enough is given to flesh out these characters so that we truly care. This is Eisenberg’s fourth work and the only one Eisenberg is not appearing in. Like Eisenberg this play is quirky, disturbing and not quite complete.

I will say, I really did watch Sarandon act and found her quite absorbing.