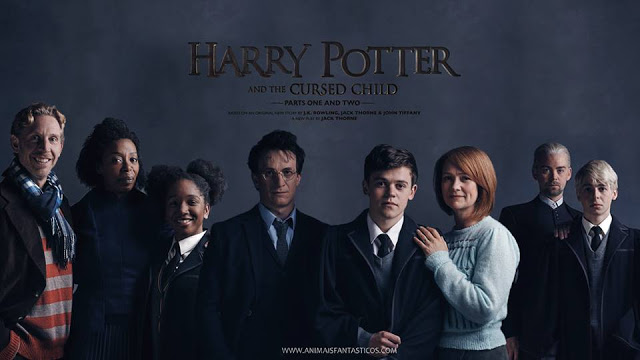 Start saving your money because Harry Potter and the Cursed Child is worth every penny and you will have to see parts 1 and 2. From the moment you make your way into the newly renovated Lyric Theater, the touches by set designer Christine Jones are spectacular. Then there are the illusions by Jamie Harrison, “Illusions & Magic,” and the “Original Special Effects Designer” Jeremy Chernick. The moment you enter you will recognize the train station and the clocks from Hogwarts School of Witchcraft and Wizardry. From the carpet to the bricks on the wall, every detail is done to perfection. Transferring intact from London, past and present Potter characters make it on stage, either in person or in headdress thanks to Carole Hanckock (Wigs) or Katarina Lindsey (costumes). Albus Dumbledore appears in a painting.

It has been nineteen years and Albus Potter (Sam Clemment) and Scorpius Malfoy (Anthony Boyle) are starting Hogwarts. Unlike their fathers, these two teenage outcasts become best friends. Albus has a chip on his shoulder. He hates being Harry Potter’s (Jamie Parker) son. Harry, now 37, heads the Magical Law Reinforcement at the Ministry of Magic. Both teens feel like a failure to their rather famous fathers. Trying to right what Albus sees as wrong, in rebellion, he steals a time machine and tries to go back in time to save Cedric, who was killed while pairing up with Harry in the Triwizard Tournament. For this piece of information, you need to have read the book, seen the movie or read the playbill.  Needless to say, Albus and Scorpius mess up the present in a delightfully evil way. Harry, Hermione Granger (Noma Dumezweni) – the Minister of Magic – Hermione’s husband, Ron Weasley (Paul Thornley), Harry’s wife, Ginny (Poppy Miller), and Draco Malfoy (Alex Price) have to come together to save the day. In the end, what matters most is a father’s relationship with his son.

With an excellent 40-member cast it is hard to stand out, yet Anthony Boyle as Scorpius, Jamie Parker as Harry, Lauren Nicole Cipoleti as Moaning Myrtle, Jessie Fisher as Delphi Diggery, Alex Price as Draco, Poppy Miller as Ginny Potter, and Bryon Jennings as Severus Snape and Lord Voldemort all take your breath away in their renditions. 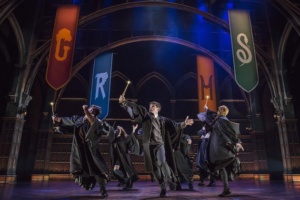 Choreographer Steven Hoggett also steals the show with his movement. Together with Imogene Heaps haunting music, Hoggett has created dance moments that move the show forward and change the set with a flowing of capes and sleight of hand. 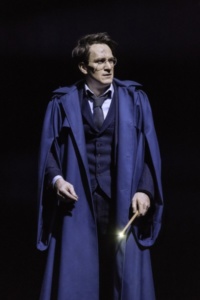 The special effects are dazzling, and I cannot say enough about them. Characters morph into another before our eyes, others tumble out of flaming fireplaces and things I cannot talk about make this show magical and wizardly. Just when you think, wow they have done enough, they surprise you with an even more spectacular feat.

The original story by J.K. Rowling, script by Jack Thorne, and director John Tiffany elevate relationships on all levels, especially a father and his son. I found this show touching, as well as exciting.

John Tiffany’s direction is superb, and I would be stunned if this show doesn’t take home a hat full of Tonys.

I wish this show for all the Harry Potter and non-Potter fans alike, but the evil reality is the cost will be at least $300 per person. The good news is that there is a “Friday Forty” ticket lottery. Each Friday beginning March 9, the two-part play will release 40 tickets to every performance at $40 ($20 per part). Entries will be accepted through HarryPotterthePlay.com and the TodayTix website and app from 12:01 AM Friday to 1 PM. Winners will be notified by 5 PM and may purchase up to two tickets per part (in consecutive performances).

Harry Potter and the Cursed Child is theatrical wizardry and a wonderful way to spend time in a theatre. 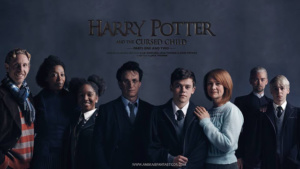