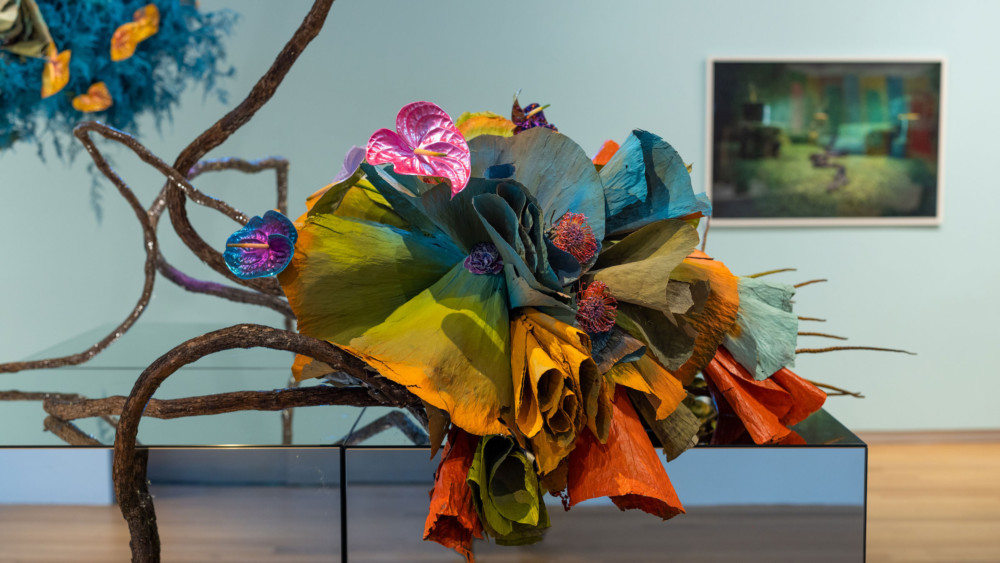 The Museum of Arts and Design (MAD) first opened its doors in 1956 at 2 Columbus Circle. MAD champions contemporary makers across creative fields, presenting artists, designers, and artisans who apply the highest level of ingenuity and skill to their work. Right now on exhibit is Flower Craft which celebrates the creative visions of botanical artists working at the forefront of contemporary floral design. Inspired by nature’s ephemerality and its inimitable palettes, these artists are investigating all stages of the plant life cycle, from seed to germination to decay, to interpret nature in sculptural form. As they expand the boundaries of materials and creative expression, the artists are also engaging in a variety of aesthetic traditions, from early modern European still life painting to the eighteen-century picturesque to the hyperreality of the twenty-first-century digital realm—all of which will be explored in the exhibition.

Each week, a celebrated botanical artist will fill the Flower Craft gallery with evocative arrangements or installations.

Lutfi Janania
On view May 31–June 5
Lutfi Janania is a Honduran botanical artist raised on a bioreserve among the rain forest and mountains in San Pedro Sula. His sculptures, comprised of exquisite dry and hydrated natural materials, are surreal, unrealized portraits of the artist’s imagined worlds. Janania was the winner of season two of HBOMax’s Full Bloom and his studio, ROSALILA, is located in Brooklyn, New York.

Doan Ly
On view June 7–12
Doan Ly, founder of a.p. bio, is a multidisciplinary artist whose practice integrates the fields of floral design, photography, and video. Ly’s work has been published in Vogue Spain, China, and Italy; The New Yorker, The Atlantic, and Kinfolk, among others. Her commercial clients include Moschino, Victoria’s Secret, Carolina Herrera, Zara, and many more. Born in Vietnam, Ly immigrated to the United States at the age of eight and grew up in Minnesota.

Manu Torres
On view June 14–19
Manu Torres is an artist based in Portland, Oregon. His floral arrangements often involve a dialogue between the artificial and the natural, incorporating paper, fabric, paint, and feathers to imitate and exaggerate natural beauty in a hyperreal way. His work has been featured in Elle Decor magazine and he was also named by Domino magazine as a top new floral designer to follow. His recent solo exhibition at Russo Lee Gallery was an ArtForum Critic’s Pick.

Emily Thompson
On view June 21–26
Emily Thompson is the founder of Emily Thompson Flowers in New York City. Born in Vermont, Thompson earned an MFA in sculpture from UCLA. Inspired by the eighteenth-century theory of the picturesque, she has designed dramatic naturalistic arrangements and installations for the Obama White House, MoMA’s Modern restaurant, Bergdorf Goodman, T magazine, Jason Wu, and other notable clients.