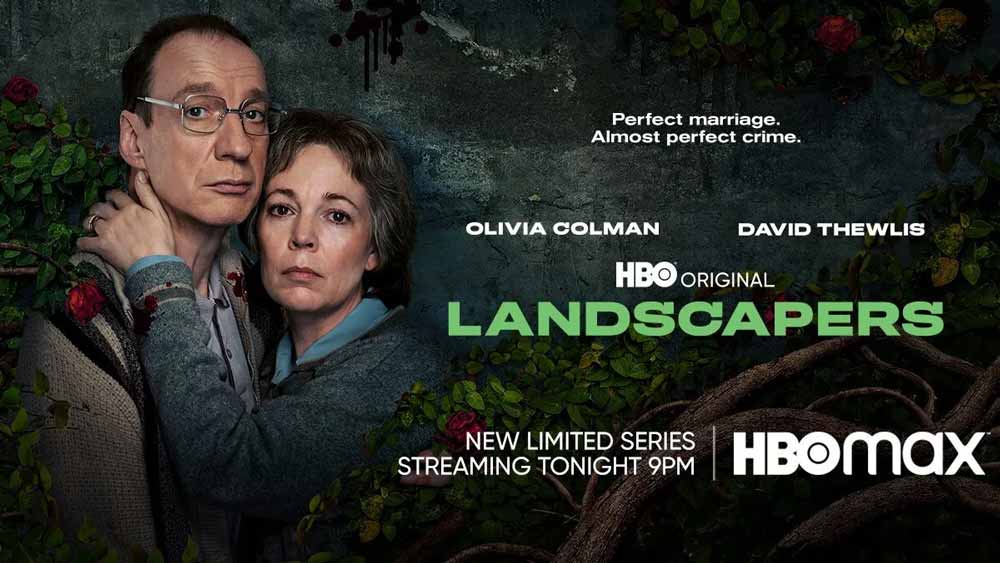 “I can’t let Susan down. She’s very fragile.” It’s an idea presented numerous times by a totally devoted husband in the Sky-HBO co-production of “Landscapers.” Whether it is figmant of his imagination, a truth she later denies, or not is anyone’s guess, but inside his mind, the construct rings utterly true. The idea, and the word, ‘fragile‘ play an integral part the deeper we go into this thoughtfully and Immaculately crafted construction. The production deconstructs, most profoundly, the artifice of the complicit structure that lives between reality and fantasy, theatrically uncovering the somewhat convoluted murderous tale of the true-to-real couple, Susan and Christopher Edwards, played to perfection by two of the world’s finest actors, Olivia Colman (“The Lost Daughter“; “The Crown“) and David Thewlis (numerous “Harry Potter” films). It truly is one of those master class moments in theatrical storytelling by everyone involved.

The couple we are invited into here, as written most impeccably by Colman’s husband, Ed Sinclair (“Screenshot“; “One Day“) are complicit victims; of familial trauma, but also of intense speculation by an overly cynical police force determined to prod them into submission. They say they are innocent of murder, even though both were charged and convicted of murdering Susan’s parents. It’s a fascinated meticulous dive into alternate realities, artfully displaying the impossibility of ever really knowing what happened that violent night in England between them all. The ultimate gift given, though, is seeing the formulation played out so exquisitely by Thewlis and especially Colman, who, by the way, gives yet another detailed and outstanding performance in a year when she just keeps delivering them one after the other. A truly remarkable accomplishment.

As directed by the fascinatingly succinct Will Sharpe (“The Electrical Life of Louis Wain“), they make no effort to construct a ‘who done it‘, but really they all get more invested in a ‘how‘ and ‘why‘ did it happen kind of rollout. Which version we supposed to take in and run with is a complicated position to make. And from the lopsided news reports relaying the facts presented in court by the police who investigated the double murder, it truly becomes more impossible as the episodes dig deeper. As presented, the police seemed determined to wrap this around the ‘fragile‘ Susan before they even meet and interview her, but the couple’s alternate version is also complicated by some puzzling facts and details. Were her parents the cruel heartless people that Susan and Christopher portray in their telling? Or is that a fabrication to justify an deadly action? The vision presented by the superb writer Sinclair, through the utter brilliant craftmanship of the actors involved, is one of a truly devoted couple caught in an impossible trap. But it’s Susan, and Colman’s detailed portrayal, that captivates us most wholeheartedly. Her version of the events surrounding the death of her parents seems lost somehow, possibly in the trauma of being the child of two horrid and abusing people, or maybe it’s a crack in her connection to reality, one that is utterly heartbreaking and totally convincing.

The story starts off almost simply, with a straightforward almost idyllic cinematographic vision, courtesy of the illustrious cinematographer Erik Wilson (“The Double“), of Susan and Christopher Edwards, a librarian and an accountant from Dagenham, living out their entwined life with such love and tender devotion to one another in Paris. It seems blissful, but as the first of four episodes tick their way forward, the unraveling begins to be displayed with conviction. All of the complicated cracks and internal artifice become more and more exposed in their creation, literally and figuratively speaking, particularly as the story moves through the exposition and episodes. We know early on that the two will be convicted of murdering her parents, burying their bodies in the back garden, and concealing their deaths for the next 15 years, but we don’t know all the harrowing in-between stuff. The outcome is told time and time again during each episode. But the intense intersection and constructions of all of their realities is really what we are tuning in for.

I’ve “done something rather silly,” Christopher tells his stepmother midway through the first of four episodes, when he calls her from France, secretly, to ask for some financial help. His French is not strong enough to get a job there, but he can’t quite bring himself to tell his loving wife the awful honest truth. Slowly and methodically we learn that they are in this other country not out of a sense of adventure and romance, but one of necessity, although not named early on. They are basically out of money, even as Susan continues to buy Hollywood memorabilia, a reckless obsession, but also a symptom of a disconnect from a reality they are trying to live through. Christopher’s confession to his stepmother doesn’t bring about the results he was hoping for though. She relays the information quite quickly to the authorities, starting an avalanche of complications and the unearthing of the murderous crime that the couple thought or hoped they had left behind. And the police don’t waste a minute trying to bring the couple back home for questioning.

The fabrications of telling the tale, with all the bells and whistles from wigs to staged recreations are unveiled, dramatically constructed through stark lighting and fantastically formulations inside a sound stage that fade and resurface as the couple return to the UK, get questioned, charged, and taken to trial. The story and the formality of the unfolding shifts in and out of a reality that we can only imagine exist most succinctly inside Susan’s head. Thanks to the dynamic work of production designer Cristina Casali (“The Pursuit of Love“), the visual and design aspects start to dissolve into a cinematic deconstruction that can only be a metaphorically paralleling of Susan’s grasp on reality. The color drains away, and we slip, almost hypnotically, into separated worlds, heavily influenced by French films and American westerns that generally star Gary Cooper, Susan’s traumatic touchstone if there ever was one. It’s quite the dramatic shifting of vantage points, digging its heels into a wild west shoot-out that retells a story that Susan seems to most desperately need to believe in. It’s breathtakingly abstract, yet the idea never dissolves into anything so bizarre that it takes us out of the melodrama of these two partners in some sort of crime. It surprisingly rides us into the earth more deeply, giving us a glimpse of their inner truth, and a taste of their relationship that only makes us want to believe more wholeheartedly in their pain.

Some of the structurings around the police officers’ behavior seem to be from a different kind of film, something cruder or mean-hearted. Especially when it is side stacked by the exquisite and engaging work done by Colman and Thewlis. Even though it never fully rights itself completely, the retelling starts to balance out, particularly as we get a deeper insight into the lead officer’s own complicated familial history. Hard as she is, Emma, as played strongly by the uncompromising Kate O’Flynn (“Bridget Jones’s Baby“), finds fury in her musing on what being “fragile” really means. “I hate that: fragile people,” “It means you’re in charge … You’re the pain in the arse, basically,” and in that one well-polished and performed scene, the trajectory shifts its aim.

“Just have to stick to the plan,” they say to one another, frequently. Financial facts and rational pieces of an unknown puzzle give way to a truth that the police stick solidly to, one that leads these two into a prison sentence. But another truth, artfully told by Susan and Christopher inside the imaginative “Landscapers“, casts a more emotionally complex story, one filled with harrowing cruelty, abuse, and desperation. Blind devotion, self-preservation, and intricate emotional dynamics complicate the perception of who the victims truly are in this consequential tale. It tugs on our heart and soul while making us wonder, rightfully so, what really happened that night, and for what reason. Which partner is the garden, and which one is the gardener? We will never know, as this couple is solidly unified, form-fitted into one construct that is riding off together through the barren landscape of the wild west. With the real story, if we haven’t heard it already, galloping away beyond our reach.

Answers are not what is held within this telling, as the artfully filtered series is projected most deliciously through the fantastical lens of a very layered Old Hollywood mindset. Even within her fragile disposition and skewed black and white lens, “Landscapers” finds its way to its predetermined conviction, gloriously bathed in a sepia-toned glow that is impossibly clever and intimate. Find your way to this fiercely told and immaculately played unpacking, not just for the brilliant work of Colman and Thewlis, which is most definitely award-worthy, but for the ingenious script and abstract structuring that will stay solidly unfolding inside your cinematically trained minds, as so many of our favorite classic films do. Just like Susan.