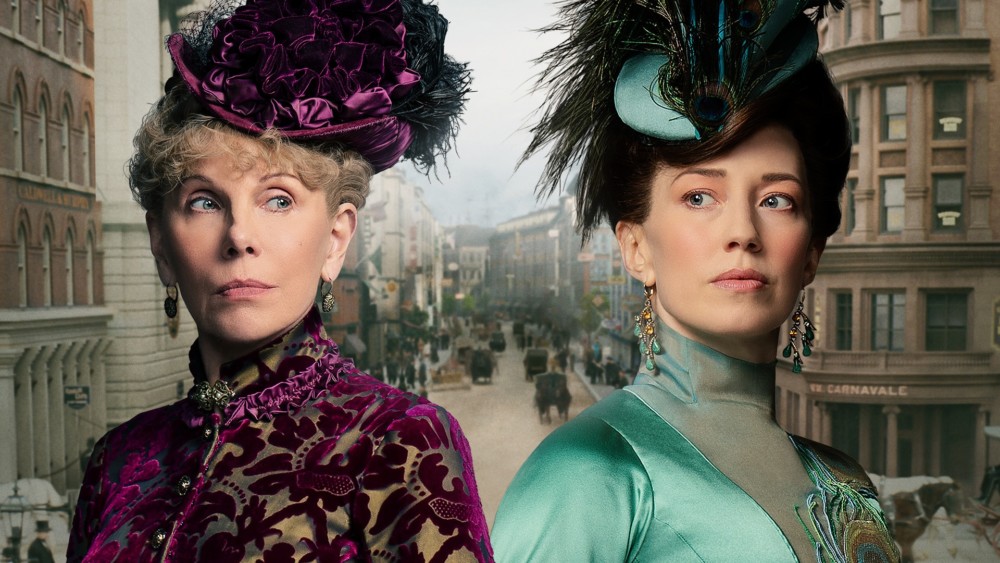 “You can tread too carefully,” are the words spoken most seriously by one of the more mischievous servants of the grand new mansion built on the corner of 61st Street and 5th Avenue, trying with all their might to unleash some tension and drama in the downstairs hallways. While upstairs, the residents are basically following the same rules, just with higher brow ways and means. It is a compelling warning though, one that the producers, director, and Julian Fellowes, the creator of HBO’s new series “The Gilded Age“, took in a bit too seriously. The expensive looking series, which debuted on Crave TV here in Canada on January 24th, is directed with a grand scope and vision by Michael Engler (“Unbreakable Kimmy Schmidt“) and Salli Richardson-Whitfield (“The Wheel of Time“). I just wish the intricacies of the interpersonal interactions were treated with a bit more sharp fun and care, and less melodramatically.

It is, most delightfully, filled to overflowing with plots, issues, complications, and Broadway legends taking on epic parts at every turn, giving it a solid air of event television, worthy of the stunning period visuals the production and cinematographers Vanja Cernjul (“Crazy Rich Asians“) and Manuel Billeter (“Ozark“) have created. It could also have been easily called The Gilded Cage, as the characters all seem trapped in their detailed ancestry and social status, either wanting things to change rapidly, for differing reasons, or for them to remain exactly as they have been for years. Moving forward, for them, the old money of New York City is the scariest thing possible, and stalling the inevitable will be what this series is all about. Hopefully with a bit more connection then what the somewhat stilted first episode delivers.

Watching as the impressive white statuary is delivered to that newly built mansion owned by the wealthy, new-moneyed Russells, is an eye-catching wonder, thanks to the impressive work of the design team led by production designer Bob Shaw (“The Wolf of Wall Street“). Every interior is dripping with extensively researched and orchestrated detailing, particularly the Russell’s, which looks more like a cold and opulant palace than anyone’s idea of home. Standing up tall most regally on that status-grabbing corner, the mansion is one for the future, designed for socializing and receiving the wealthiest of New York City, circa 1882.

Yet, across the street, or should I say battleground, is old money personified, where Agnes Van Rhijn, played extremely well by the fabulous Christine Baranski (“The Good Fight“; Broadway’s The Real Thing), holds societal court in her tight well-gloved fist. She, along with her sister Ada Brook, deviously well crafted by Cynthia Nixon (“Sex and the City“; Broadway’s The Little Foxes) and Agnes’s son, Oscar, portrayed by Blake Ritson (“For Elsie“), will never be stepping through those doors, if Agnes has anything to say about it. Nor will anyone of her tight and closely watched social circle. Oscar is the little seen wild card, at least in that first episode. He’s one to watch, as he has some secrets that we are just given a wee glimpse of. But “The Gilded Cage” is really focused on, much to Agnes’s discomfort, the newly arrived niece, Marian Brook, played tightly and not-so-engagingly by Louisa Jacobson (“Gone Hollywood“). The young generational rebels will be the ones to watch, fighting against a system they no longer believe in. Times, they are a-changing, Agnes, and within their safe and solid old neighborhood, the air sizzles with an unwelcoming aroma.

“The old have been in charge since before the revolution,” Agnes tells us most distinctly, demonstrating that she has no intention of letting that power slip away. Baranski digs most wonderfully into the part, dismissing the Russells without barely lifting her eyes to watch their arrival. She’s electric and on point, along with Nixon, who both give the sisters an edge and complication that works its magic, even when the script barely supplies those needed requirements.

Created by Julian Fellowes, with writing duties shared with Sonja Warfield (“Will & Grace“), the straightforward structuring suggest everything that we could have hoped for from the man who majestically created “Downton Abbey” and the wonderful “Gosford Park“, so it is utterly surprising to find such flatness in the pace and energy. The worlds and words feel appropriate and well placed, but lacking in drive and fire, falling flat on the well carpeted ground when they should be flying across the room. The wicked spark is missing (oh, where are you when we need you, Dame Maggie?), even in the fiery formulation of the aspiring socialite Bertha Russell, played to the nines by Carrie Coon (“Gone Girl“), who along with her wealthy and ruthless railroad tycoon husband, George Russell, portrayed solidly by Morgan Spector (“Boardwalk Empire“), demands to be taken seriously. Even when they should know better.

From watching only the first episode, “The Gilded Age” really needs to find its hook. “Downton Abbey” had its snobbish undercurrent that sizzled with contempt, but it also shined with loving care and solid attachments. The balance worked, especially in the back hallways with the servants. There was drama and conflict, but also an understanding and connectivity, even between the classes that drew us in. “Gosford Park” is also a perfect example of well crafted brittleness mixed with an emotional undercurrent of care. I can’t quite remember how I felt watching the first episode of “Downton Abbey“, but it certainly grabbed hold of my heart as it moved forward. So I’m hoping that “The Gilded Age” finds its subtle way in, but within that first hour and a half, in the words of a good friend who I think nailed it when he wrote me that the first episode was all “about her [Bertha] throwing a party that no one cared about.” And why should we? We couldn’t help but wonder how she didn’t see the end result coming, even before the first invitation was delivered. Curiousity in a house is not enough to overcome the ideals people like Agnes hold tight.