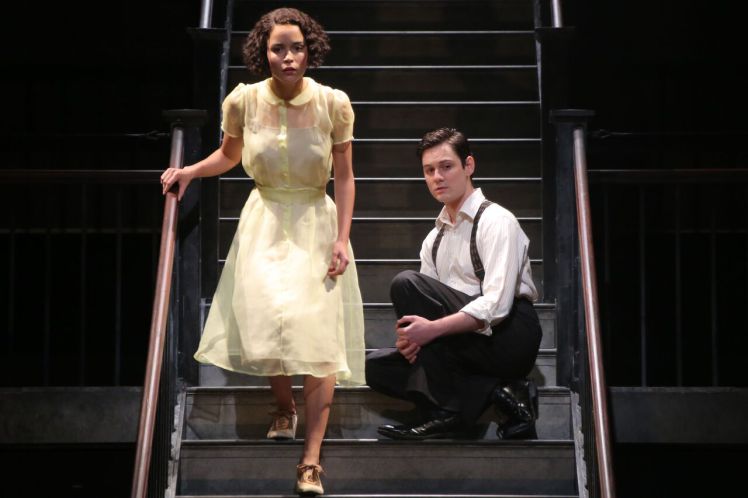 He Brought Her Heart Back In A Box: 45 Minutes of Lyrical Racial Divide

He Brought Her Heart Back In A Box: 45 Minutes of Lyrical Racial Divide

Adrienne Kennedy is a playwright of poetic beauty and roughness. With her first play in over a decade, He Brought Her Heart Back In A Box sings and glides at us through the hazy cloud of a memory play, bringing to mind the haunting and rapturous Tennesse Williams. Lulling us into a hypnotic daze, this play is a racial charged descent into reminiscent dread and drama, floating in on the uncomfortable divide of the 1940’s America. Gorgeously brought forth on the Theatre For A New Audience’s Polonsky Shakespeare Center stage, this complex meditation in racially mixed sexual and love relationships caresses us with smoothly spoken (and sung) contemplations while secretly stabbing us with the hardened reality of racism and brutality of the world surrounding the two beautiful lovers.

Kennedy has been a powerhouse in American theater since the early 1960s, influencing generations of playwrights with her haunting and fragmented memory plays, exploring racism and violence through poetic alienation. Kennedy transcends the normality of plot and character through radical restructuring and experimentation, messing with linear depictions of standard storytelling to get to the emotional core of race, kinship and the violence swirling around this time period in American history and social norms. The unknowns of parentage and the mythology surrounding our fathers and mothers play an intricate role in her semi-autobiographical tales, and in He Brought Her Heart Back In A Box, Kennedy once again succeeds in pulling us deep inside these two characters’ mythology and dousing us with the confusion around the goodness and/or badness of their parents, their town, and all that lies around them.

Layered with lyrically beautiful Southern accents, the mixed race beauty, Kay, played effortlessly by the smooth Juliana Canfield (HBO’s “Succession“) loves and is loved by Chris, the white skinned son of the town’s founding father, played convincingly by Tom Pecinka (2ST’s Torch Song).  The play begins with a glorious exchange of emotional declarations and history on the eve of Chris’s departure to New York City where he hopes to become an actor.  They talk and flirt in the most natural and sweet way, that even with all the references to the world swirling around them, we almost forget that this is a time period when this coupling will only bring trouble to them both. Beyond that moment of engagement, the two speak to us as if we are all conduits that can fly their words of love across the land to the lover who waits desperately for them.  They speak of their personal histories and share tales of their parents trials and tribulations in fragmented snippets of dream-like memories, barely mentioning the obstacles that most obviously lay ahead of them.

It’s hypnotic and gorgeous these readings of love letters from beyond, matched in beauty and form with the exciting visuals created by video designer, Austin Switser (Spoleto Festival’s Onegin), lighting designer, Donald Holder (Lincoln Center’s Oslo), with stunning musical compositions and sound design by Justin Ellington (LCT’s Pipeline) layered on top. The landscape is spectacular, playing out on all the surfaces exposed on Christopher Barreca’s (Broadway’s Rocky) powerful and simplistic set. These languid and relaxed mappings of their world and their town resonate with all the complex beauty of this time of racial conflict and violence, while also being somewhat hard to follow and fully understand. But the weight of the world, and the heaviness of the Georgian town that is projected for us all to see and feel, is thick in the air and impossible to ignore.  This all can, in no way, turn out as hopeful and optimistic as these two lovers make it sound.

Gloriously directed with a slow sauntering Southernness by Evan Yionoulis (Broadway’s The Violet Hour), the brutality of the world never seems too far away.  It is as if, in these feverishly fragmented dreamscapes, the town is watching them from across the room, much like the still macabre mannequin that sits and reads in one corner of the space. This figure that never leaves them alone on stage, is the complicated scion of the town, Chris’s father, Harrison Aherne, the architect of segregation in the town’s structure, but also the man who fathered several children with a number of black mistresses. For all his generosity towards his mixed race offspring, his steadfast control on the racial divides within the town he created casts a heavy and ominous shadow over the lovers, one that they are unable to shake off.  Much like the emotional punch this show delivers in the end.  With the powerful creation on display, He Brought Her Heart Back In A Box is one of the most visually intoxicating productions seen at Theatre For A New Audience, and one that will haunt my memories and dreams for some time to come.