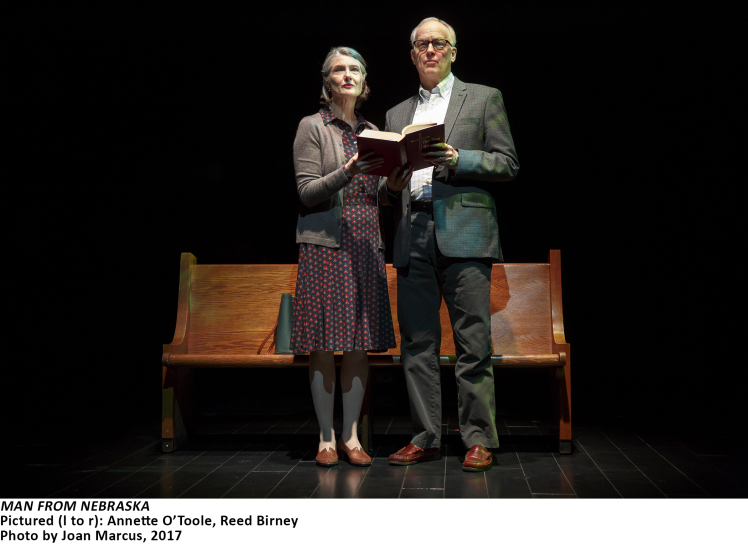 He Said: Man From Nebraska: A Hamster in Search of a Wizard

He Said: Man From Nebraska: A Hamster in Search of a Wizard 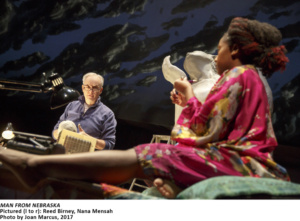 What are the top five things that a hamster does?  Spin in his wheelie thing? Stay in his cage?  Or does he break out? This is essentially the question that playwright, Tracy Letts (August: Osage County) is putting out there for us to contemplate in this quiet meditation of life. The provocative play, Man From Nebraska, which opens tonight at the Second Stage Theater, sets in motion a crisis of faith for his male lead, Ken Carpenter, played by the fearless Tony-winning Reed Birney (The Humans).  The first segment is a stunning bit of quiet story telling. Without that Nebraska small town stillness, the break wouldn’t hit us so hard. We are as confused as his wife, Nancy, played with a perplexed perfection by Annette O’Toole (Southern Comfort-so sad I missed this).  What does one say or do at a time like this when we see our own ‘hamster ‘ flail against his cage walls? 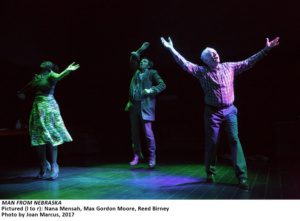 Joining in with the wife’s confusion, is his daughter, Ashley, wonderfully portrayed by the brave Annika Boras (David Cromer’s Our Town at the Barrow Street). She struggles to comprehend what this all means.  The world she lives in is the one she learned to take comfort in. She learned from her parents to find safety and structure inside these walls, and he is casting it aside; escaping it  for something unknown. Her father leaves his wife (temporarily) and his cage, coaxed out into the world by a caring yet flummoxed Reverend Todd (William Ragsdale) to go on a journey of discovery. Will Ken find what he is searching for? A way back ‘home’ in essence, like Dorothy to Kansas, back to a place of peace and understanding. 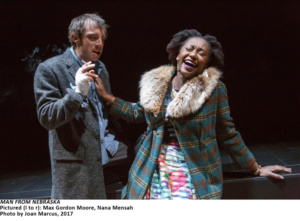 Once outside his small hamster cage, the Man From Nebraska is, not surprisingly, confused as to where to seek his salvation. Stunned by the bright big world and after a turbulent flight, he finds comfort and refuge in the hotel bar. All those he encounters, the wild woman, Pat (Heidi Armbruster), the mad artist, Harry (Max Gordon Moore), and most importantly, the magnificent and insightful Tamyra, (Nana Mensah), the bartender who introduces him to more than just a new cocktail. Unbeknownst to all three, in some wild and glorious ways, they help him down the yellow brick road, in his hope to find an the answer. Is it ‘God’ he hopes to find? A wizard to help him back home? Or just to understand what is behind the wizard or his God? 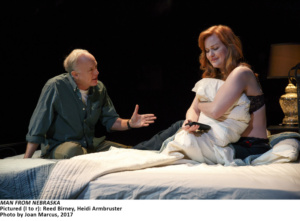 The one piece of this puzzle that doesn’t seem to add anything to this compelling journey is the muddled interactions with Nancy and the world Ken left behind. There are powerful moments of confusion and anger between mother and daughter.  They register on numerous painful planes of emotion; abandonment, deception, victimization to name a few. And there are no easy answers here.  There are also some beautiful quiet moments between Nancy and Ken’s ailing mother, Cammie Carpenter (a wonderful Kathleen Peirce, also from Cromer’s Our Town) causing us to recognize Nancy’s isolation. But the interactions involving the Reverend’s father, Bud Todd (Tom Bloom) and Nancy don’t seem to expand on anything besides Nancy’s already finely detailed abandonment and despondency. It’s obvious that both Nancy and Ken believe and value their marriage more than God itself, but I’m not sure we needed this added test to know this about Nancy. Her battle with her angry daughter set that stage earlier on.  Nancy’s role in his quest is something that never gets fully incorporated enough to feel satisfying or as detailed.

Director David Cromer (The Band’s Visit, The Effect) does a superlative job slowly sussing out the details and the layers of Ken’s life, loves, and his lost soul that set him out on this journey of discovery, but not such a good job with Nancy. The space is a constant whirlwind of places and pieces making up the landscape of his journey (spectacularly detailed and creative work from scenic designer: Takeshi Kata; costume designer: Sarah Laux; lighting designer: Keith Parham) His unhappiness and disillusionment is the tornado in his soul that throws himself out of his sweet Kansas, I mean, Nebraskan home (lovingly echoed in the original music and sound design: Daniel Kluger). We hold our breath at the end to discover if and what he discovers about himself and the heavenly powers that be. I would have enjoyed a greater sense of clarity and understanding, and most likely Ken would as well, but the last few minutes are tense and completely engaging. Is there no place like home? Ken is definitely trying to find that out.
For more go to frontmezzjunkies.com
Related Items2STNYCAnnette O’TooleAnnika BorasDavid CromerHeidi ArmbrusterKathleen PeirceMan From NebraskaMax Gordon MooreNana MensahNewReed BirneyRossSecond StageTakeshi KataTom BloomTracey LettsWilliam Ragsdale
Off Broadway

Suzanna BowlingOctober 19, 2020
Read More
Scroll for more
Tap
Good Samaritans: Performance Art Versus Theater, Or Are They One and the Same?
Glenn Close Imitated Hillary Clinton At The 2016 Tony Awards