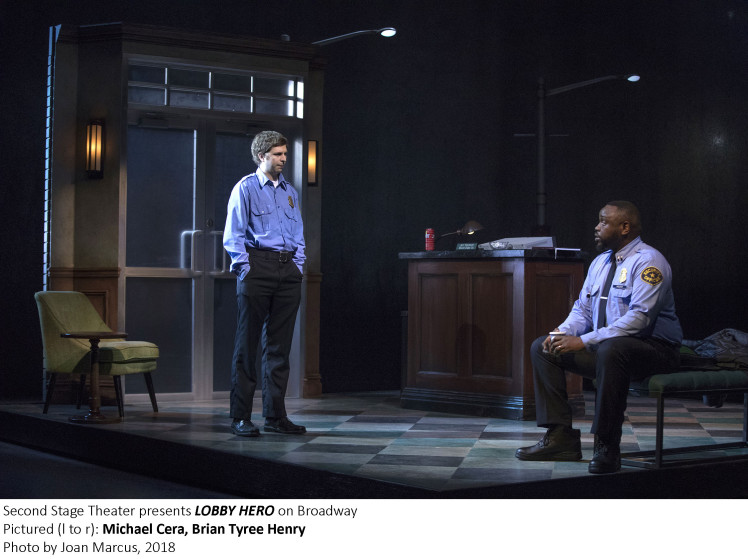 The four intriguing characters that make up the square edges in Kenneth Lonergan’s  Lobby Hero, the revival that ushers Second Stage Theater on to the Broadway scene, find themselves caught in a quagmire of complications as they struggle and get tied up into ever tightening knots of loyalty and emotions during the midnight shift at an upscale Manhattan apartment complex lobby. We know these kind of simple but complex souls, where heroic moments are not so clear, but layered with regrets and bad choices. These knots are the very fabric of a Lonergan drama, much like his Oscar nominated film, ‘You Can Count on Me’ (2000), and the Academy Award winner for Best Original Screenplay, ‘Manchester by the Sea‘(2016).  The four that stand make up the corners of the magnificently designed square lobby, rotating around one another as flawlessly as David Rockwell’s carousel set does around the actions of this crew of working class security guards and police officers. They are so solidly present in this drama, that first premiered Off-Broadway in 2001 at Playwrights Horizons, subsequently nominated for  a Drama Desk, Outer Critics Circle, and Olivier Award for Best Play during its West End run, that we are thoroughly transfixed by the authentic and constant twisting of the web that is slowly weaved.

Director Trip Cullman (Broadway’s Six Degrees of Separation, 2ST’s The Layover) keeps the action of these four pulsing forward with an ease and an urgency that keeps our focus tuned in and our blood flowing.  There are no moments of boredom or lethargy that one might expect during the graveyard shift of a lobby security guard, just well-played and orchestrated interactions all floating around the issues of morality and ethics. Michael Cera, who was so brilliant in Lonergan’s Broadway play, This Is Our Youth, is the rambling and insecure doorman, wait, I’m sorry, I mean, ‘security guard’, Jeff who holds that title very dear to his persona, sits at the center of this revolve, trying ‘sorta’ hard to pull his life together after, what he calls, some ‘bad luck’ in the navy. His body language, with hands shoved forcibly down inside his polyester uniform pant pockets, screams of a lost soul who wants to believe in salvation, but is far too impulsive, sarcastic, and lazy, all at the same time, to really do the work to make solid gains in his life. He’s like a smart stoner without the stone. With strong inspirational yet somehow confrontational support from his boss, the solid Captain William, played as perfectly as one could imagine by Brian Tyree Henry (The Book of Mormons), Jeff states he is being lifted up, when he’s not being torn down, by the motivational encouragement coming at him from his boss. It’s a complicated mess to watch, as William is a good man, but doesn’t seem aware of the put downs and hardness thrown at regular intervals at his subordinate.  But the twist of Lobby Hero and the conundrum of the play that enters casually into that square lobby is on the back of Captain William, who is the first to broach the subject of “what would you do if…hypothetically speaking?“. That question hangs over the tiled floor, and slowly crystalizes into the larger one that asked, who will be the man who stands on the higher ground at the end of the shift; who will be the hero of the moment and the lobby who finally does the right thing for the right reason? Or will there, in the end, be one soul who can securely claim that title? And who will be left trapped and wiggling to death in the web of their own creation?

Balancing out the dynamics of these two are a pair of cops that routinely show up in that same lobby each night. Chris Evans, using every imaginary quasi-connection to his ‘Captain America‘ of the movies, makes an impressive Broadway debut playing the overly confident policeman-narcissist, Bill, who likes to swing by the building every night for an on-duty personal visit to a pretty and obliging female up on the 22nd floor. He won’t sign in, naturally ignoring the request from the lowly security guard, as Evans wondrously inhabits the beautifully arrogant and cocky persona of a super-cop basking in his powerful magnetism and manliness. Bill is also all too aware of the hold he has over his police partner, Dawn, and the belittling nervousness he can elicit from Jeff just by standing up close to him, exuding from his very core the feeling that he has every right and privilege to do so. The #MeToo movement has yet to creep up on him, but it’s only a matter of time, as the way he engages with all, especially with his buddy William, is both icky and charming, pulling us in seductively while at the same time, we see the knot of complications slowly tighten on them all.

Waiting patiently down in the lobby when Bill is upstairs doing his thing, is the rookie police officer and far too green partner, Dawn, played marvelously by Bel Powley (Broadway’s Arcadia). She is totally smitten by her Human Torch of a partner, believing in his boastful platitudes until the obvious is pointed out to her by the overzealous Jeff. Jeff, you see, is awkwardly smitten by Dawn and doesn’t seem able to stop the flood gates of words that constantly come rattling out from his nervous mouth. Their growing chemistry and dynamic is brilliantly caustic, cute, and electric, as she battles herself for what is right and wrong in any and all situations, trying so hard to become the cop she wants to be and the person that does that right thing in the end, even if it means throwing someone under the bus.

Lust, power, and attraction are played out impulsively and organically by the brilliant dialogue of Lonergan, as all four bounce off each other in ways that is both surprising and thrilling.  Lobby Hero is strangely dynamic, hilarious, and crisply fascinating with a strong moral conflict at its center, spinning everyone around without throwing anyone off the turntable with too much force. I’m not sure what the overall scheme is in Lonergan’s heart regarding these four, but it’s obvious he loves and cares about them all, hoping they find solutions and optimism for what lays ahead. One thing is clear though.  What lies ahead for these actors, and for the production as a whole, is numerous thumbs up and accolades coming their way, as we never get sick of watching them fight to stay upright.  And Chris Evans, as he states about himself at one point, is “the best cop I ever saw”, or at least he’s pretty darn close, but not due to his complicated morality.