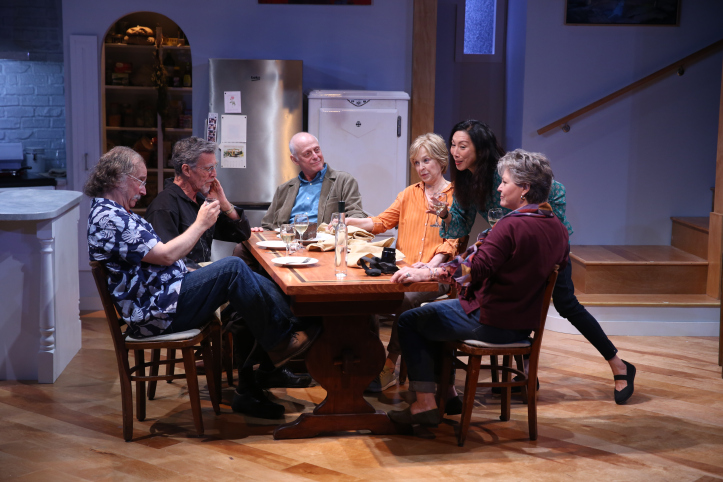 From the list of ingredients, Fern Hill, written with a kind charm by Michael Tucker (The M Spot, ‘L.A. Law‘), seems like a sure thing. The new play flows fairly smoothly, with each interaction ladled in with care, and the actors each spooning in their input with deliberate focus, all doing there part to bring this play to a full boil. For the first half, I sat back enjoying the precision of these professionals constructing formulations for these couples “in their golden years” gathering together to celebrate three milestone birthdays. But as the play ticks forward, I became more and more perplexed and somewhat confused by the interactions. Why, I wondered, wasn’t this tale of a gaggle of older good friends, made up of three seemingly secure straight couples, connecting on a deeper more authentic level? John Glover (Broadway’s Saint Joan, Love! Valour! Compassion!) as an artist named Vincent breathes life and humor into every word and shuffling step taken. Ellen Parker (Broadway’s Equus, Public’s Plenty) as his wife, Darla, delivers a captivating flavor and crisp engagement, while Mark Linn-Baker (Signature’s Good for Otto, Broadway’s On the 20th Century) as Billy the aging rock and roller, and his wife, Michiko, portrayed by Jodi Long (Broadway’s Flower Drum Song, “Beginners“), work their magic like pro chefs bringing spice and fun to the sauce (especially when Linn-Baker delivers a clam recipe that makes your mouth water). These two couples are exceptional in their portraits, but unfortunately, they are not the core ingredients. They are simply the side dishes at this friendly communal dinner party.  The main course is where the disconnection and flavor separation is occurring.

As directed with a slow somewhat stilted pace by Nadia Tass (Signature DC’s Masterpieces), the couple at the center of the table, Sunny, portrayed purposefully by Jill Eikenberry (Broadway’s Moonchildren, ‘L.A. Law‘), and Jer, played at an uncomfortable distance by Mark Blum (PH’s Rancho Viejo), never really find a real and intricate connection to the marital betrayal at the core. It feels forced upon, and not fully explored and installed in the dish. A discussion revolving around communal living and the conflict embedded within just adds another layer of interactions that feel convoluted and forced; a construct to push a plot point forward rather than feeling organic to the dish.

The play as a whole stutters along from vignette to vignette on a stagy set designed by Jessica Parks (59E59’s Butler), with defined costuming by Patricia E. Doherty (Public’s Southern Comfort: The Musical), overly dramatic lighting by Kate McGee (Public’s Ain’t No Mo’), and a fine sound design by Kenneth Goodwin (Assistant on Broadway’s The Parisian Woman). All mixed together in one big steamer pot, the dynamics and actions taken feel cute but superficially not required for the meal to be made.  With moments like the slow jazz dancing of the ladies, the overly long (but sweet) scene set-ups, and the discussion of porn, to name a few, are greeted by the audience at 59E59 Theaters with laughter and gentle kindness, but do little to move the dinner forward. A sharp knife cut to the meat would make a better one act meal, then these two laborious courses served slowly over two hours.

Even when the bonds of loyalty and the discussion of sexual truths are being revealed, a layer of inauthentic distance remains.  Sunny and Jer, and their conflict are moved around like sautéed onions, becoming more opaque rather than defined, tasty, and powerful. The shifts in tone don’t register and the flavor of the discontent never really feels fully formed nor resolved in the end. It’s unsatisfying when finally served, unfinished and in need of some more work. Maybe a bit more salt or some other spice is required to enliven the piece, and a faster tighter pace. When the whole party dissolves at the end, the meal eaten leaves us hungry for something deeper and more delicious, especially given all those wonderful ingredients, like Glover (by far the best thing), Linn-Baker, and Parker, to be worked with.

All is not lost though. Just don’t forget to try to make that fantastically delivered Spaghetti Vongole Da Michele described and listed. It sounds like it will curl your toes when created, even if, like me, you don’t really eat clams.

Suzanna BowlingSeptember 11, 2022
Read More
Scroll for more
Tap
Luisa Omielan Off Kilter and Off Base
American Moor A Vision of Othello