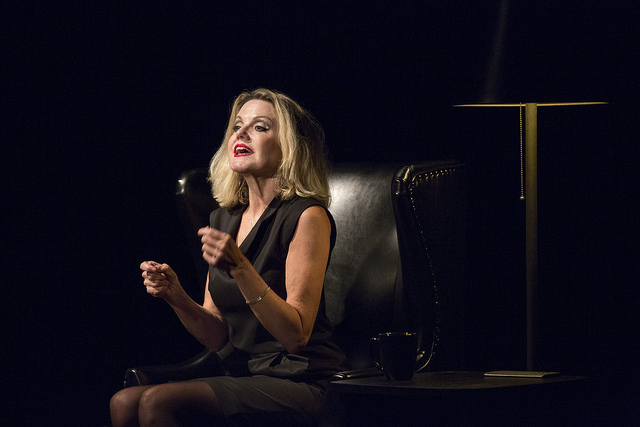 He Says: A Bloody Good Slice of Squeamish For A One Woman Show

He Says: A Bloody Good Slice of Squeamish For A One Woman Show 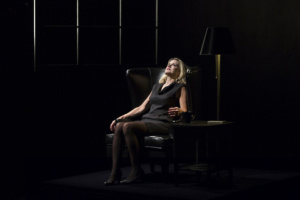 What is it that makes you Squeamish? Is it the bloody red hand-print on the poster for this new play written and directed by Aaron Mark? It certainly is arresting, eye-catching, and provocative, but doesn’t exactly make me Squeamish. The gory image does hit you when first arriving at the Beckett Theatre at Off-Broadway’s Theatre Row. And on the weekend before Halloween, it resonates in a fun and thrilling kind of way, like the thrill of a Haunted House ride at an amusement park. But what makes me Squeamish is not the sight of blood, but the idea of skin being cut, sliced, or punctuated. I’m not sure why, but I’ve always had a little bit of a phobia about sharp knives and needles for as long as I can remember. My mother even bought me the best kitchen present ever, when she found a whole knife set with individual hard plastic covers that totally enclosed and snapped on over the cutting edge. These I could have in my kitchen drawer. The others, the ones that just lay around unsheathed were totally unacceptable.

The idea of blood doesn’t cause one moment of panic. So I wasn’t worried, because this show, as the poster suggests, is a bloody “psychological horror” play about what happens when an Upper West Side psychoanalyst jumps off her medications into the South Plains of hometown Texas and finds herself pharmalogically defenseless at the funeral of her nephew. If you had asked me what Squeamish was about before seeing it, I would have been tongue tied (as I like to be before a night at the theater). Other then the bloody handprint, I really had no clue. And upon entering the theatre and seeing the staging laid out before me, I still was in the dark. Designed by Sarah Johnston (scenic & lighting), the set is simple and funereal, with a big comfortable looking arm chair dead center stage, and a side table and a lamp to the right. Behind this elevated setup is a large framework of what can only be assumed to be a gothic style window. Everything is dark and quiet looking, lit very elegantly and singularly with precision and attention to atmospheric detail. We are given the same pre show requests; turn off your cell phones, no re-entry, and no texting etc, but with an additional caveat, that the show is very dark and very quiet, so any light or sound will be much more disturbing to others than normal. And they are so right (although it certainly didn’t stop someone up front from checking his or her cell phone in the middle of the one-act show). It is quiet, very dark, and pretty disturbing. And yes, it succeeds in making me Squeamish.
The one woman horror show, directed cleanly and precisely by Playwright, Mark (Labyrinth’s Empanada Loca), is very well served by the two-time Tony nominated actress, Alison Fraser (Public’s First Daughter). From the moment of her quick entrance, her presence and her performance draws us into her reality completely. She’s here to tell her story, and curled up in that chair, she is hypnotic. Her vocal affectations and delivery is enticing and engaging, and even though the ending is pretty predictable (I guessed pretty early on, while my companion figured it all out midway), and there are moments when the story drags a bit, together, Fraser and Mark still manage to thrill us. They hit my Squeamish bone pretty dead on, slicing their way into my own personal nightmare. This All For One production is not a horror show in the traditional sense, but it is a bloody good time. So go for it, get Squeamish.
For more go to frontmezzjunkies.com
Related ItemsAaron MarkAlison FraserAll For One ProductionsNewRossSarah JohnstonSqueamishTheatre Row
Off Broadway