He Says: A Christmas Carol Haunts With Cookies and a Feast Delivered from the Heavens 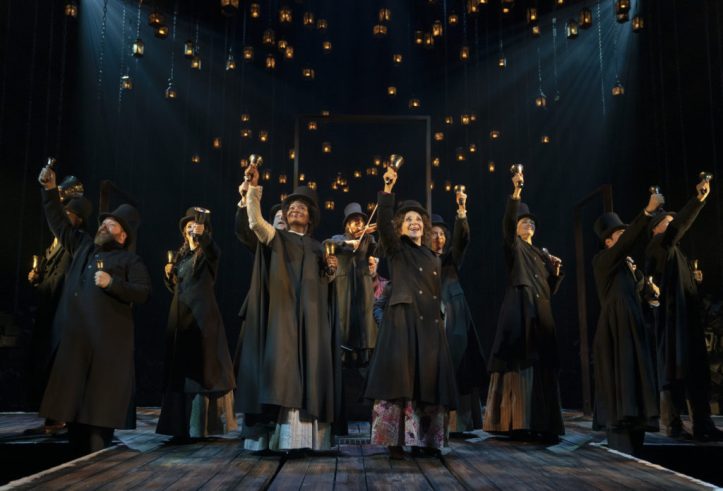 He Says: A Christmas Carol Haunts With Cookies and a Feast Delivered from the Heavens

So let the bells chime and the lanterns be lit. They hang all about, bringing warmth and joy to the crowd. It is Christmas time on old Broadway, courtesy of a lovely Old Vic production now playing at the Lyceum Theatre. This version of A Christmas Carol brings treats and cookies all the way over from across the pond. It’s sweetly tossed, gifting smiles to the crowds of spectators, particularly when we are graced with the glorious presence of Andrea Martin (Broadway’s Pippin) and LaChanze (Broadway’s Summer) wandering through the aisles pre-show smiling and engaged, enjoying being the bearers of these yummy baked goods (although mass produced and giving the audience a whole lot of packaging to make crinkly noises throughout the two act play with music).

The ghost story of Christmas cheer and a reminder to love and celebrate at this time of year as adapted most inventively by Jack Thorne (ATC’s Sunday), mostly hits its holiday stride. Even though not the quickest or most focused one, it gives a new incantation to the secrets hidden in the floor boards of the theatrical. It is kindly directed with a wise gaze to the simplicity of the meaning by Matthew Warchus (Broadway’s Groundhog Day) who guides the piece forward through a night of three visitations with casual cheer. It’s a charming iconic tale to remind us of the joy in giving rather than receiving, and to step back from the consumerism of the holiday. It exists to reframe our holiday celebrations to be more thankful for the blessings that we have at our fingertips, if we are wide awake enough to look.

Campbell Scott (Broadway’s Noises Off) stars as Ebenezer Scrooge, the miser at the middle of this tale of haunting. He oddly isn’t given a bed or a chair to sit or lay down on (which I think is a glaring omission) but the esthetic is bare and minimal, at least in the middle of the four door center of the stage. With well formulated set and costumes designed by Rob Howell (Royal Court/Broadway’s The Ferryman), lighting gracefully orchestrated by Hugh Vanstone (Broadway’s The Height of the Storm) and sound delicately designed by Simon Baker (OldVic/Public/Broadway’s Girl From the North Country), the story, even with the piles at the side and the thousands of lanterns hanging overhead, is stripped down to the minimum. In that sparseness, there is beauty and charm, especially in the visions of the past, brought to us by the phenomenal cockeyed Martin as the Ghost of Christmas Past, and the Jamaican-tinged LaChanze at the Ghost of Christmas Present. It’s engaging a solid emotionally, but somewhere in the multi-figured Future, the pleasure seeking inventiveness gets convoluted.

But let’s be honest, it’s a tale we all love, and with the singing of 12 of the most cherished Christmas carols, including “Joy to the World,” “Silent Night,” and “It Came Upon the Midnight Clear”, thanks to composer/orchestrator/arranger Christopher Nightingale (West End/Broadway’s Matilda), music coordinator Howard Joines (Broadway’s Beetlejuice), and music director Michael Gacetta (Broadway’s King Kong), the feast flown in is a joy, and the meaning of Christmas isn’t lost on Ebenezer, nor any of us. The tale of redemption, brimming with Christmas spirit, is by no means perfect, nor is it without holes and twists that might make Charles Dickens squirm in his seat. But charity and love is a much needed commodity these days, and this version of A Christmas Carol is musically overflowing with goodness. And these cookies aren’t too bad either (just don’t open the packages while the ghost story is in full haunting mode. It’s disruptive).