He Says: A Global Statement About All My Sons Stumbles 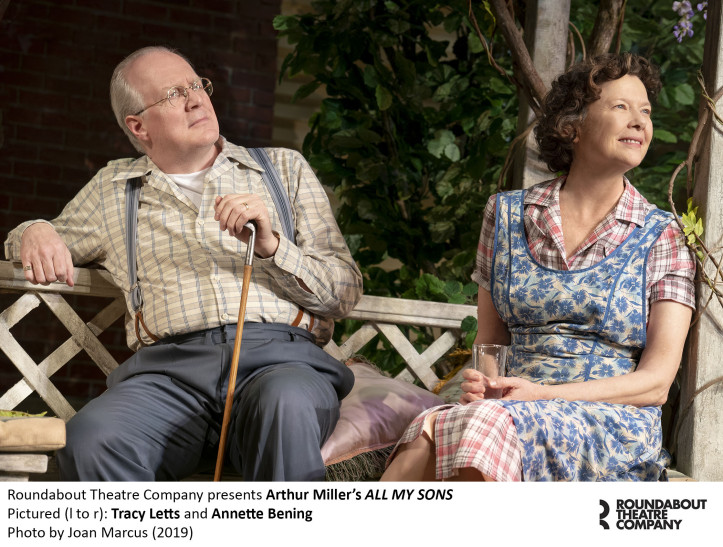 He Says: A Global Statement About All My Sons Stumbles

It’s global, this inclusive idea of All My Sons, parachuted down into the simple backyard of an average American family after the war, courtesy of the fine video & projection designs by Jeff Sugg (Broadway’s Sweat) during the opening minutes. The reality of that wreckage, drenched in the promise of the “American Dream”, is stated with a clarity that sends chills down our collective spines. Like the business men of Salesman, Joe Keller, played with a thinly veiled passivity by the phenomenal Tracy Letts (Broadway’s Who’s Afraid of Virginia Woolf) in Roundabout Theatre‘s revival at the American Airlines Theatre, has to find a way to comprehend the collision at the core of this epic play, and make amends with himself for losing his morality in the conflict between love and deceit, comfort and complicity, family and country (as stated by Todd Haimes, Artistic Director/CEO of Roundabout in the program notes). And a surviving son has to grapple with the destruction of his truth and his strongly held belief of honor within, struggling to survive a battlefield destroyed by the complicity of power and wealth. The play’s drama is intricate and delicately entangled in the interactions and faith inside family, friends, and neighbors, and Miller always has found his timeless way into that conflict with urgency, clarity, and precise ease.

All My Sons, a 1947 play by Arthur Miller opened on Broadway at the Coronet Theatre on January 29, 1947 and ran for 328 performances. It was directed by Elia Kazan (to whom it is dedicated) and won the New York Drama Critics’ Circle Award. Winning both the Tony Award for Best Author and the Tony Award for Best Direction of a Play, the now classic play starred Ed Begley, Beth Miller, Arthur Kennedy, and Karl Malden. What an storm that would have been to witness.

This time around, the solidly realistic Ohio backyard years after World War II designed to exacting detail by Douglas W. Schmidt (Broadway’s The Front Page), with classic shade and sun lighting by Natasha Katz (Broadway’s Frozen), is a place where a tall tale of deception is having a difficult time staying hidden. Just look into the hollowed out eyes of Kate Keller, played with shell shocked rigidity by Annette Bening (2ST’s Spoils of War). She moves around that yard like a tense animal, edging on the side of the over-alertness of a damaged heroine. She struggles to engage, even when she deals with her loving and thoughtful son, Chris, played to upright perfection by the captivating Benjamin Walker (Broadway’s American Psycho). This reimagining lives and breathes in a way that is nothing like the Broadway revival I saw back in 2008 at the Gerald Schoenfeld Theatre starring John Lithgow, Dianne Wiest, Patrick Wilson, and Katie Holmes. That production carried with it a symbolic edge and metaphoric grandeur that burrowed under my skin, leaving me uncomfortable and itchy.

This production stays painting itself on the surface like bug repellent. Their All My Sons is trying to see it all as humanly as possible, but slips on the wet grass, out from under its own steady feet. They are suggesting a storm is approaching, as fierce as the one that broke the war hero son’s tree in the middle of the night, but when it finally does arrive, lashing at its windows, the house stands fairly still and unaffected. Joe’s backbone snaps, in a way, in the final minutes, but Bening’s Kate barely flinches against the onslaught, seemingly able to withstand the gale force winds, as her insides are already torn to shreds and shattered beyond repair.

“Larry is not coming back“, his brother states, with Walker delivering the goods with a force and fever that catches, hoping to move past the ominous veil of PTSD that descended on that house so many years ago. His performance is Tony worthy, turning and flailing against the shrieks of the wind. His mother can’t give up the fight and the faith though, as most of Miller’s mothers are want to do, for many more reasons than first stated to her son. In Bening’s capable hands, Kate registers the battle, but loses out on the subtle dynamics, playing someone so tightly wound that no one can get inside.  Her character only comes alive when pushed to confront the allegations or to pretend to guests that all is perfectly good between them all.  As long as she keeps her pilot son, Larry, alive, declared missing many many years ago in a wartime plane crash, she can withstand almost anything, somewhat. But when Ann Deever, played with definition by Francesca Carpanini (MTC’s The Little Foxes) arrives at the request of Larry’s brother, Chris, the winds change direction for Kate. She tries to pretend all is right with the world, and that ultimately, Ann will always be Larry’s girl, forever waiting for his return, symbolically standing at Kate’s side in hope and loyalty.

But Annie’s arrival has a different purpose, one that won’t sit well with Kate. She has come back to her hometown neighborhood, even though it has many a bad wound directly associated with Chris’s family, particularly his father, Joe. Joe was in business during the war with Ann’s father, a man scorned and shamed out of town, who now sits in jail to this day for a business transaction that Joe was cleared of,. But she’s not back home to confront the past, she’s there to begin a new chapter with Larry’s brother, Chris, and together find happiness together as a way to move forward, even if Kate can’t see that clearly. Miller has other plans for this sunny day particularly for these two families though, throwing down the gauntlet of mistrust and a basketful of questions to wrangle and tie down. The past is blowing back into town, bringing to the forefront a conflict that involves the manufacturing of defective airplane parts which wound up killing 21 pilots on missions over Australia. On that beautiful summer day as the winds of time ramp up, that catastrophe is going to ricochet into the present in the form of a long-withheld letter, interlocked in the formidable hands of Ann’s brother George, played intensely and wildly by Hampton Flucker (Cherry Lane’s Esai’s Table). With the disconcerting announcement that he is on his way over after a surprising meeting in the prison with his father, a man both children have vilified and ignored, the tension in that house is reborn. The storm winds pick up, threatening to take down all that stand up to the power of the past. His awaited entrance is fiery but faulty, flipping back and forth from demanding restitution to wanting renewal. The scene stumbles inauthentically, but a slip of a wife’s tongue snaps it back into place. Maybe this time, a good homemade juice can’t right all wrongs, or make the past fade away into the flowering trees.

Director Jack O’Brien (LCT’s The Hard Problem) has planted this stormy day on the most idyllic of ones, radiating out the perception of perfection with dry rot growing underneath unseen to the neighbor’s eyes. Those folks, all played solidly by a cast of professionals, wander in and out of that family’s backyard as if they were the classical grandmother and grandfather of the street, but what we find below the surface is more morally complex and convoluted. With the sound of war leading us in and out, designed with a focused ear by John Gromada (Broadway’s Torch Song), George’s arrival is going to unleash the questioning wind that will strip away the sides, leaving the rot exposed for all to see. Ideals are struck down with lightening, and the solid family value tree is uprooted and turned on its side.  The production stumbles, failing to live up to the tragedy that swirls around the home, leaving familial destruction that has little impact on those baring witness to the events. I was as unflinching as Kate, when I wanted to be as devastated as Chris, but maybe this morality tale of commerce and war seems less a storm, then a gusty breeze, when we look it to what is going on in our current dry rot corrupted government. The Keller and Deever conflict pales in comparison, making it easier to withstand Miller’s ideas and be unfazed with ease.