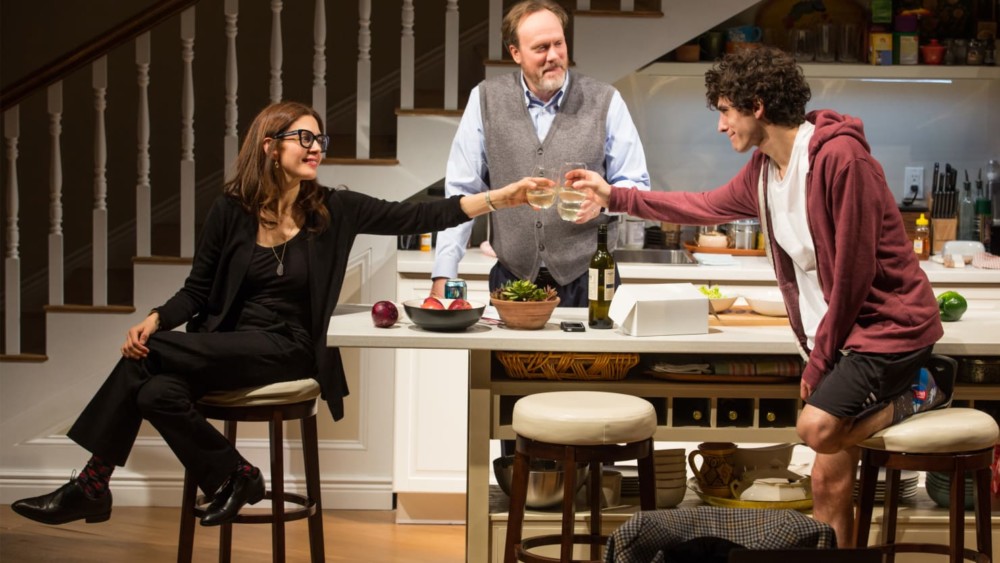 Tip toeing into the messy terrain of race and racism, Joshua Harmon (Roundabout’s Bad Jews, Significant Other) bravely and purposefully digs in to the world of a private school admission director’s life and family, played heroically by the always fascinating Jessica Hecht (Broadway’s The Price). Revolving around the ideas of racism and diversity with a steady hand and a compelling angle, Admissions, the new play directed with a clarity and compassion for friendships and family by Daniel Aukin (Broadway’s Fool for Love) doesn’t let anyone get away with anything, nor does he allow anyone to take the fall for the cause.  There are no good guys, and no bad, because at the heart of this piece is a dialogue that is so difficult to navigate with complete conviction, that the absurdity of the argument, as deployed like a bomb by the magnificent Ben Edelman (Broadway/Roundabout’s Significant Other), as the high school student and son Charlie Luther Mason, is as convoluted as the concept.

Hecht’s character, Sherri Rosen-Mason, Admissions director at an elite private high school prides herself on her devotion to making the school more and more diverse with every school year.  The admissions catalogue, seen as the picture postcard of the school and its attempt to integrate and diversify beyond its once narrow scope, is the focus of her clear and concise discussion with Roberta, played with exquisite uniqueness by Ann McDonough (LCT’s Abe Lincoln in Illinois).  The photos within the pages must reflect the goal she is trying to achieve, and within that dialogue we see every trap and problematic interpretation that can exist in this type of interaction.

Oddly enough, or perfectly cosmically aligned, I read a piece on that lovely social media site, Facebook (that I hope kept my personal details to itself) written by Michael Harriot titled, “#NotRacists Be Like: The Top 10 Phrases Used by People Who Claim They Are Not Racist“.  At the time, just hours before braving the snow storm that assaulted the Eastern Seaboard to see this play at the Mitzi E. Newhouse – Lincoln Center Theater, I had no idea that it would almost be referenced within that first scene over and over again. Harriot writes, “racism isn’t always intentional. Sometimes it is a byproduct of privilege, sometimes it is a deflection, and sometimes it is caused by the vapid, shallow inability to care about or understand anything that they don’t agree with because they are the majority.” The main premise of the article is to dissect those top ten phrases and examine just why they are so problematic. To hear them being used, almost word for word within the first five minutes of the play gives pause to register just how prevalent this dilemma is, even amongst those that feel they are far too liberal and caring to ever be thought of as a racist. “I don’t look at race!” is a line in the article, #8 I believe, but it is also spoken by Roberta in defense of herself within that first telling scene. Here, in Admissions is that exact quagmire, where each and every one falls and stumbles and gets called out for the thoughts and comments that are made, even when the personal perceived belief is to be anything but. This is an examination of white privilege, white power, and the anxiety and guilt associated with trying and failing without reducing any of these characters to a basic stereotype of good or evil.

Beautifully played and orchestrated on a far too wide and open set by Riccardo Hernandez (Broadway’s Indecent), with solid costumes by Toni-Leslie James (Broadway’s Come From Away), lighting by Mark Barton (Public’s Hamlet), and sound by Ryan Rumery (MCC’s End of Longing), the task before this family of three, Sheri and her husband Bill Mason, played with a well-intentioned heavy hand by Andrew Garman (PH’s The Christians), who just happens to also run this very same school where their son is about to graduate from, and hopefully, if Charlie gets his eternal wish, to go off to Yale the following school year. But things don’t go as planned or as hoped, for anyone in this family.  Words are said out of frustration and anger, with truths peppered in with the difficult land mines of conceptualizations, by everyone present.  This is one of those plays where you keep agreeing with the person speaking, only until the next person does, and then a readjustment and recalibration takes place, and we find ourselves questioning our previous agreement.

The writing is an expertly coordinated attack on each and everyone on stage, and these actors take those hits magnificently.  “You seem fixated on Race!“, and Harmon is rightly so, because as Harriot also states about his #10 phrase, “the only way America will ever cure the cancer of white supremacy is by talking about it and treating it as if it were a disease.” The level of interaction between these five professionals is of the highest caliber and the punches to the gut and the explosions of mines being stepped on resonate on so many different levels that the piece is sometimes hard to hold tight, but it is in Hecht’s later interaction with friend and fellow mother, Ginnie Peters, played with a complicated aggressiveness and sweet charm by Sally Murphy (Broadway’s August: Osage County) that the true rocky road for the ideals and contradictions of liberal White America detonates. No one is going to get out of this mess without stepping on a mine somewhere, here or there, and although no one is obliterated in any one blast, damage and cartilage from the explosions will be lodged in to their skin and bones for a long time going forward.