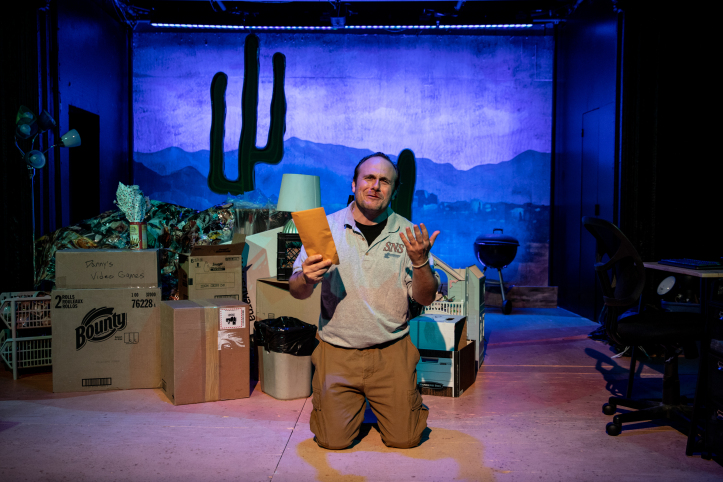 When a man loves a woman. What exactly is he capable of doing? Or failing and flailing to do? That’s the overarching statement and question that flies overhead during this particularly stormy Monsoon Season as written by the sharp Lizzie Vieh (The Loneliest Number). Birds are everywhere, literally and metaphorically, flying with a kamikaze-like attitude into windows and backyards, threatening and warning of the coming of the rains. With classic country music and cacti a-blazing in the background, courtesy of the eclectic set design by You-Shin Chen (Ars Nova’s Mrs. Murray’s Menagerie), the haphazard ramshackle quality ushers in a similar dead-end vibe that permeated the stale air of 2ST’s Linda Vista, for pretty much the same reason. It’s a better wittier rendition of a man’s utter failure in marriage, told with a warped eye for destruction, and one that packs a two sided hammer punch that buzzes with Adderall glee.

The man before us in the first segment is Danny, a sad pathetic IT guy, played with wide-eyed exhaustion by the engaging Richard Thieriot (2ST’s Mary Page Marlowe), living sleepless is an unpacked clutter of boxes, kicked down and out by his wife Julia, who we will meet up with later. His smile is of the torn down tense variety, that registers pain inside the twitch and agony underneath the lopsided grin. His well paced monologue pulls us inside his torturous Peaches strip club dilemma, and then fractures us away when he starts down some inappropriately angry and zoned out pathways. As directed with sharpness by Kristin McCarthy Parker (59E59’s Bears), this problematic man child is lost, running and stumbling towards nothingness with scissors in his hands. It’s a recipe for disaster, we all see it, as he hides in his shell “like a little bitch“, making bad choices, one after the other, snip snip snipping himself with castanet fury out of his own life into a lifeless puddle in the backyard.

His full throttled and bloody fall into the rushing waters of Monsoon Season surprisingly engages, even as it becomes more and more deliriously uncomfortable and stained, just like his sad IT shirt. Within the smart and solid costume choices by Haydee Zelideth (Public’s Mojada), we somehow feel for this sad sack, reluctantly, and just as the connection is somewhat complete, a sharp and intensely fractured burst of light, designed by the talented Sarah Johnston (AFO’s Squeamish) with perfectly attuned sound design by Emma Wilk (Off-Broadway’s A Clockwork Orange), shoves Danny boy out into the dark night, replacing him by the hard as nails Julia, well played by the smart Therese Plaehn (National tour of The Humans). “People need to like me” she says, as we struggle to do just that.  She’s self-involved and selfish, channeling all that is wrong with America’s instant gratification generation, telling us that she’s wasted her “hot years” on her devoted husband, Danny.  Their child seems less important to her than a kitten, or a hermit crab, and her attempt to rectify her reflection in the mirror is as messy as her hot guy infested teenage girl thoughts. It’s highly captivating, her performance, daring us to find the human behind the artificial video tutorials and superficial rants. Cunning in her collapse, Plaehn does her duty forcing us to look down the troubled YouTube into her sad needy world as she starts out her story in the same place that Danny did some 30 minutes prior.

It’s a startling construct, that feels at first like a fun parlor trick, giving us her side of the phone conversations and arguments that we already watched lead Danny to his destruction. There’s a slight problem with the flip-side replay. The slickness of style doesn’t exactly pull us in as emotionally as we just experienced with Danny.Her personal descent into jittery madness and mental breakdown is packed with power but lacks that the same compassion. Maybe we can’t, cause we have already seen the pain she has caused so its difficult to get behind her need.  Plaehn does her best to force us to look, especially as her live streaming fractures into a truly wonderful demented bird land paranoia (yes, you read that right) that feeds off the shattered pill popping madness of the distraught.  It’s quite the scene, scattered and stormy, forcing, luckily, Danny back into the wide angled picture, so that we can finally start operating in the here and now, rather than the thirty minute delay system that wasn’t working all that well for our connective senses.

“Does this scare you?” It shouldn’t, as the performers work hard to draw us into their cluttered mess of attachment and absurdist demonic stalking. If it wasn’t for the fractured attempt for structural uniqueness, this Monsoon Season, courtesy of All For One Theater at the Rattlestick Playwrights Theater might have flooded our senses from start to finish with its wound up black bird metaphoric madness. As it stands, it’s a three legged neon wonder bird, posed to fly. It gets caught up in the winds and the rain of the Monsoon, wobbly finding glory in the revved up bloody mess of the needy. Shuffling between the two wonderfully adept monologue pieces a bit more aggressively under one timeline, rather than presenting one followed by the other, might make the piece fly stronger with better interconnected wings, although it might feel far too traditional and less edgy.  Or maybe not. It’s hard to say, but somehow the choppy chainsawed structure flies, like a peach tossed into the rain-swollen river below, finding different colors to focus on in its short flight.