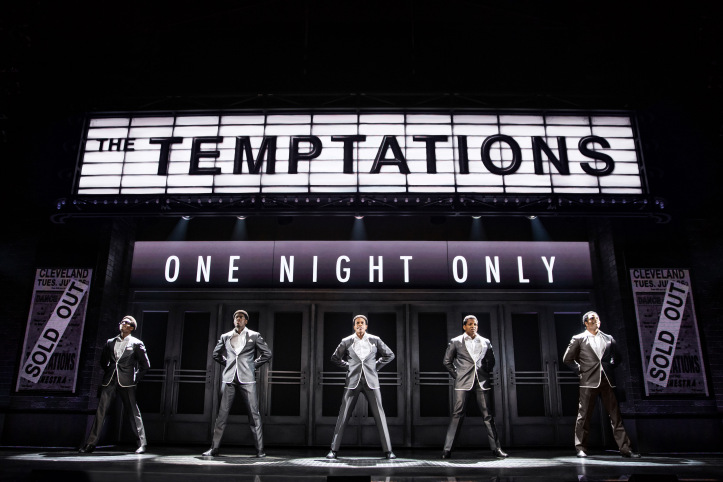 After six months of lost freedom, Otis Williams, played to the powerhouse hilt by Derrick Baskin (2ST’s Whorl Inside a Loop) ropes in the others, one by one, with swift ease. He’s out to form one of the most famous musical groups ever, all to the rhythms and beat of the Legendary Motown catalog, where Broadway’s newest jukebox musical, Ain’t Too Proud: The Life and Times of The Temptations gets its sound from. Based on the memoir, ‘The Temptations by Otis Williams‘ with a stage adapted book by Dominique Morisseau, the playwright of the magnificent Paradise Blue, The Temptations get to take the centerstage spotlight they most richly deserve. They are truly legendary; one of the most successful groups in popular history, who released a series of hit singles and albums with Motown Records during the 1960s and 1970s. It was just a matter of time before this American all-male vocal group took to the stage, and just like the other jukebox autobiographical musicals that have hit Broadway, like Jersey Boys, Summer: The Donna Summer Musical, The Cher Show, and the soon to arrive Tina – The Tina Turner Musical (a musical I can not wait to see), the music, the style, the moves, and rhythm are what remains in the center, and the vantage point is aligned by the guiding hand of Otis, the only surviving member of the ‘five classic’ Temptations.

The group formed in 1960 in Detroit, Michigan and as Ain’t Too Proud fleshes out their dynamic history under the watchful eye of the group’s founding member, Otis Williams, the dye is set and the formulation looks crystal clear. He is The Temptation‘s father, bringing together the short bright light of Elbridge “Al” Bryant with the talented Melvin Franklin, played deeply and wisely by the magnificent Jawan M. Jackson (Broadway’s Motown: The Musical), Eddie Kendricks, beautifully portrayed by the talented and Tony nominated Jeremy Pope (MTC’s Choir Boy), Paul Williams, embodied by the handsome and charming James Harkness (Broadway’s Beautiful). Bryant was quickly replaced by the legendary bad boy David Ruffin, portrayed with mic-catching fire by Ephraim Sykes (Broadway’s Hamilton) givings us the classic five. And boy can these men sing and dance. Ruffin was the lead vocalist on some of the group’s biggest hits, including “My Girl” (1964), “Ain’t Too Proud to Beg” (1966), and “I Wish It Would Rain” (1967), and on this Broadway stage, we are gifted with some spectacular recreations of their iconic sound, courtesy of musical director Kenny Seymour (Broadway’s Memphis), orchestrator Harold Wheeler (Broadway’s Side Show), and music coordinator John Miller (Broadway’s Waitress). It’s a Motown treat made in Broadway heaven, and for those fans, and even the ambivalent, the musical joy is real and the moves are impeccable.

It’s a true treasure trove of hits, and as history states, the group, guided by their music executive Berry Gordy, strongly portrayed by Jahi Kearse (Broadway’s Holler…), music collaborator/writer Smokey Robinson, well played by Christian Thompson (Theatreworks’ Skeleton Crew) and the competitive drive of writer Norman Whitfield (Jarvis B. Manning, Jr.), the hits keep coming, one after the other. Much like the lead vocals, and that ever revolving and accelerating conveyor belt stage. This is The Temptations as set down in stone by Otis, and it makes one wonder about perspective and accuracy when watching a bio musical of a group where only one member, the ringmaster of Ain’t Too Proud, has the final say as to what went down.

Here the troubles really begin with an inflation of ego and the struggle with substance abuse, all rolled up into the wild Ruffin character, although he is not alone on that stage battling with those show biz demons. His behavior got him booted out, kicking and screaming, and replaced in 1968 by Dennis Edwards, wonderfully portrayed by Saint Aubyn (PMP’s Hairspray). With his voice, the hits keep carring forth, such as “Cloud Nine” (1969) and “Ball of Confusion (That’s What the World Is Today)” (1970). The group’s lineup is constantly in flux, with the treadmill changes fueled by addiction, bad behavior, and heartbreaking disease, all beautifully choreographed by the exacting work of Sergio Trujillo (Broadway’s On Your Feet!). It’s laid out strongly, on the constantly evolving set by master designer, Robert Brill (Broadway’s Jesus Christ Superstar), with exacting detailed costuming by Paul Tazewell (Broadway’s Escape to Margaritaville), dynamic lighting by Howell Binkley (Broadway’s Come From Away), a perfect quality sound design by Steve Canyon Kennedy (Broadway’s Catch Me If You Can), and solid albeit straight-forward projection design by Peter Nigrini (Broadway’s SpongeBob..). Later members of the group float in with style including the deliciously talented Richard Street (E. Clayton Cornelious), Damon Harris (Christian Thompson), Ron Tyson, and Ali-Ollie Woodson, effortlessly being incorporated into the group scoring a late-period hit in 1984 with “Treat Her Like a Lady“. The full line up that appears on this Broadway stage is remarkable and epic, and one that will be remembered.

As guided with smoothness and style by Jersey Boys director, Des McAnuff (Broadway’s Summer…), the parade of hits and stars, like Diana Ross, beautifully portrayed by Candice Marie Woods (Broadway’s Women on the Verge), Florence Ballard and Tammi Terrell both lovingly played by Nasia Thomas (Muny’s Hairspray), and Mary Wilson, embodied by the wonderful Taylor Symone Jackson (Oregon Shakespeare’s The Wiz), all get their moment to shine within the overflowing basket of Motown hits. Otis leads us through, holding our hands and showing us his world view. Baskin is electric in the role, and does share his own scars from his journey up to the stars, namely in the arms and eyes of the lovely Josephine Rogers, portrayed with a one dimensional heart by Rashidra Scott (Broadway’s Sister Act), whom Otis married in 1961, and with her, had a son, Otis Lamont, portrayed touchingly by Shawn Bowers (Muny’s Meet Me in St. Louis). It’s Otis’ one area of personal shame, one that Ain’t Too Proud lovingly portrays as the price of fame and fortune. It feels a bit limp and shallow compared to the other demons presented, but Otis is in charge, and no one says “No” to Otis.

The Temptations released four Billboard Hot 100 number-one singles and fourteen R&B number-one singles. Their music has earned three Grammy Awards, with The Temptations forever being remembered as the first Motown recording act to win a Grammy for “Cloud Nine” in 1969 in addition to the Grammy Lifetime Achievement Award given in 2013. Six of the Temptations (Edwards, Franklin, Kendricks, Ruffin, Otis Williams and Paul Williams) were inducted into the Rock and Roll Hall of Fame in 1989, and three Temptations songs, “My Girl“, “Just My Imagination (Running Away with Me)“, and “Papa Was a Rollin’ Stone” (with Broadway Jackson’s spectacular voice finally getting the center stage he deserves at the Imperial Theatre – all I can say about Jackson’s Franklin is “WOW”), are among The Rock and Roll Hall of Fame’s ‘500 Songs that Shaped Rock and Roll’.

Their impact and music cannot be ignored, even if tempted, as we are constantly reminded during this new musical by a smiling Otis. At times, the self congratulatory stance gets in the way of joining them in an authentic feeling of pride and joyfulness, but Ain’t Too Proud clearly is required reading and listening for Rock and Roll history fans and the evolution of R&B and soul music. It will reside alongside the equally as good Jersey Boys as the Broadway framework to build a solid jukebox show. So take a big bow you talented young men, all of you, it is much deserved.