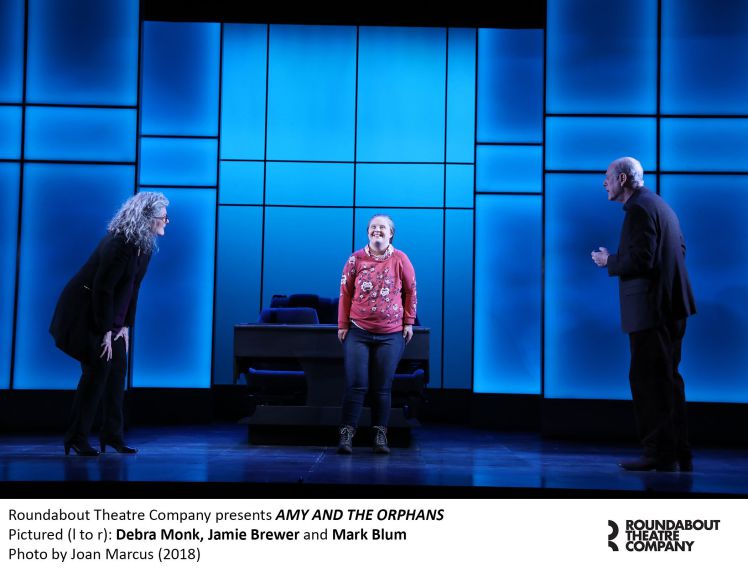 He Says: Amy and the Orphans A Salute to the Real Aunt Amy and to the Play’s Star, Jamie Brewer

He Says: Amy and the Orphans A Salute to the Real Aunt Amy and to the Play’s Star, Jamie Brewer

Ross
The background story for this new play by playwright Lindsey Ferrentino is pretty  intriguing. It might just be more fascinating than the actual play it inspired, if I’m being completely honest . In some ways, I would love to see a documentary about the history behind this play’s inspiration and creation as it might be more captivating than the play itself. It’s not a bad play, don’t get me wrong, but it does need some structural refining work and a big shovel to dig a bit deeper into this fascinating terrain for Roundabout’s Amy and the Orphans to become something great theatrically. As it stands, everyone is very good, both the cast and creative team (set design: Rachel Hauck; lighting design: Kenneth Posner; sound design and original compositions: John Gromada), in this nicely produced play about three grown up siblings, one of which has Down syndrome. This genetic chromosome 21 disorder is shrouded in assumptions and inaccurate perceived limitations adding a complex layer of guilt, shame, and misconceptions within this family’s complicated dynamic stuffed with grief and an awkward reconciliation of siblings who have grown (or maybe ran) apart.

The main ingredient that elevates Amy and the Orphans from good to interesting is its connection to the playwright’s own familial history, the chance meeting with the very talented and capable television star and actress, Jamie Brewer, best known for starring in the anthology television series, “American Horror Story“, and her strong emotional performance as Amy.  Ferrentino’s new play, developed from day one due to her strong relationship to and with Roundabout Underground, instrumental in the production of her 2015 powerful play, Ugly Lies the Bone, was a passion project of hers that seed was planted unconsciously many many years ago. Ferrentino, as a child spent time with her loud and funny aunt, Amy.  In a note within the program, Ferrentino shares with us the story of her aunt Amy who was born with Down syndrome during a time when the medical community, believing that these children would most likely never learn to read, write or take care of themselves, would strongly suggest to the parents to place the child in a state-funded institution for life-long care.  Aunt Amy was one of those children who spent her whole life separated, but in her life, she did accomplish all of those things and more. Years later, Ferrentino started to ponder what Amy’s life was like, or could have been like, had she not grown up always on the outskirts of the family, never really being a part of their interactional life on a daily basis.
In this scenario, we have the foundations of Amy and the Orphans, but it wasn’t really until the playwright was connected to an agent who specifically represents talented actors with Down syndrome, and then introduced to the accomplished Brewer that, despite the playwright having known her aunt her whole life, was she able to really see what people with Down syndrome are truly capable of, and what obstacles they have to leap over just to be seen as capable.  The ‘Amy’ we see before us (or the ‘Andy’, an equally accomplished actor by the name of Eddie Barbanell who is Brewer’s understudy) was born out of that meeting, and this is the play that Ferrentino wrote, not just for Brewer or Barbanell, or even just for her aunt, but for all of us who have these old and misinformed notions that need to be altered.

This is a very noble intention, and that altered perception is lead not only by Amy and her smart and thoughtful interactions, but also by the character of Kathy, Amy’s nurse, care-taker, and friend, who has an opinion and a story to go with everything.  Played with a strong stance and thick accent by the wonderful Vanessa Aspillaga (LCT’s The Clean House), she plants herself fully in the driver seat of this pseudo-road trip, there for our amusement but also as the instructive tool that is needed to bring awareness to us and to the two siblings of this deconstructed family.  These two, who have come to Queens to pick up Amy from the institution where she now lives, and take her out to Long Island for their father’s funeral (their mother has died earlier, although Amy was never told), are played with annoying charm by the magnificent Debra Monk (Broadway’s Curtains) as Maggie and Mark Blum (PH’s Rancho Viejo) as Jacob.  Both are complicated souls, disconnected to each other and to Amy, the sister they only saw on Sundays when their parents, [slight spoiler alert] played wonderfully in a sly “This Is Us” style by Diane Davis (Broadway’s Golden Boy) and Josh McDermitt (“The Walking Dead“), used to gather up the whole family and go to the movies. The family unit is frayed, complicated and riddled with guilt and discomfort, expertly dissected by Ferrentino and beautifully orchestrated by director Scott Ellis (Broadway’s She Loves Me).  Neither of the two visiting, now adult siblings know how to talk or engage with one another, and their discomfort with Amy is made more apparent by every one of Kathy’s interjections.

It’s a road trip that neither really want to take but feel they have to, much like the same manner those Sunday movie days were a form of conflict and duty when these three were young, layered with alternating doses of shame and love.  The questions of ‘doing the right thing’ and what really would have been the best are played with and contemplated but without much resolution or deep engagement.  The playwright doesn’t seem to really know what to do with these two quarrelsome siblings, played as well as can be by Monk and Blum.  Their idiosyncrasies become almost more annoying than funny, but the true insight into Amy and these two Orphans comes from Kathy and Amy herself.

It’s no surprise that Amy speaks in vintage movie quotations as a way to connect and show her emotional state. It is what she grew up believing to the be the way a family interacts. In that manner, Ferrentino serves the character and the actress well, giving Brewer a true chance to shine, center stage in the final surprisingly telling monologue. It is worth the wait, and although the play as a whole is flawed and doesn’t dig deep enough into that box of familial memories laced with shame and guilt, the actress, speaking from her heart, using another writer’s words, both Ferrentino’s and the movies she grew up on, shows us all the magnificence she is capable of.
For more go to frontmezzjunkies.com
Related ItemsAmy and the OrphansDebra MonkJamie BrewerLindsey FerrentinoMark BlumNewRossRoundabout Theatre Companyroundabout undergroundScott EllisVanessa Aspillaga
Off Broadway

RossNovember 21, 2020
Read More
Scroll for more
Tap
Voices Speak Out This Week at the Museum of Jewish Heritage
Old Stock: A Refugee Love Story Shows How Love Conquers All