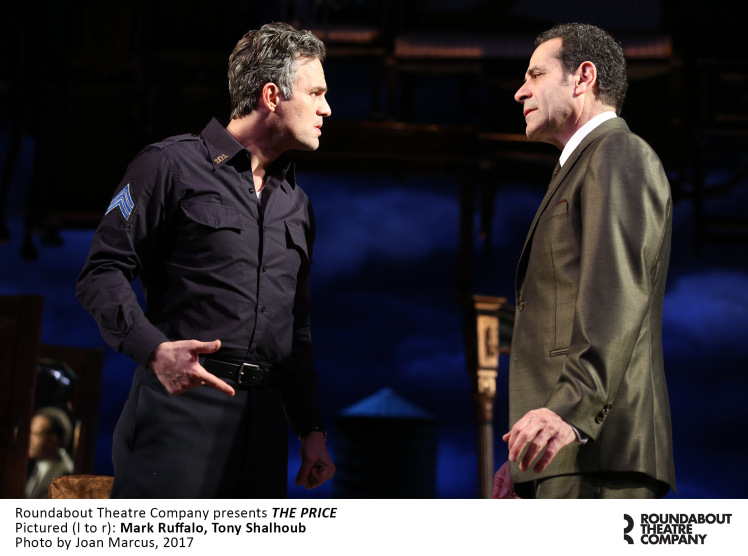 He Says: Arthur Miller’s The Price: In the Style of a Better Miller

He Says: Arthur Miller’s The Price: In the Style of a Better Miller 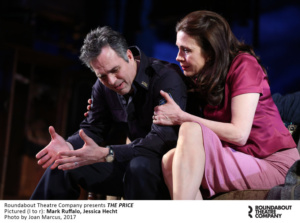 This little produced play by Arthur Miller, a later entry into this playwright’s body of work (1968), was Miller’s most successful play after Death of a Salesman. The Price is quieter in familial tragedy than many of his more epic and well known plays:  Death of a Salesman (1949), All My Sons (1947), and View from the Bridge (1955). It’s also a lot simpler in design than his classic The Crucible (1953). And it is understandable that it feels smaller and less grand in scope and style. The story resides in the past, layered like the dust on all the furniture that still inhabits the top floor apartment where the father had failed them, and later, gave up. The set, beautiful and intricately designed by Derek McLane, lighting by David Weiner, and costumes by Sarah J. Holden, has all the density and heaviness of these two sons and their now deceased father. This is the perfect space for Miller’s penetrating family drama to unfold in. As directed by Terry Kinney, all the secrets will be exposed like layers of wallpaper removed, only to find another beneath. And another after that, until the bare wall stares back at these two grown men, bewildering them as to where to go or what to do. 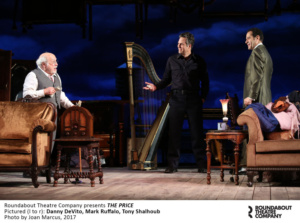 Mark Ruffalo returns to the Broadway stage in a part that seems tailor made to his physicality, his vocals, and his persona. This is a man, Victor Franz, who gave up loftier ambitions both intellectually and financially, to care for his ruined father in this exact same apartment. It’s not surprising to learn that Miller’s own father lost all his fortune much like the unseen father in The Price in the Wall Street Crash of 1929. At the time, Victor gave up on his dreams, never finished college, and joined the police force. He now walks, talks, and stands like a policeman and with Victor on the verge of retirement, he has to figure out what is next. His wife, Esther, played by the always interesting and grounded Jessica Hecht, has grown into a very different woman than the one that climbed those stairs so many years ago. In some ways, it’s hard to see them as a couple in the first scene. She seems more like a doctor’s wife, and not a cop’s. And this makes more and more sense as we move forward. This is her inner battle, and we watch her weigh the pros and cons of possibly marrying the wrong brother as she watches the brothers come face to face with years and years of resentments and jealousy between them. 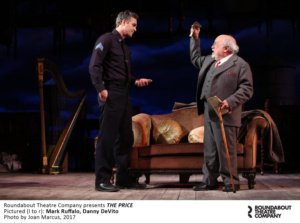 The main device that brings everyone, including the brother, Walter (Tony Shalhoub) that has ignored Victor for the last sixteen years, is the need to sell all this furniture before the building is demolished. Their father has died so long ago, but just like the bad blood between these brothers, this furniture has sat quietly gathering nothing but dust over all this time. It’s a strong simple metaphor of the resentments between these two men, and when Danny DeVito arrives as the old talkative consolidator, Gregory Solomon, to name his price for the whole lot of furniture, the resentments arise like the dust disturbed and thrown into the air. Swirling and settling, just to be thrown back into the air again and again. Will they ever settle up after each of the layers of truth are revealed, or is there another truth hiding underneath to cause the settled dust to become unsettled again? 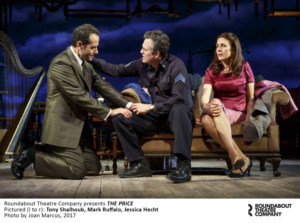 Danny DeVito, coughing and hacking his way up and onto the stage, almost steals the show away from Ruffalo and Shalhoub. He’s the master comedian and sage, commanding every moment while these two very fine actors watch him harness all the attention away from the main tragedy being uncovered. Hecht somehow manages to hold her own when paired with him, as it is no surprise. She’s a gifted actress, especially with Miller’s repertoire, having played almost all the disappointed wives in Miller’s plays.

The Price is not one of Miller’s best plays. It lacks the larger scope and global themes that exist in his greater plays, but to be a lesser play in that catalog is nothing shameful. Roundabout has pulled out all the stops creating an atmospheric story with history, literally, hanging over their heads. It’s a solid revival of a less than solid play. As the consolidator says at one point, “you can call this hat in a  Biedermeier style (I’m not sure I have the quote right, forgive me, I’m on holiday right now…), but it doesn’t make it a Biedermeier”.  That’s not to say this production isn’t worth seeing.  It is a solid production played by a team of pros, but it just isn’t Death of a Salesman…