He Says: Assassins The Killing Fields 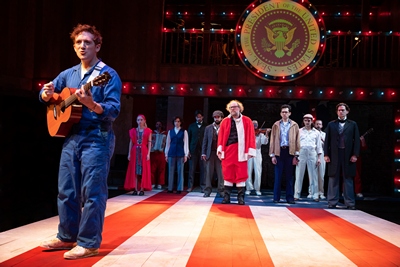 He Says: Assassins The Killing Fields

Assassins at the Classic Stage Company is billed as a star-studded show that promises excitement and intrigue. With music by Stephen Sondheim and book by John Weidman, it won the Tony back in 2004 as well as the Drama Desk Award the same year. The musical looks at nine men and woman who either killed (or tried to kill) one of the presidents of the United States. What Weidman does well here is look at how demented some of the assassins were. Some wanna be killers are actually funny. Take Samuel Byck (Andy Grotelueschen), he wanted to fly a plane into the white house to kill President Nixon. He sends a tape recording to Leonard Bernstein (also Hank Aaron and others). When he tells Bernstein that he doesn’t care about the little people and at the same time worships him, it is quite amusing. Sara Jane Moore (Judy Kuhn) who wants to kill Gerald Ford is absolutely out of her mind. She brings her dog and son to the attempted assassination because she had no idea that he was off from school. Charles Guiteau (Will Swenson), was an author and believed that James A. Garfield owed him a position as French Ambassador.

The show is informative in the fact that many do not know who the people are who attempted to assassination or kill an American president or why. We do know John Hinckley, Jr (Adam Chanler-Berat) tried to kill Reagan, Lee Harvey Oswald (Ethan Slater) and of course, John Wilkes Booth (Steven Pasquale). Pasquale and Slater are the most effective in this performance, as the Balladeer/ Oswald and Booth. Slater is outstanding, as he locked with the audience’s attention. Pasquale is equally effective; a good singer, actor and dancer, he owned his role.

Assassins was first was brought to New York in 1990, it has come back twice (2004 and 2021). The CSC has designed its stage with a three-quarter thrust and put the orchestra up top with roaming musicians on stage. This allowed for both movement and a feel of closeness to the audience. It did, in effect, limit the audience from hearing all the words sung as well as dialogue between actors as the show is not mic’d. The narrative at times was sketchy, as characters come and go, leaving the audience bewildered. This slowed the pace of the play and confused the audience. This continued throughout the musical (people on both sides of me were sleeping and there were walk-outs).

Unlike most Sondheim musical’s, Assassins does not have many memorable songs. “Everybody’s Got the Right”, “The Ballad of Booth” and “Unworthy of Your Love” were the only ones that stuck out. Most of the other songs fell by the wayide, as well as the acting.

Besides Slater and Pasquale Eddie Cooper, Andy Grotelueschen and Will Swenson also stood out.

The musical raced to where it wanted to get to then hoovered. In the end Assassins shot itself in the foot.

Suzanna BowlingJune 18, 2022
Read More
Scroll for more
Tap
Countdown to Christmas Day Our Holiday Gift Guide: The Gift of Show
The Box Wins Best Play, Best Director and Best Actress at NY Fall/Winterfest and I Can Tell You Why.