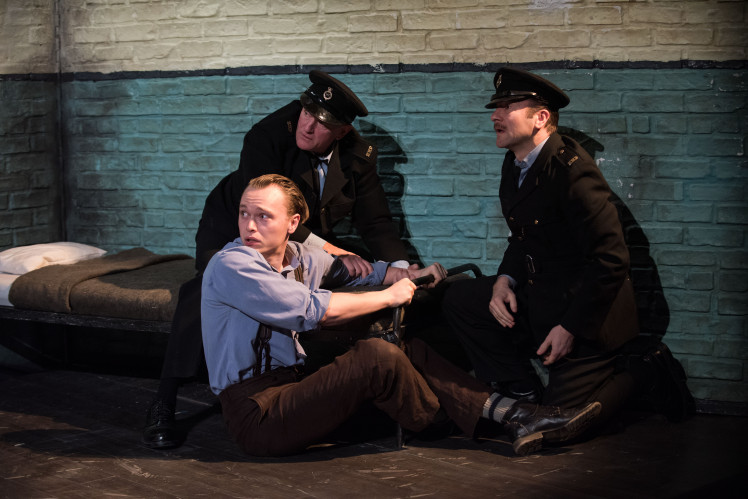 He Says: ATC’s Hangmen The Smell of Death Never Really Vanishes, Does It?

He Says: ATC’s Hangmen The Smell of Death Never Really Vanishes, Does It?

Ross
The first scene throws us quite quickly into the dark world of the Hangmen in 1963 England. A man (Gilles Geary) with an abject look of terror on his face, that feels as inconsequential to the story as any in that bleak cell room, pleads for his life as he proclaims his innocence. Something these Hangmen, I’m sure hear every day as they carry out their deadly duties. The head hangman, Harry, played with puffed up bravado by Mark Addy (Royal National’s Collaborators) is relaxed and workman-like, unaffected by his pleas, assisted by the nervous and stammering assistant, Syd, played perfectly weasel-like by Reece Shearsmith (Duke of York’s The Dresser); the two get the job done, eventually, and then go for breakfast. It’s a tense and electric scene, layered in twisted humor, making us laugh as the edgy violent feelings about what is to come grows. Beautifully orchestrated by director Matthew Dunster (Royal Court’s Liberian Girl) and fight choreographer, J. David Brimmer, this first moment gives us very little idea what importance to take from this mayhem or where current Academy Award nominee (“Three Billboards Outside Ebbing, Missouri“) Martin McDonagh is about to take us.
Then with a tense and anxiety producing flicker, courtesy of lighting designer Joshua Carr (West End’s RAZ) and sound designer Ian Dickinson for Autograph, Hangmen‘s powerfully eerie set, created by the inventive set and costume designer, Anna Fleischle (Apollo’s Everybody’s Talking About Jamie) evolves into something quite different, amazingly taking us to a place that was entirely unexpected. This new locale, a meticulously created family-owned pub in Oldham, Lancashire is really where this tale is going to spin out, much to our dark and humorous pleasure. Holding court as he loves to do, is Harry, the ‘Second-Best’ hangman in England, the man we saw just going about his work casually in the first scene, is now, we discover, being put out to pasture due to the abolishing of ‘death by hanging’. What will this historic news bring forth?
Surrounded by his admirers; Richard Hollis (Broadway’s The Curious Incident…) as Bill, Billy Carter (Broadway’s A Moon for the Misbegotten) as Charlie, and the spectacularly hilarious John Horton (Broadway’s Noises Off) as Arthur, characters that are as dim-witted as they are funny (and unfortunately slightly underwritten), who see Harry as a bit of celebrity, a young newspaper reporter (Owen Campbell) tries to get a headline-worthy reaction out of Harry to the day’s historic news. Watched over by his wonderfully period-perfect wife, Alice, played magnificently by Sally Rogers (BAM’s Blue Heart), his moody teenage daughter, Shirley, anxiously played to perfection by Gaby French (Hampstead’s Scarlett), and his sardonic police inspector friend, Fry, played by the steadfast David Lansbury (Broadway’s War Horse), Harry jostles for greater status over the other, now-retired celebrity hangman, Albert Pierrepoint, whose hanging numbers might be higher, but within the off-handed comments about Germans, there are some who might quibble and argue against Albert’s title of ‘Best Hangman in England’. The main one being Harry who views them as running ‘neck and neck’, until push comes to shove with the impressive turn by Maxwell Caulfield (Broadway’s An Inspector Calls) when Harry’s true nature starts to show.
But for the time being, all seems very jovial and fairly peaceful on this momentous day. That is until a disconcerting well-dressed southerner strolls in, asking for a pint of whatever, as “they are all the same up north, aren’t they?”, and a bag of nuts.  No one can quite make-out what this shaggy haired dandy fellow by the name of Mooney wants. Played with a brilliantly seductive and vaguely menacing stance by Johnny Flynn, a role he originated at the Royal Court Theatre and Hangmen‘s West End transfer, we soon find out. Or do we? He unquestionably doesn’t fit in at this typical small northern town pub, but young Shirley is intrigued, as is her mother, initially. But things most decidedly start to feel tense in that room, and as more time passes, and more pints are consumed, the electricity and sense of impending violence and doom escalates, just as the storm outside those doors worsens.
Coming to the Atlantic Theater after its very successful run in London, Hangmen packs a powerful and dark humored punch that keeps you dangling on the edge of your seat, feeling squeamish and nervous about all that goes on within the walls of this simple neighborhood pub. The casualness of violence peppered with racist and sexist comments, helped along by the dialectic couching of Stephen Gabis, is unsettling and disconcerting. McDonagh’s writing shines as bright as the gallows is dark and deadly in this typical-feeling play from Ireland’s most acclaimed living playwright.  The feeling he has for these people is as solid and British as I hear “Three Billboards...” is revolting, and American, showcasing the worst of the Missouri lot. With precision and sinister glee, Hangmen makes us glad McDonagh, who wow’d us with the epic and ferocious Pillowman and The Beauty Queen of Leenane over the years, has finally returned to Atlantic with his first US premiere in 8 years, surprising us with a few unexpected, dynamic, and sometimes hard to swallow orchestrations and twists, all the while engaging us completely with a breathless and ferocious relish. Welcome back!

Robert MassimiJanuary 12, 2022
Read More
Scroll for more
Tap
Cancer Gets a New Look in Eve Ensler’s In the Body of the World
One Of Broadways Best Jan Maxwell Has Passed On