He Says: Atlantic Theater’s The Secret Life of Bees Buzzes Beautifully Around My Head so Sweetly 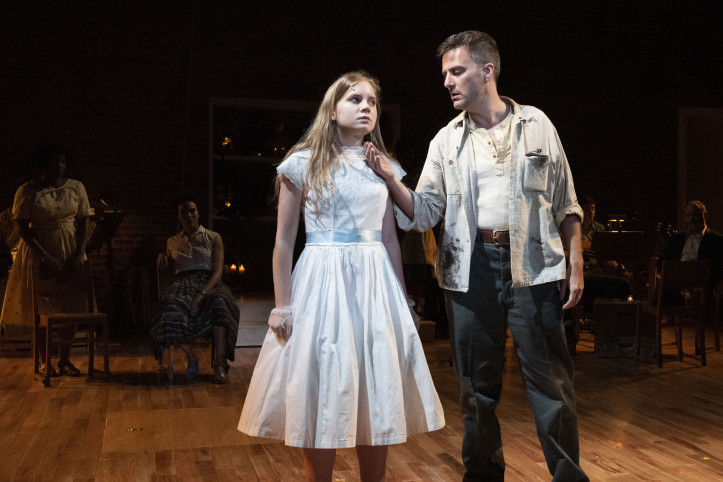 He Says: Atlantic Theater’s The Secret Life of Bees Buzzes Beautifully Around My Head so Sweetly

On an exquisite candle lit stage of exposed brick, emphasizing the poetically beautiful arched walls of the Linda Gross Theater, The Secret Life of Bees, Atlantic Theater‘s new musical buzzes to life to the rhythmic beat of a spot-lit drum. It’s a river of gold, this engaging melting sun beginning, with a tapestry of voices melting together like honey fresh from the comb. The disturbingly historic trouble brewing at the dawn of the Civil Rights battle rumbles off in the corners of the expansive space, spreading a haze of fear and violence definitely on the wrong side of right, crafted and tied together with the strong coarse rope of Lynn Nottage’s (Sweat) glorious book, entwined and complimented by the music of the illustrious Duncan Sheik (Spring Awakening), and lyrics by the poetic Susan Birkenhead (Jelly’s Last Jam).

The bloodied knees of “The Girl Who Killed Her Mother“, performed with tense and scared tenaciousness by the detailed and complex Elizabeth Teeter (Broadway’s The Crucible), sends a shudder down into the dark place dwelling of our collective soul, making us want to pray for the wise and understanding hearts kneeling before a deadened-heart daddy. “Sign My Name” is everything and all one could hope for during that frighteningly bleak yet hopeful time, borne on the righteous hard-working back of Rosaleen, determinedly portrayed by the wonderful Saycon Sengbloh (Broadway’s Eclipsed). She enlivens the arc giving depth and desire as we watch her breath life into herself. But the sweet hearted center of the honeycomb rests within LaChanze (Broadway’s Summer…) as queen bee August, always buzzing close by as warm and comfortable as a fall breeze; October might have been more apropos for this Mother Earth (my favorite month). Her voice dazzles, filling the space with her “Secret Life of Bees” and it’s glorious symphony of wings, backed most beautifully by the other strong soulful women who take hold; Romelda Teron Benjamin (Queenie), Vita E. Cleveland (Violet), Jai’Len Christine Li Josey (Sugar Girl). They find God in their own image choking up my throat with tears and a love that doesn’t taste any different, even when the honey is born from a different flower.

The landscape of the bees and the holy virgin bring lyrical beauty to the space, gently harvested by scenic designer Mimi Lien (RTC’s True West) with delicately construed costumes by Dede Ayite (Broadway’s American Son), elegant lighting by Jane Cox (Broadway’s King Lear), and a beautifully calibrated sound design by Dan Moses Schreier (Broadway’s Gary…) gracing the scenario with gentle wings. The other sister months, namely June, strongly played by Elsa David (Public’s Kings), and tender May, delicately portrayed by Anastacia McCleskey (Broadway’s Waitress) fill out the safe haven Rosalee and Lily stumble into, finding the escape they need from the world and T-Ray, tightly played by Manoel Felciano (Broadway’s Amêlie). Too many people, they say, are lost to that river of sadness, as the pain that is registered in their voices and souls worry about the trouble that may come down upon this house. The fear is real, and we join in with the asked question, “When will it stop?”

The Secret Life soars under the clearly defined vision of choreographer Chris Walker (Public’s Mlima’s Tale), making the never been seen or heard before imaginable, with music director Jason Hart (MCC’s Alice by Heart), music contractor Antoine Silverman (Broadway’s Tuck Everlasting), and orchestrator John Clancy (Broadway’s Mean Girls), bringing poetry to the beating of the bees, courtesy of the inventive puppetry of Achesonwalsh Studios. The men that populate the bee hive world of the spring and summer months both represent the kindness of love and connection, unlike the world Rosalee and Lily had to run from. Neil, gently portrayed with a patient heart by Nathaniel Stampley (Broadway’s Cats) can’t be swayed by David’s dismissive June. Much in the same way that Zachary, dynamically portrayed by the charming Brett Gray (Netflix’s ‘On My Block‘) is filled with optimism and hope in a world greater than what is around him. As directed with a steadfast heart by Sam Gold (Broadway’s A Doll’s House Part 2), this new musical, based on the novel by Sue Monk Kidd (The Mermaid Chair) flies high without ever stinging with too much sweetness or discomfort. The pollination is exact, and the flower that rises up, beautiful.