He Says: Bat Out of Hell Roars, Revs, and Sputters on Stage at NYCC 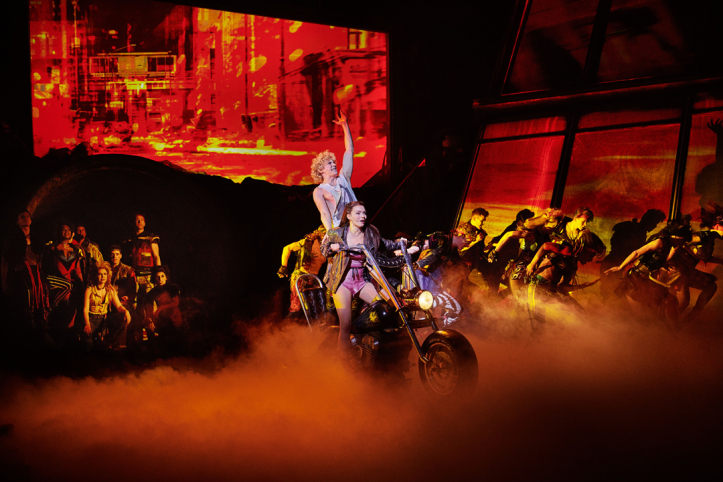 He Says: Bat Out of Hell Roars, Revs, and Sputters on Stage at NYCC

“Would you offer your throat to the wolf with the red roses?”  Good question. Would I?

That’s a harder question to answer than I thought as this new musical flies over from sell out crowds in London’s West End and Toronto, revving up its motor on the New York City Center stage on these hot August nights. The national tour of this show has been cancelled, but my theatre companion was still super excited, as was I, as this is the music of my youth with songs that I loved for decades, particularly for its passion and theatricality. It now feels a bit adolescent, but the grandness of Meatloaf’s brand of Rock and Roll still captivates and gets my blood pumping. But the answer to that first question lies somewhere in the in-between of heaven and hell, with objects and characters that the creators hope appear more believable and entertaining in the rearview mirror, but sadly feel smaller and somewhat more silly. This is by no means your standard City Center audience or show, but this Bat Out of Hell is no typical Broadway styled musical either. It’s machinery is decidedly different, and with a non-sensical book stuffed clumsily between a whole lot of epic and perfectly performed music and lyrics by Jim Steinman, the man known for helping usher the phenomenally talented Meatloaf to stardom with this playlist, this rocking new musical roars its engines wildly, fueled solely by a superb vocal force that could fill a rock and roll arena stage. Those voices are exactly what this show needs, but the mess that surrounds it stalls the ride too often, making the motorcycle skid and slide, even with all that musical talent trying with all their heart and soul to keep the Bat journey on track.

“Will he offer me his mouth?”

The premise is a dystopian forever-teenager rebellion, naturally between the towering ‘haves’ and the underground ‘have nots’ filled to overflowing with a slight “Rebel without a Cause” ridiculous. It’s all hard metal and neon, but luckily, this Bat Out of Hell is driven by the charismatic bad boy Strat, played by the supremely gifted singer, Andrew Polec (off-Broadway’s The Fantasticks), reprising the role he won accolades for in London and Toronto. Subtlety is not a word in Polec’s vocabulary, and he’s a bit of a silly rebellious poser, but boy, can the man sing. Without him channelling the epic style of Meatloaf, this two-wheeled vehicle would not have the fuel to even ignite, let alone drive forward a foot. Coupled with the rich girl in search of her bad boy, Raven, portrayed by the phenomenally voiced Christina Bennington (West End’s Show Boat), who created and originated the role in the West End, the fire cracks strong, but only during the vocal arrangements. Courtesy of music director Ryan Cantwell; orchestrator Steve Sidwell; music coordinator Howard Joines (Broadway’s Beetlejuice); and musical supervisor with additional arrangements by Michael Reed (West End’s Sunset Boulevard with Glenn Close), the music soars, especially when these two are let loose on those “nights that were so cold“. But when the two try to act their way around the clumsy staging and structure of the piece, the posturing and the blocking trip them up in a cringe-worthy manner. They, and the whole cast flood the engine with a falseness that comes close to deadly, shutting down the engine until the next magnificently sung classic song comes forward out of the fog and pulls this talented crew back into the spot light.

“Will he offer me his teeth?”

One of the strongest moments comes strutting in when Zahara, played to perfection by Danielle Steers (Donmar’s Sweet Charity) informs the smitten Jagwire, strongly portrayed by Tyrick Wiltez Jones (Broadway’s Hairspray) that “Two Out of Three Ain’t Bad“. Her voice and presence resonates like no other on that stage, bringing a bit of Cher strength and courageousness to this woman and her situation. Stephanie J. Block would be proud, as she makes us all sit up and take notice in a way that will keep us tuned in to Steer’s career for a long time to come.

Alongside her powerful presence is the magnificent Lena Hall (Broadway’s Hedwig) as Sloane, not really being given a formula to shine as strongly as she could and should, especially when placed beside her husband, Falco, played a bit too comically by the strong voiced Bradley Dean (Broadway’s Doctor Zhivago). Her Dashboard Light moment is dimmed, overpowered by the projected visuals provided by the talented Finn Ross (Broadway’s Mean Girls) and the messy direction. They distract from that incredibly powerful song that lives powerfully in my heart from days long ago, making our eyes unsure where to look. With all that unmotivated movement and the laughable staging by director Jay Scheib (Royal Opera House’s Mamzer/Bastard), I wanted to turn the engine off on that production number and just pleas with those two phenomenal singers to simply stand still and sing that fantastic song without all that unnecessary fanfare, just so I could find the essence and the emotional core at the heart of that iconic song. This was not the first, nor the last time I had that impulse.

“Will he offer me his hunger?”

There isn’t one person on that stage that shouldn’t be on that stage singing those songs. Each one has a powerhouse voice that is thankfully given its moment to shine with brilliant fire and extreme softness combined, including the oddly written role of Tink, well played by Avionce Hoyles (off-Broadway’s What Happens in Vegas). He becomes the Judas of the night, betraying his Strat out of petulance, and his act throws the rest of the crew out of the frying pan, and into the fire with a kiss. The melodrama flies forward like a futuristic soap opera mixed with a Road Warrior extravagance, forcing the vocally talented band of Wasted Youth misfits, made up of a crew of uber-talented singers and dancers: Paulina Jurzec (Camera), Will Branner (Ledoux), Lincoln Clauss (O’Dessawuite), Kayla Cyphers (Kwaidan), Jessica Jaunich (Valkyrie), Adam Kemmerer (Markevitch), Nick Martinex (Astroganger), Harper Miles (Scherzzo), Erin Mosher (Vilmos), Aramie Payton (Denym), Andrew Quintero (Hjollander), Tiernan Tunnicliffe (Goddseilla), and Kaleb Wells (Hoffman), to run and kick with wild abandonment to the horrendously 80’s choreography by Xena Gusthard. In the chaos of the over-the-top melodrama, I really just wanted them all to stop running about for no reason, and just sing those songs. They all have that internal power to hold us in their vocally-charged hands, and in that moment, I would have been fulfilled.

“And will he starve without me?”

The whole thing is too complicated and serious for its own good in the way it is delivered. The set and costumes Jon Bausor (West End’s True West) with original costuming by Meentje Nielsen, forces a lot of the inner second floor action to be video’d live and projected all around the stage, distracting our attention away from what is going on right in front of us, and with no great insight given, the action seems pointless. The lighting by Patrick Woodroffe and the sound design by Gareth Owen (West End’s Come From Away) works, but they can’t hide the flaws of the design and the directorial vision.

In the end, I can’t say I didn’t love the music and the performances, as they rev that rock n roll sound brilliantly up to the heavens giving this Bat out of Hell some solid vocal wings to fly on. But “For Crying out Loud“, have some faith in that phenomenal sound, and let those “Dead Ringers for Love” live loud and clear without being pushed and prodded to skid so inauthentically across the stage.  The acting and the direction, including the unmotivated movement and blocking, are a bust, but “I’d Do Anything for Love” to hear those voices bring magic to those songs and gun that engine forward until those “Rock and Roll Dreams Come Through“.

RossNovember 16, 2022
Read More
Scroll for more
Tap
Bat Out of Hell Misses Rising To The Top
Gideon Glick To Join Little Shop of HorrorsFor Two Weeks of The Run