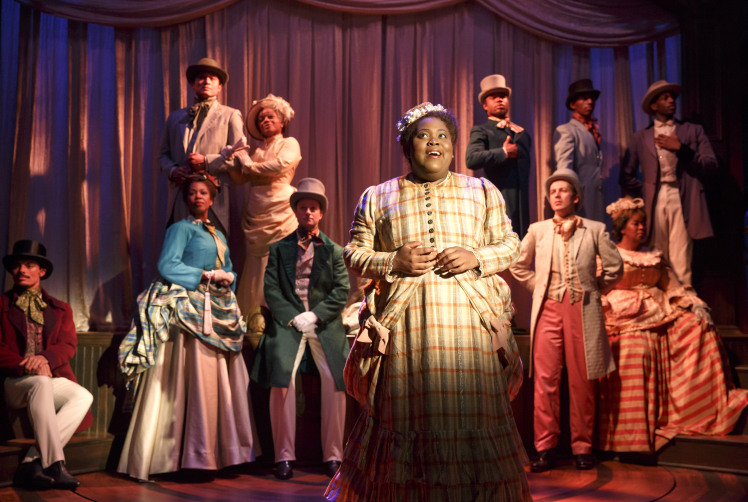 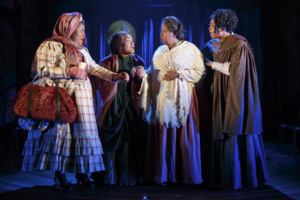 There is a big old fashioned style musical being presented over at Playwrights Horizons this early spring called Bella: An American Tall Tale.  And it’s quite the story to behold.  The lead, an electric Ashley D. Kelley (OSF’s The Wiz) as the title character, tells us from the get-go that this Tall Tale is 110% entirely true, but I have to wonder.  There are so many modern references to the pop goddess Beyonce and others, that this might be the most modern old-fashioned musicals around.  In many ways that is a compliment to Kirsten Childs (Book, Music, Lyrics) and her world premiere musical, but at far too many moments, the modern twist works against the piece, causing it to flail around in it’s own confusion in style and purpose. Ultimately, this show leaves us scratching our head and asking the question, “what is Bella trying to be?” 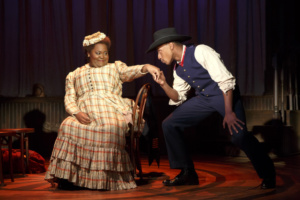 At times this musical, directed with a distracted eye by Robert O’Hara, is the quintessential  Wild Wild West Looney Tunes cartoon filled with racial stereotypes poking fun of themselves and others. At other moments, it is a generational story of a black woman’s journey trying to find a her place within the power structure of a white man’s world, with a spiritual time traveling ancient protector helping her survive. While during other segments, it feels like a more political commentary of the black experience in American in general. Maybe the last two ideas would have worked well with each other, but throwing in so many outlandish characters and moments of pure ridiculousness only manages to take us away from the deeper dynamics that might have been discovered.  Bella, the central big boned figure in this tale, must head out on her own after an altercation with a rich spoiled white man (Kevin Massey) causes her to be labeled as a ‘Wanted Woman’. Leaving behind her beautifully voiced mother, a wonderful Kenita R. Miller (Broadway’s The Color Purple) who also plays the refreshing and fun Miss Cabbagestalk; her Aunt Dinah, a very modern and sassy Marinda Anderson (PH’s A Life, Far From Heaven) who also later plays Ida Lou Simpson, and her grandmother, a fun and fine voiced Natasha Yvette Williams (Broadway’s The Gershwins’ Porgy and Bess) who, like everyone here, does double-duty as the Spirit of the Booty. These generational family moments resonate like few others, filling our hearts with care and devotion. The grandmother, who is slowly loosing her mind, keeps calling out for one of her ancient ancestors to watch over Bella.  The Spirit of the Booty, Bella’s guardian angel, is a hard nut to describe, as it feels like it has a soulful and mystical time-traveling power, but then dives down into the pit of bad taste with fart jokes. I kid you not. 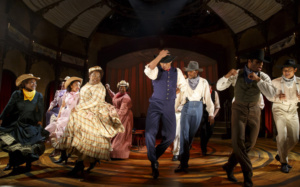 Bella, the woman who seems to be known and revered for her large booty, has to find her way in the world as she travels by train to meet up with her fiancé, Aloysius T. Honeycutt, portrayed by the strong voiced Britton Smith (Broadway’s Shuffle Along). Along the way she meets a man who is obviously the one she is destined to be with. He is the kind and loving train porter, Nathaniel Beckworth, played with charm and sweetness by Brandon Gill. These two experience all sorts of adventures, both big and small.  Some may call them tall tales, others would say they are products of Bella’s over active imagination, but they all arrive in the over-the-top variety: a suave sexually charged Mexican Cowboy, played by Yurel Echezarreta, looking for love on a train. A stripper-like Asian Cowboy (don’t ask me why), played with an up-for-anything energy by Paolo Montalban, does a strip tease for Bella. A stupid and slightly harmless group of bandits lead by a silly man by the name of Snaggletooth Hoskings (Massey), arrive to rob the train. And, most ridiculous of all, the inhabitants of a circus, that find Bella after her unbelievable escape from the bandits.  The circus is lead by a cartoon-like campy creep, CP Conyers, played as the gayest of all stereotypes by Echezarreta.  I’m not sure which one I found the most boring, or the most distasteful, but the most insulting award goes to the prancing girlie ring master, Conyers, of the hard-to-fathom circus. I’m not sure I understand the directorial choice of having so many characters in Bella be so campy and over-the-top, but it certainly didn’t help keep me engaged in this meandering concoction or care about the outcome. 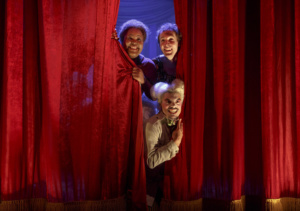 Kelley, as Bella, is the shining star in this circus of a show. She has one spectacular voice and a stage presence as big as that booty they keep singing about, ad nauseam. Every time she breaks out and sings to her hearts content, we can’t help but join with her.  It’s just a shame she is centered in the swirl of a musical that is having an identity crisis, saddled with some of the silliest scenarios I’ve seen.  The dancing is sometimes great, like when the cowboys kick up their heels (choreography by Camille A. Brown).  But other times it feels awkward, claustrophobic, and clumsy, as when the Asian Cowboy does his strip tease for Bella. The nods to Beyonce’s lemonade song and many of her dance moves are fun campy winks to the audience, but that many winks won’t charm us into falling for this musical. I was so pleased when the grandmother made her final entrance, tying up the way-too-many loose ends in quick succession, one after the other.  It didn’t quite make a lot of dramatic sense but I was thankful for her efficiency.  Bella’s grandmother wants to teach us that we need to make memories so big they won’t be forgotten. But even with all those glorious voices sailing out to us in this new Tall Tale musical, this is one long train ride on too many tracks in too many different directions. A silly story that will be forgotten in due time, but I look forward to seeing Kelley turn up somewhere else more memorable, befitting her magnificently sized presence.
Bella: An American Tall Tale. Ashley D. Kelley, Olli Haaskivi, Yurel Echezarreta —  Scenic Designer: Clint Ramos. Costume Designer: Dede M. Ayite. Lighting Designer: Japhy Weideman. Sound Designer: Lindsay Jones. Projection Designer: Jeff Sugg. Hair, Wig and Makeup Designers: Dave Bova and J. Jared Janas. Orchestrations: Daryl Waters. Vocal Arrangements: Kirsten Childs. Music Direction and Additional Arrangements: Rona Siddiqui. Music Coordinator: John Miller. Production Stage Manager: Erin Gioia Albrecht. Photo: Joan Marcus.
So for more, go to frontmezzjunkies.com
Related ItemsAshley D. KelleyBelle An American Tall TaleKirsten ChildsNewnew musicalPlaywrights HorizonsRoss
Off Broadway