He Says: Belting and Chasing Rainbows Center Stage at the Paper Mill Playhouse 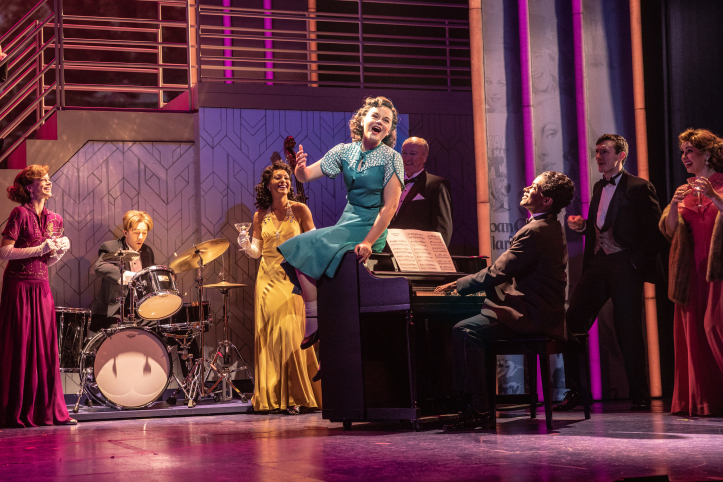 He Says: Belting and Chasing Rainbows Center Stage at the Paper Mill Playhouse

Once again, I found myself on NJTransit, traveling out to Milburn, NJ to see a new musical at the beautiful Paper Mill Playhouse. I had high hopes, almost as high as the producers most likely have in this pre-Broadway trial, as the show, ChasingRainbows: The Road to Oz, with a book by Marc Acito (Allegiance), is the heartfelt story of a young vaudeville trouper named Frances Gumm, played with big voiced presence by Ruby Rakos (Broadway’s Billy Elliot) who rises up the ranks of stardom to become the legendary Judy Garland. It’s the classic Hollywood story filled to the brim with marquee names, like Clark Gable (Sean Thompson), Shirley Temple (Violet Tinnirello), and Lana Turner (Clara Cox), but this turn of the time clock is really about the Family Gumm, as we join them as they navigate their way up a very rocky road paved with adversity, not gold, in the hopes that their young daughter with the big voice will save them all. What a burden to be placed on a young girl, but we know already how it turns out, and Frances bares the weight with glee and rises up to the stars, even as we watch the mechanics get set in place that will end up being her downfall.

Conceived by Tina Marie Casamento (with an additional lyrics credit), this bio musical is filled to overflowing with classic songs that are wound in and around the young MGM star’s rise to the moment when she is cast in the lead of ‘The Wizard of Oz‘. They include “Over the Rainbow“, “You Made Me Love You“, and “Everybody Sing“, courtesy of David Libby (off-Broadway’s Play it Cool) who adapted and inserted music within each moment of the story, along with music supervision and arrangements, sharing orchestration duty with the talented Larry Blank (Broadway’s Catch Me If You Can). The songs are timeless, iconic, and beautifully performed, even though they are not strictly sung by Rakos’ Garland. The overall effect, thanks to some solid work by music director Lawrence Yurman (Broadway’s War Paint), is engaging beyond the close bright spot on its central star. In many ways, this is the show’s blessing, but also it’s curse, as the story floats generously around the Gumm family, giving us just enough detail to want more, before always returning to Garland’s star trajectory. I’m sad to say that the central plot is maybe the least emotionally engaging part of this musical. Maybe it’s because we know the sad tale of how the studio, run by the pompous Louis B. Mayer, jovially portrayed here by Stephen DeRosa (Broadway’s Gary…) treated their young, pushing and shoving them around, giving them pills for every action throughout the day, but unfortunately, although all the details are there, we aren’t given much beyond that.

As solidly directed and brilliantly choreographed by Denis Jones (choreography for Broadway’s Tootsie, Holiday Inn), the tale winds its way through the typical, at least what is at its core. Frances’ struggling parents had a vision for their youngest, and in Chasing Rainbows they did all they could for their children. It feels a bit too kind on the lot, but I  guess this isn’t a remake of Gypsy. But Ethel Gumm, played by the powerhouse, albeit overly dramatic Lesli Margherita (Broadway’s Dames at Sea) could easily play that ‘Momma’ role, especially with that amazing voice filling the stage. She pushes her daughters forward with love, care, and a hard strong force, fueled by desperation and hunger.  Frances’ two older sisters, played beautifully by Tessa Grady (Off-Broadway’s Clueless) as Virgina and Samantha Joy Pearlman (PMP’s South Pacific) as Mary Jane, banjo-play and sing themselves beautifully, but are given little else to do on the sidelines of this story, but it is in daddy’s eyes and voice that we are being truly gifted by this musical. Max von Essen (Broadway’s Anastasia, An American in Paris) as the troubled father, Frank Gumm, almost steals the show from under those Ruby (Rakos) shoes, giving the most nuanced portrayal on that big wide stage. Even when he is coupled with the delightful and adorable Baby Frances, played by the big voiced Sophie Knapp (Broadway’s Once) performing with vaudevillian glee the fantastic “When You’re Smiling“. It is within his depiction of a closeted gay man and loving father that the soul of this show is projected with full focal range into our hearts, making us desperate to know more about this man and his tormented life.  His expressive performance is graced and enhanced by his velvety true voice, matched by his authentic humanistic touch.  Everyone else in that family of performers is generally directed to the front of the stage and instructed to belt that number out to the back row (they do it amazingly well), but he brilliantly finds the space to hold back and deliver something else, something softer and gentler. It is in those moments where we find the beauty under the Rainbow, when he makes us happily lean in to hear his kind lullaby grace the heavens (although I must admit that one sleepy-time song he sings to his young daughter is a bit creepy, given the lyrics).

The delightful Colin Hanlon (PMP’s Benny & Joon) as the piano playing accompanist Roger Edens and the incredible Karen Mason (Broadway’s Mamma Mia!) as the sensational secretary Kay Koverman fill out the space with their professionalism and joy, delivering the goods with finesse and clarity. They each give us moments of purity and pleasure in their interactions parceling out the details that we crave, but the bigger show-stopping fireworks are found most delightfully in the over-the-top tap dancing scenarios. This is where Chasing Rainbows shines almost as brightly as the top notch belting of songs. The dancing is astounding and athletically spell-binding, particularly when “All Ma’s Children” are lead most wonderful up onto the desk tops by the fantastically fun Michael Wartella (Broadway’s Tuck Everlasting) as a young Joe Yule, (or Mickey Rooney, as we now famously him) and Mason as the magnificent Ma Lawlor, school mum to the teenage stars in the making at MGM. The precision and expertise on display is a credit to the excellent cast and the dynamo choreographer.  I only wish he was more inventive as a director, giving us all the colors of the rainbow, not just the bright ones.

Fleshed out on a grand beautifully crafted stage, expertly created by scenic designer Alexander Dodge (Audible/Minetta Lane’s Harry Clarke), with excellent costuming by Linda Cho (Broadway’s The Lifespan of a Fact), dynamic lighting by Jophy Weideman (PMP’s The Sting), expert sound design by Matt Kraus (off-Broadway’s Forbidden Broadway), and beautiful filmatic projection design by Peter Nigrini (Broadway’s Ain’t Too Proud), Chasing Rainbows travels that rocky pathway to center stage, ending at the moment when fate and determination brings the wide eyed Garland to the road that will become yellow and brick. It’s filled with interesting pieces of a puzzle in regards to the decision made with the making of “The Wizard of Oz” that will excite the devoted (see below), had it not been for the prevalence of wiser minds and a stronger and more clear vision (if that’s where credit can be given). But those tidbits don’t necessarily draw us in emotionally, regardless of how fascinating they are. A real lion. Really?

All in all, this new musical is a pretty straight forward road to the Emerald City, with most of the big moments being pulled to the lip of the stage to blast out the number loud and strong, holding that last note with a power that forces our applause. The dancing sparkles wonderfully, and the voices sing powerful and true.  The details in the background enlighten and intrigue, and the story center stage is told with precision and professionalism. I just wish we were given something more to see in Garland, like Zellweger does in “Judy“, the film about her later days. We know the basics all too well to be fully pulled in. But if we want to find some under-the-surface depth and passionate heartbreak, we have to avert our gaze and look to Daddy Gumm, and the deliciously talented Max Von Essen to find it. That’s where the true emotional magic lies in this Chasing Rainbows. In his unknown tale of woe, a new musical could be found.

RossJanuary 2, 2023
Read More
Scroll for more
Tap
Meet When It Happens to You Tawni O’Dell As We Talk About Healing From Sexual Assault
Off Broadway Alliance Presents “Master of the House: The Relationship Between Theatre and Production”