He Says: Broadway’s American Son Drives into the Dark and Dangerous Streets of Racism, U.S.A. 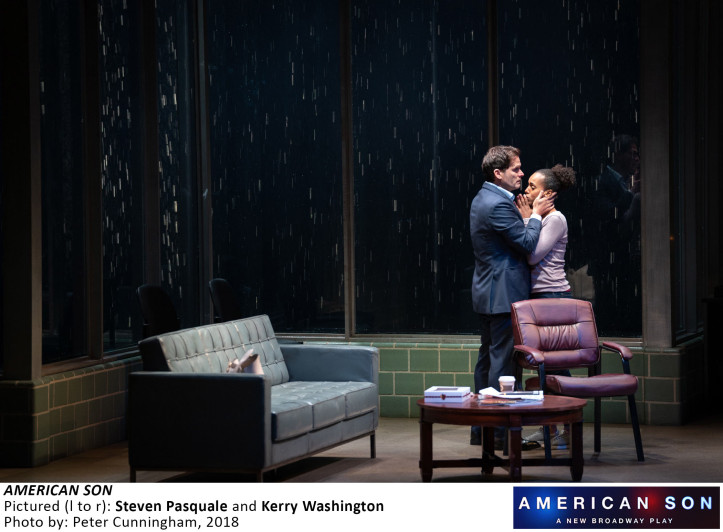 He Says: Broadway’s American Son Drives into the Dark and Dangerous Streets of Racism, U.S.A.

A luxury car has been pulled over in the middle of the night on an urban street corner by the police.  The car has three young black men sitting inside it; one is the driver, and the other two are the passengers. That is all we know, for the moment. No other information is available, we are told. And if you’ve been paying even the slightest bit of attention to the news the past few years (and really beyond, but you might have to dig a bit deeper to find the stories), this is a truly frightening and possibly deadly situation for those young man, whether they have done something wrong or not. In this carefully constructed thesis on what it means to be a person of color in the troubled and racist streets of America, especially these days, Christopher Demos-Brown sets out, in his new drama, American Son to deconstruct and examine the subtle and obvious.  And he does so with such dynamic purpose and intent that, deep inside this tightly crafted 100 minute play, we can barely find a moment to look away from this fast-moving automobile. The coats of paint on this vehicle, in different shades of color and hue, are carefully being applied, one after the other, showcasing with each a thoughtful and complex driven intent by this smart playwright. It falters in scope and speed at moments, here and there, struggling awkwardly to shift gears and directions with each new driver, but as directed with skill and precision by Kenny Leon (Broadway’s Children of a Lesser God), the vehicle never stalls or drops below the speed limit. This American Son knows how to keep driving forward.

Playwright Demos-Brown (Coral Gables) stations a black female, a mother, Kendra, played with fire and passion by Kerry Washington (Broadway’s Race, HBO’s ‘Confirmation‘) in a waiting room in the middle of a stormy night. The rain and thunder pummel the window behind her, and lighting throws warning bullets of light across the well-appointed set, courtesy of Derek McLane (Broadway’s The Parisian Woman), with strong lighting by Peter Kaczorowski (Broadway’s Venus in Fur). The space represents one of the nicer police precinct waiting rooms I think I’ve ever seen, so much so it took me awhile to place it in its context. It’s a little too comfortable to feel real, more like a hospital, but this is the Miami Police, and maybe things are nicer down there than in New York City, especially when it is being represented on a Broadway stage. Sitting there, Kendra is one flash away from distraught, leaving voicemails frantically for a few different men who are not calling her back. She alternates between being angry and apologetic, as the storm is brewing inside her heart. She’s desperate for an answer or a return call, but what she gets in return is an out-of-his-depth Officer by the name of Paul Larkin, played with a nervous sincerity by Jeremy Jordan (Broadway’s Newsies, “Supergirl“). Officer Paul is trying hard to pacify the ‘hysterical’ woman. It’s obvious that she is worried about her almost-a-man teenage son who drove away in his fancy car, hot-headed, and hasn’t been heard of since, but he’s not comfortable enough in his own skin, especially in regards to this well-spoken woman, to know how to operate this vehicle. So we waits for back-up, in a sense, help from another officer that he has called, with hopes that he will be able to keep this ‘situation’ under control.

Their collision is tense, riddled with racial and stereotypical-handling language, full of fiery and agitated talk of the nervous and terrified. They bounce off each other like the lightning in the background, hissing and sputtering out lines learned, filled with splatterings of victim-hood psycho babble, to the point where we feel both their frustration, and secretly wish Jordan’s Paul would just stop talking and excuse himself. He keeps digging himself in deeper, maybe because Kendra is far superior in intelligence, with a  quick sharp understanding of how someone in power can talk to a woman of color, especially a policeman. The prejudice of the situation keeps the high winds blowing, as Paul keeps trying to put off this woman and her pleas for information on her fragile yet strong young son. She is panicking, seeing frightening images of nooses and crosses on fire flickering through her desperate brain.  She states to the Officer, the policeman who just wants her to wait for the wiser and more experienced liaison Lieutenant to answer his page and show up to take her off his nervous hands, that she has raised their smart son well, working “so hard to get him to fit in” and keep him safe from this cruel heartless world. But she fears that the layers of racism that is alive and well in Miami might come crashing down on him, solely because he’s a tall black man driving around with two other black kids on the streets of Miami. Who these other two guys are, she doesn’t know, but she does have a lot more information seizing her guilty brain than she is letting on.

It’s all pretty straight forward, this American Son, playing out the dynamics as one would expect with this initial set-up, but a shift in the direction of the storm walks in, and it’s in the form of Steven Pasquale (Encores’ Assassins, RTC’s The Robber Bridegroom). Officer Paul Larkin thinks he is the Lieutenant that he has been waiting for, mainly because of the badge clipped to his waistband, and rattles, once again, too nervously on, giving away the details of the investigation with just a tad less editing than he had just done previously with the scared but demanding mother.  We know that this is Paul’s big mistake, we can feel it in the tense frame of Pasquale, who is, not surprisingly, the boy’s father, and the ex-wife of Kendra. The tides have shifted in the storm, as Pasquale’s Scott is also involved in the police force, a detective, and knows the lingo and his way through the halls of a police station.  He understands the way to talk to another officer, but for all his understanding, his dramatic shifts feel more confusing than authentic. He should know better, even though we feel his angst building moment to moment.  The tension and frustration are building within these two concerned parents, but they way they interact, although at moments feel entirely natural, other moments feel forced and scripted, releasing us from their emotional grip, here and there, keeping us at arm’s length rather than pulling us in deep.

It’s obviously a waiting game, from the get-go.  A divorced couple, one African American and one Irish American, soaked in the tensions of a failed marriage, hand-cuffed to old arguments, and coming apart at the racial seams. I don’t know if I ever truly believed that this dialogue would spill out at a time like this, but the ghosts of racism and prejudice are clearly hanging outside the big windows peering in and pointing hard at the badges and the night sticks, waiting for a revelation, with hopes of salvation. They raised their child to believe in a world full of goodness, they claim, but the level of the father’s misunderstanding, with arms crossed, stone-faced against his fellow policeman doesn’t always feel right, especially when Lieutenant John Stokes, played by the powerfully present Eugene Lee (Wilson’s How I Learned What I Learned) slowly enters cautiously into the whirl of the tornado. His addition, somewhat late in the reality game, brings some balance and messiness into the racial structure, throwing information that messes with everyone’s prejudices and assumptions. The storm ramps up, and the winds start to howl, not so much outside on that dark Miami night, but inside that waiting room between these four.  But it really turns into something dynamically thrilling when Kendra and the Lieutenant get their turn to go at one another without their backups.  It’s a fair fight, I will say, both well-spoken and filled with passion and intelligence. She deserves everything that gets handed to her, but it doesn’t make it easy on us to know where to hang our allegiance by the time the dust settles.  That last 15 minutes of that slightly too drawn out evening of a short one-act play is worth the wait though. It explodes down on all like a tree being struck by lighting, metaphorically crashing through those large windows and shattering lives all around.  It’s stunning, the ending, making it difficult to just shift from awestruck to applause, giving a standing ovation on shaky legs for all involved in this difficult and stormy night of waiting for this racially charged verdict.

Suzanna BowlingJanuary 22, 2023
Read More
Scroll for more
Tap
Free To The Public Conversations on Broadway With Jeremy Jordan
My View: And The Award For Best Birthday Celebration Goes To…………………..