He Says: Caroline’s Kitchen Burns Up at 59E59 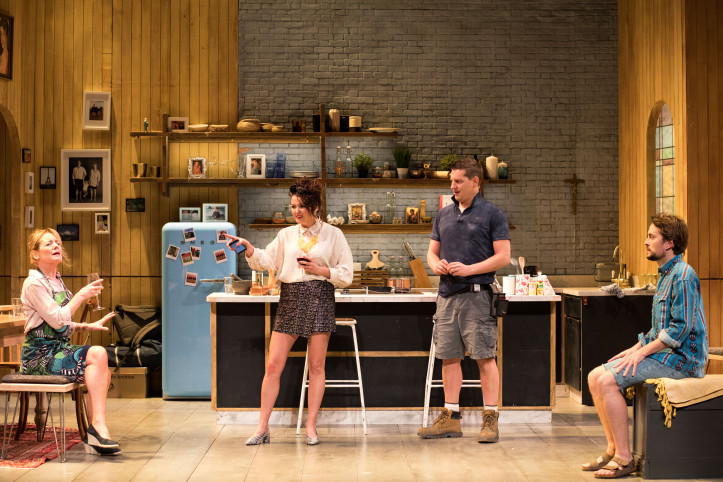 He Says: Caroline’s Kitchen Burns Up at 59E59

There are some wild food preparations going on at 59E59 Theaters as Original Theatre Company, Ghost Light Theatre, and Eilene Davidson brings the wacky and wicked Caroline’s Kitchen over and across the pond for our sampling. It’s a madcap adventure with Caroline, portrayed by Caroline Langrishe (Chichester’s Hay Fever), a well-known cooking show celebrity being challenged with an assortment of surprise ingredients and obstacles as she attempts to make a nice family celebratory dinner one evening. Playwright Torben Betts (The Unconquered) has thrown together a mish mash of characters, all playing the typical roles of a farce, but this one is without any doors, courtesy of the design work by James Perkins (Royal Exchange’s Sweet Charity) and lighting by Chris Withers (Greenwich’s Robin Hood). Unfortunately, even with some good ingredients here and there adding moments of flavor and giggles, this soufflé collapses in on itself, giving us not much to laugh about or bite into.

As directed with a broad grinned attempt for high hilarity by Alaster Whatley (Original’s Monogamy) the storm of the century seems to be baring down on this pretty little home kitchen somewhere in England, if we can take any cues from the thunder and lightning outside, courtesy of the fine work by Max Pappenheim (Royal Court/Broadway’s The Children). Beyond the dark clouds looming in the horizon, a social media storm appears to be more ominous in the form of a few less-than lovely paparazzi pics of the famed TV cooking show hostess getting home late one night after about three too many, images that don’t exactly support her goodie-two-shoes image she likes to portray on television. Caroline’s spontaneously sassy. passive aggressive, and somewhat disturbingly erratic assistant, Amanda, testily and dementedly portrayed by Jasmyn Banks (Royal Shakespeare’s The Wind in the Willows), almost happily menaces Caroline with the potential online photo scandal, all on the same night Caroline’s son Leo, portrayed earnestly by Tom England (Dundee Rep’s Deathtrap) is arriving home having completed college with a highly lauded degree and graduating position. The young man’s intention though is not to celebrate, but confront and to mourn. His love relationship with a fellow young male student, Rory has just ending breaking his heart and messing with his future plans that now must be altered but he also wants to confront his distant and (sun) damaged father, Mike, played by the red faced and very bombastic Aden Gillett (National’s Noises Off) in regards to his distant paternal love and parental affection, but more importantly, his homosexuality, a topic he thinks his mother has failed to talk to him about. But, as it turns out, there are many things that his mother Caroline has failed to mention to her hard-to-pin-down husband, almost as hard for the son to get his mother to focus on him for even a few minutes. It appears that is a familial problem, as some catastrophe or problem always seems to arrive, just like farcical clockwork, distracting the harried hostess and us from the truth and emotional core of the matter.

Naturally, Caroline has not mentioned their son’s sexuality so as not to upset him, a very old fashioned but relevant (I guess) scenario that seems hard to believe from the outbursts of the somewhat bratty exchanges that are lead by the son once her arrives home. Caroline has also failed to mention, more believably, the love affair she is having with the very very handy man, Graeme, played most authentically by James Sutton (RWCMD’s Widows). That is a secret she wants to take to the grave with her, and even as we don’t really believe her desire or her distraction, all the ingredients of this complicated stew are about to be laid out on the table, courtesy of the surprise guest, Sally, well played by Elizabeth Boag (Original’s Invincible) who everyone thinks is a prospective buyer of their house. Sally, thought, has an entirely different agenda, and one that seems outrageous, irrational, and definitely outside of the conventional box completely.  She’s there to the stir the pot to a boil, slowly and haphazardly, and then some. As this is English farce, be prepared for that to boil over into everything and onto everyone with abundance. I just wish it was done with a stronger order of character and intention.

In regards to authentic comedy, Caroline’s Kitchen burns up our interest and attention with each loudly screamed line and drunken tantrum. There isn’t one character that feels emotionally authentic or one you want to get behind, or even like really. England’s well meaning left-leaning vegan son, maybe the wronged wife, or even the carpenter – even though he’s a cheat, could be contenders, finding the way to be far more likable then they are directed to be here. It’s a damn shame, as the structure has all the makings of a good meal, but the preparations for dinner are messy and incomplete. But it did make me hungry for some comedy, and a good glass of champagne.

Cheers to that, Caroline, I guess.

Suzanna BowlingOctober 12, 2021
Read More
Scroll for more
Tap
$25 tickets To The Opening Night of Terrence McNally’s Frankie and Johnny in the Clair de Lune
Joan Ryan Proves She Has The Chops and More At Birdland