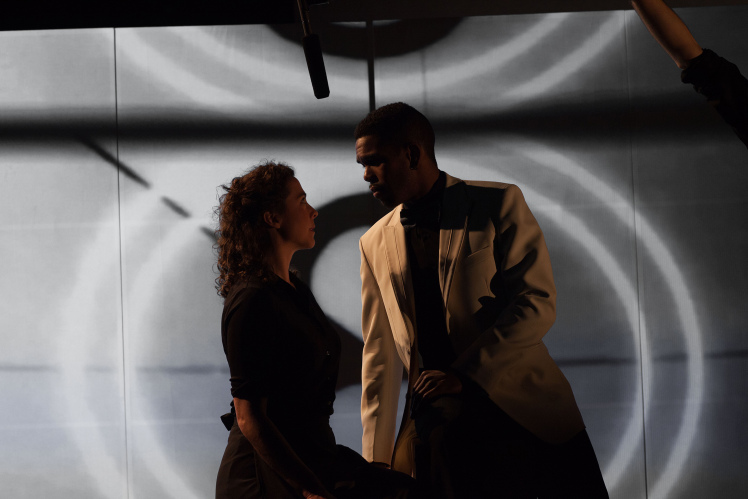 He Says: CasablancaBox: A Better ‘Why’ to Match the ‘Wow”

He Says: CasablancaBox: A Better ‘Why’ to Match the ‘Wow” 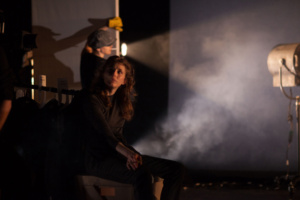 Walking into the upstairs theatre at HERE Arts Center is like walking on a Hollywood film studio soundstage. It feels like we are members of a live audience at the filming of an epic old-school movie from a bygone era. The set (impeccable designed by Reid Farrington, who also is the director and the video designer) with a bright white wall of light and the dark silhouettes of crew assembling scenery and lighting equipment (impeccable lighting design by Laura Mrosckowski) oozes with classic movie magic charm. As with all of those famous black and white films, CasablancaBox, as written by Sara Farrington, has the vision and the style to incite all those warm nostalgic feelings that flood our senses when we watch the 1942 romantic drama that this production plays homage to, the great Casablanca. 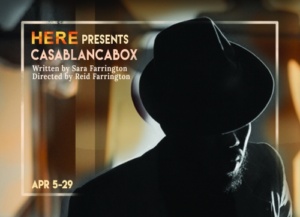 The craftsmanship that has gone into this multimedia production is pretty astounding all around. With large white flats, smaller film screens handheld throughout the stage and the production, and a few manually deployed microphone booms, CasablancaBox layers the actual Bogart/Bergman film, Casablanca strategically in front and all around the meticulous recreations of scenes from the film while also giving us a behind the scenes narrative. The troubles, insecurities, jealousies, and personal dramas floating through the filming of Casablanca ricochet through the large soundstage set as film director, Michael Curtiz (loudly and intensely portrayed by Kevin R. Free) tries valiantly to make a film against all the odds shown here. Standing next to him is the ever-present assistant, Irene, the stressed out girl messenger (a high energy fireball Stephanie Regina), who also plays double duty as the old-fashioned magnificently voiced film narrator. 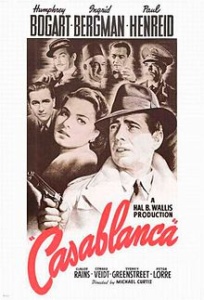 Zac Hoogendyk as the film actor, Claude Rains/Renault, Rob Hille as the complicated Peter Lorre/Ugarte, Matt McGloin as the arrogant actor whose contract stipulates he always gets the girl, Paul Henreid/Laszlo, and most notably the two headliners, Roger Casey as the worried Humphrey Bogart/Rick, and Catherine Gowl as the distracted and confused Ingrid Bergman/Ilse all do wonderful complicated work.  They flesh out the real insecure actors that are also movie stars, unsure about this project, their own casting, and their personal troubles that circulate around the edges of the filming. The extras, the men and women who create the atmosphere by being those that swirl around Rick’s bar, all have a place in the Farringtons’ CasablancaBox. They are not just ‘the lamps’ as they describe themselves in the film, but these ‘Refugees’ are given singular moments to shine in this theatrical production, namely Gabriel Diego Hernandez (the Austrian – Gregory Gaye), McGloin (the German – Lukas), Annemarie Hagenaars (the Polish – Adrianna), and Gabriella Rhodeen (the British – Carol).  It’s with the screenwriters (Lenore Coffee/Lynn R. Guerra, Howard Koch/Kyle Stockburger, Julius Epstein/Jon Swain, and Philip epstein/Adam Patterson, where we truly see the whirl wind of drama floating around the soundstage as they all attempt to make a film which doesn’t have a finished screenplay. The others scamper and prance around in front of that gorgeous white wall in what can only be described as a well choreographed nostalgic masterclass in showmanship.

The atmosphere never lets up, constantly giving us a multi-layered vantage point into the creation of art, and all the uncertainties that are interwoven within.  I only wish the creators put as much energy and time into the greater worldview of this piece as they did in the visual concept. The video work and the choreography (Laura K. Nicoll) is spot on perfect, and the execution, although shaky and messy at a few moments here and there, is also pretty exacting.  The large cast work hard being where they need to be, holding up the props and screens in the exact place they are needed, and always adding to the visual dynamic energy that exists in CasablancaBox. One can tell this project started as a big visual concept lovingly done, but what was needed was a better narrative as to why we should be interested in the behind the scenes story.  The bigger picture of what is the meaning of all this spectacular imagery isn’t clear but needed to take this from a place of beauty to a more fully satisfying event.  What we needed here on that beautiful sound stage is a better ‘Why?’ that matches the incredible ‘Wow’.