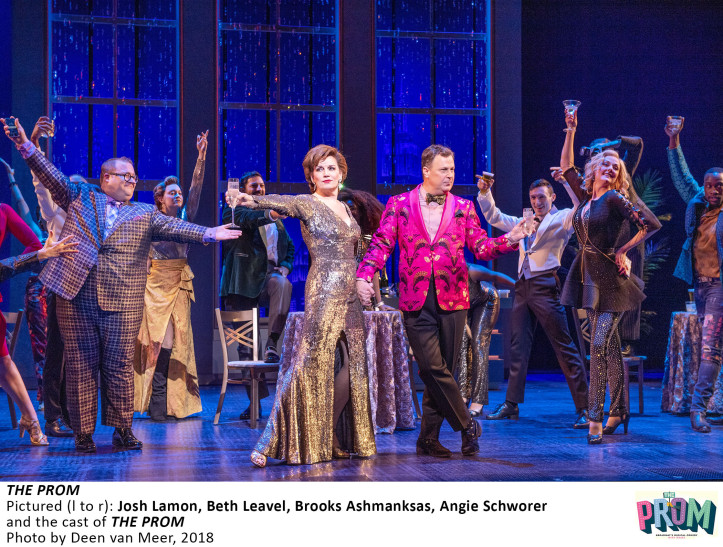 He Says: Celebrate The Prom on Broadway

He Says: Celebrate The Prom on Broadway

When I walked into the Longacre Theater to see Broadway‘s new musical, The Prom, I had pretty low expectations, wondering where this poorly named show was going to fall in the spectrum of shows too small (or too unformed) for the Broadway stage. Was it going to disappoint like Pretty Woman, or mildly entertain like Gettin’ the Band Back Together, or maybe, just maybe, it would be a pleasantly surprise, like MTC’s play, The Nap? Happily, joyously, The Prom jumps ahead of them all, proudly and easily surpassing its deceivingly stale title, reinventing the musical comedy wheel with stupendous charm, humor and a whole wagon full of heart and cleverness. I don’t think I’ve been so wonderfully surprised in a long long time, as Bob Martin (no surprise there, I should have known…- The Drowsy Chaperone, “Slings and Arrows”) and Chad Beguelin’s book, Matthew Sklar’s (Broadway’s Elf) music and Beguelin’s (Disney’s Aladdin) hilariously spot on lyrics overflows the punch bowl with smart and sassy songs one after the other, glorified by magnificent performances, and a heartfelt message of love, connection, and inclusion.

It all begins in a land far far away from small town Edgewater, Indiana, USA, in NYC at an opening and closing night party for a new Broadway show. It’s an unmitigated disaster, although you’d never know it by the lead’s delusion, about Franklin D, and Eleanor Roosevelt, starring the legendary and super inflated egomaniacs, Barry Glickman and Dee Dee Allen, played to perfection by the glorious award-winning Brooks Ashmanskas (Broadway’s Something Rotten!, The Producers) and Beth Leavel (Broadway’s Bandstand, Baby It’s You!). After having their reviews, worse than the ones for King Kong, read to them by their agent, Sheldon Saperstein, gloriously portrayed with an extra slice of ham by Josh Lamon (2ST’s Little Miss Sunshine), the delusional duo, along with the aging (beautifully) showgirl with the longest legs in showbiz, Angie, magnificently played by the stunning Angie Schworer (who naturally was Ulla in Broadway’s The Producers),and waiter, actor, and Juilliard graduate, Trent Oliver, played to perfection by Christopher Sieber (Broadway’s Matilda, Pippin) look for a mission to derail their bad PR stance. Since “nobody likes a narcissist“, and after bypassing the boring problem of the Electoral College, beautifully recited out of nowhere by Angie, they choose Emma’s plight, a mid-western Indiana lesbian high school student, sweetly played by the gentle but fierce Caitlin Kinnunen (Broadway’s Spring Awakening). She’s bravely standing up for her right, even when denied, to bring her girlfriend to The Prom, although her girlfriend, Alyssa, played wonderfully by Isabelle McCalla (Broadway/national tour as Jasmine in Aladdin) is too scared to come out of the closet and embrace the cause herself. These five Broadway types jump on this cause, thinking that this is the perfect remedy for their falling and failed reputations.

What follows next is heaven, especially when each get their moment to shine; thanks to music supervisor/vocal arranger Mary-Mitchell Campbell (Broadway’s Tuck Everlasting), orchestrations by Larry Hochman (Broadway’s Hello, Dolly!), additional orchestrations by John Clancy (Broadway’s Fun Home), music arrangements by Glen Kelly (Broadway’s The Book of Mormon), music coordination by Howard Joines (Broadway’s Groundhog Day), and music director Meg Zervoulis (Broadway’s Great Comet). As directed and choreographed with glory by superstar Casey Nicholaw (West End’s Dreamgirls, Broadway’s Mean Girls), each of the cast gets their spotlight number to garner our applause wholeheartedly. “Changing Lives” is what they are here for, sorta, after their damaged egos get a bit of external validation.  The caravan of Broadway types bus them selves in on the backs of a low budget Hair tour, and try their mightiest to save “one lesbian at a time“, much to the initial delight of the progressive musical-lovin’ principal, Mr. Hawkins, played magnificently by the wonderfully grounded Michael Potts (Broadway’s The Iceman Cometh), an avid Dee Dee fan. He gets his dream and his disappointment all rolled up in one singular sensational lady. “We Look to You” is his number, and we all do look to Leavel’s Dee Dee, especially as she blows the friggin’ roof off the theatre with her number, “It’s Not About Me” and then sells us her story, “The Lady’s Improving“. Sieber shines in his perfectly timely and smartly written song, “Love Thy Neighbor” raising the roof of that convenience story church. Not to worry though, both Ashmanskas gets his with the fantastic “Unruly Heart” and Schworer’s Angie, along with the nervously wonderful Emma, kicks it up one more notch after the other with the fabulous “Zazz“, selling it as only that “sweet MILF ass” can. It’s a not-to-be-missed ode to Broadway’s Chicago and to showbiz itself, and this Fosse girl certainly knows how to give it to us in spades.

The lesbian sweethearts are not outshined though by the Broadway scene stealers. Singing engagingly hidden out of view, they steal our hearts with “Dance with You“, as the couple does alongside the rest of the talented crew that play the young high school lovers in “You Happened“. The cause and the creation is perfection, and with a delightful set design by Scott Pask (Broadway’s The Band’s Visit), festive and glittery costuming by Ann Roth (Broadway’s Blackbird), strong lighting by Natasha Katz (Broadway’s Frozen), and a tuned-in sound design by Brian Ronan (Broadway’s Margaritaville), no moment is missed or messed up. I’m thrilled to report that The Prom is a full throttle joy to behold, making me want to insist that all get a date and go to this particular festive and fun Prom, especially if you didn’t get a chance to go to your own high school one because of feeling like a loser, an outcast, or an oddity. Just dress yourself up in your prom-best, pin on that corsage, push aside that evil bigoted mother of Alyssa’s, played gloriously by Courtenay Collins (off-Broadway’s Eating Raoul) and dance with joy as all are welcome to The Prom. “Is this what not failing feels like?“. Yes. It. Is. And you won’t regret going for one minute, but really, was their not a better name to be found for this magnificently funny glorious stupendous musical that begins to parallel this amazement? It deserves something much much better.
Related ItemsANGIE SCHWARERBeth LeavelBob MartinBroadwayBROOKS ASHMANKSASCasey NicholawMusicalNewRossThe Prom
Broadway