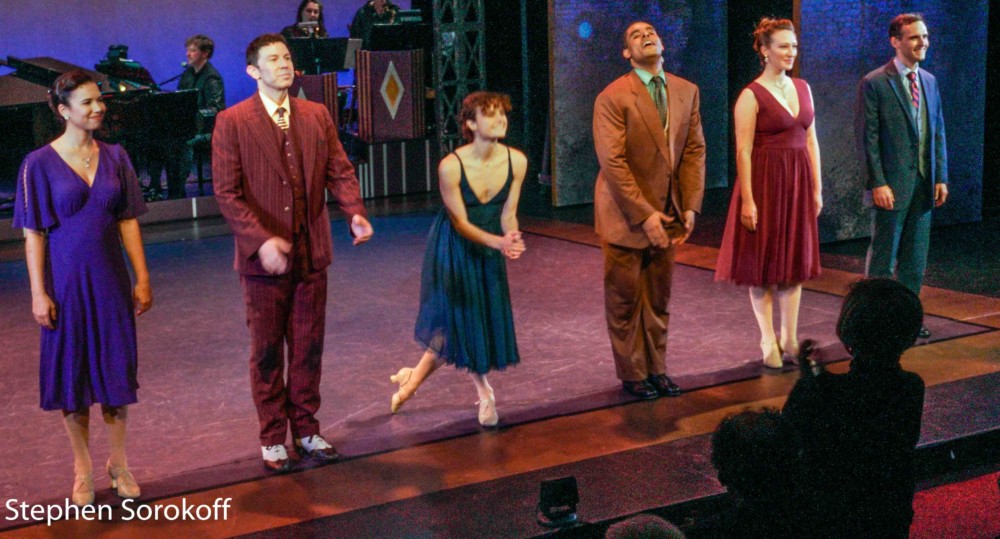 Cheek to Cheek: Irving Berlin In Hollywood by the York Theatre Company is a revue of Irving Berlin’s music. In York’s temporary digs, the Theater at St. Jean, the musical flashes back, and forward on Berlin’s life as a lyricist, music writer and even touches on points about his life. Born on the Lower East Side of Manhattan, Berlin never had any musical training, his auto dictum is quite remarkable considering all that he did in his lifetime. As a nine time Academy Award nominee, it was “White Christmas” that landed him his first and only Academy Award.  Unlike most writers, Berlin not only wrote for Hollywood but for Broadway as well and often went to where work was most plentiful; a good thing as well because Hollywood would cool at times towards movie musicals. Through his savvy negotiations Berlin was able to get top billing for any movie in which he wrote the music for; whether RKO or FOX Studios, Berlin commanded more than all writers during his time in Hollywood.

Cheek to Cheek is an entertaining musical, albeit for an older audience who grew up with his work and it was evident Sunday when I reviewed this show; the audience was old, very old. But you did not have to be old to enjoy it, The singing for the most part was very good; only to be usurped by the phenomenal dancing. The show mid way unfortunately became to familiar … songs and the dancing became all to similar.

Berlin, unlike Sondheim songs sound to alike for the most part and never really branch out.  Sure we had “The Piccolino” and “The Yam” and they were the new thing at the time. And yes, Berlin did front the idea of “Ragtime”, that dance was the major reason why people listen to music because it had such an affect on the public. This was precisely why the word dance was a major part of his titles in his songs.

Over The Course of his writing years, Berlin wrote for people like Al Jolson, Fred Astaire, Ginger Rogers, Bing Crosby and Danny Kaye. There was no question that Berlin in his prime was the most sought after songwriter on both coasts.

Jim Morgan captures the element with his set design; the stage wings of theater, showed moving pictures of Berlin, rain fall and the various actors who performed in his movies. The deft lighting of Jason Kantrowitz often gives off the various feelings of Cabaret, a Jazz Club and the splendor of that by-gone Hollywood era. The band backing up this show also give this variation a vibe; whereas the trio of drums, bass and piano standout better, the five keep up with the hard dancing that the cast performs throughout the 80 intermission less minutes.

Opening nicely with “Blue Skies”, a jazzy number that gets the audience in the mood for Mr. Berlin and his music.; “Let Yourself Go’ is an excellent follow up to the opener; here Melanie Moore, Joseph Medeiros, Jeremy Benton, Kaitlyn Davidson and Phillip Attmore put on a performance like the old time great of yester year that graced the silver screen. For the first eleven songs “Cheek to Cheek” rolls along; the show begins to have too much familiarity after “The Yam”. It may have been better if music director David Hancock Turner chose the songs differently, certainly perhaps in a different order. Rob Berman too would have better served this musical with some different dance numbers as they too became mundane to watch.

The six actors made the best of it in that they really all danced well, the costumes of different eras helped and supported this musical. Nicole Wee for the most part had the costumes on the mark.

In “Cheek to Cheek” we get a smattering of the life of Berlin, his music and the legend of both Hollywood and Broadway; the cast, the musicians for the most part all give this show a warm and fuzzy feeling. Director Randy Skinner was careful and concise in how he invisioned this show. Skinner made good on a book by Barry Klienbort that was not consistently strong. If the show went more into Berlin’s life, or if it had a more versatile song selection, “Cheek to Cheek” could have been great rather than just enjoyable.