He Says: Cherry Lane Theatre Gives Us Some Solid Original Sound to See and Hear 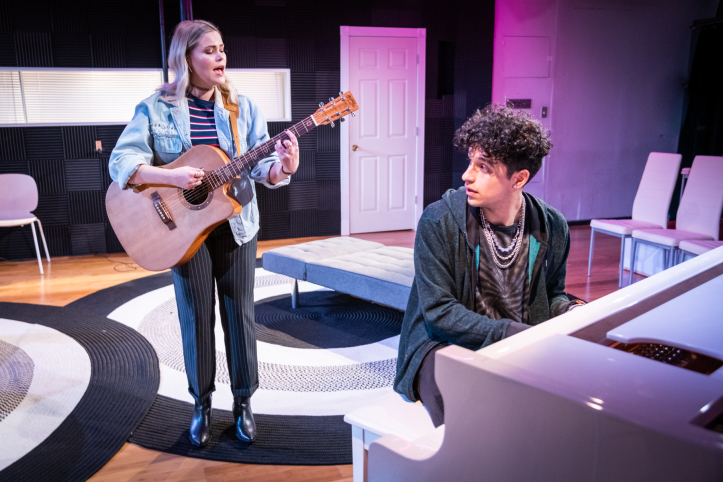 He Says: Cherry Lane Theatre Gives Us Some Solid Original Sound to See and Hear

Formulating in front of our very eyes, or so it seems, Original Sound, the new musical creationist play by the man with a great ear for language, slang, and song, Adam Seidel (Catch the Butcher) strums forward with a strong idea and a fine arrangement. The drama finds a harmonious rapport within the pairing of the young and enthusiastic musician and songwriter Danny Solis, strongly and authentically played by Sebastian Chacon (PR’s The Rape of the Sabine Women…), the beating heart of the tune, and the struggling-to-remain-relevant pop star Ryan Reed, intuitively portrayed by Jane Bruce (A.R.T.’s Jagged Little Pill). Beginning with the two as far apart in vision and drive as one can imagine, Danny is floundering, deep in a pool of self destructive young adulthood idealism, fighting with his sister, Felicia, strongly portrayed by Cynthia Bastidas (Sheen Theatre’s The Mecca Tales) and battling the musical demons of his deadbeat father Tommy, dynamically portrayed with an uncomfortable realism by Wilson Jermaine Heredia (Broadway’s original Angel in Rent). Danny wants to create his own brand of beat, mixing and posting his 420 Collective tracks online for all to hear. The kid has talent, making a dis-track of one of Ryan’s hits and some alternative Original Sounds, but the playlist only draws Ryan in, downward into his sound where she gets rhythmically ensnared by his creations.

Ryan Reed is trapped in pause, finding it difficult to hit the play button on just about anything. It’s a classic musical biz tale of the powers that be who want a hit, while she wants an Original Sound. Lucky for us and for her, she finds what she doesn’t even know she needs within the unlikely and forced pairing with Danny. She’s a pain in the butt, basically, scared that she has forgotten the beauty of composing or lost the ability to create some “dope shit“. Her character has a difficult story and song to sell, and at the beginning of this well balanced and surprising tale, Bruce doesn’t make it easy for us not to totally hate her, but once the dark shades slide down her nose revealing those hungry eyes, we start to see the melodic fires flare forward with musical passion and authenticity. It’s a beautiful and telling moment, when the work sends shivers down our collective spine, and the talk, which was once down, rises up into respectful camaraderie where an Original Sound can finely be made.

As directed with fluidity and rhythm by Elena Araoz (NYTW’s Fur) and powered by the musical direction of Daniel Ocanto (Hillary Bettis’ Alligator), Original Soundaccomplishes just that, giving a connection and intrinsic grace to the creation of music in the difficult and somewhat diabolical business world of popular music and the professionalism of labels. Played out on a simplistic set that works for the most part by Justin Townsend (Kidnap Road), all of the artists involved attempt to find their pathway through the combative and intriguing dynamic with a somewhat clumsy lead in by the pair’s individual counterparts; Ryan’s agent and manager Jake, played by Anthony Arkin (MTC’s Power Play); and Danny’s friend and pseudo-manager Kari Bateman, delicately played by the non-binary transmasc actor Lio Mehiel (ABC’s “Deception“). These two, like the other secondary characters feel functional but flawed in their interconnectability. Danny’s father finds a surprising way to twist the recorded sound around, but he’s also slightly perfunctory. Each apply an edge that escalates and messes with the other, but they do find a way to fuel the language and Original Sound, pushing it all forward.  The combativeness and conflicts sometimes feel like one too many instrumental layers on a track, messing with the simplicity of the engagements, but when the former music journalist Seidel aims at the creation of a momentous sound, the play works intrinsically, building a compelling and thoughtful song and story forward for us all to engage with. Now just release that one song so I can download it and embrace the wonder.