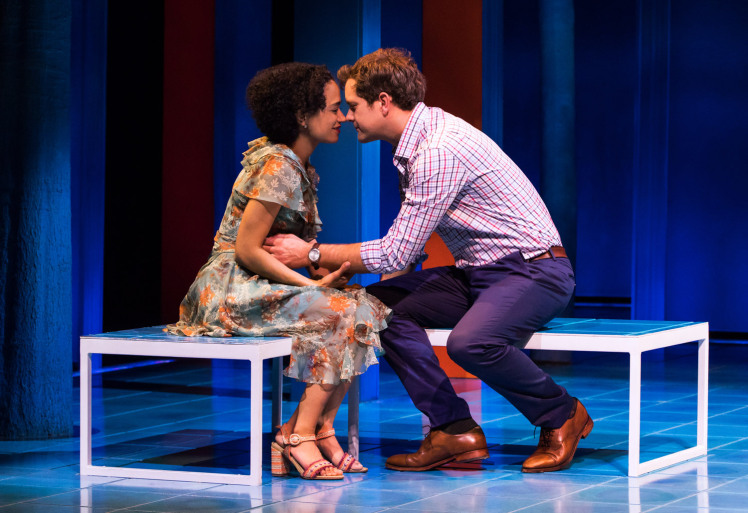 He Says: Children of a Lesser God A Bit Creepy in the Current and Modern #MeToo Moment

He Says: Children of a Lesser God A Bit Creepy in the Current and Modern #MeToo Moment

Mark Medoff’s Children of a Lesser God is one of those plays that I should have read or seen by now, but I actually don’t know anything about it beyond the basics. When it made its Broadway debut in 1980, it won three Tony Awards, including Best Play, Best Actor for John Rubinstein, and Best Actress for Phyllis Frelich, a deaf actress that the part was specially written for. But it’s the 1986 film, directed by Randa Haines (“Antwone Fisher“), and starring Marlee Matlin and William Hurt, that really brought this story into modern culture prominence. It received five Academy Award nominations, including Matlin’s, who became the youngest actress, 21 years old at the time, to win the award for Best Performance by an Actress in a Leading Role, and becoming the only deaf Academy Award recipient in any category. I never did see the film, nor do I think I ever read anything about it, except for the main romantic structure and storyline. It had always intrigued me, but for whatever reason I never did get around to seeing it on stage or screen.

Medoff (Obie Award winning: When You Come Back, Red Ryder?) meet Frelich, the deaf actress, the eventually star in the play, at the University of Rhode Island’s New Repertory Project in 1977. Structuring the play partially on Frelich’s own romantic relationship with her hearing husband, Children of a Lesser God, a phrase that comes from Tennyson: “For why is all around us here / As if some lesser god had made the world“, sets out to chronicle the tumultuous relationship and marriage between an unconventional speech pathologist for the deaf and a reluctant-to-speak deaf woman who was also his former student. So when it was announced that this play, after a summer run at the Berkshire Theater Group’s Fitzpatrick Main Stage, was going to be staged at the Roundabout’s Studio 54 theatre, I was genuinely interested and excited to venture into that world and see what all the fuss was about.

Adding to that curiosity, the back story of the leading lady in this particular production is quite the tale in itself. Lauren Ridloff, the deaf actress who can also be seen in Todd Haynes 2017 film “Wonderstruck“, is making her Broadway debut after landing the part in the Berkshires. She was initially hired to assist in the reading of the play, but after her deeply emotional delivery during that table reading, the production quickly regrouped and restructured, decided to cast her in the part of Sarah Norman, the deaf young woman at the center of this romantic tale. The New York Times after seeing her in the summer stage production referred to her as a “sensational find” so it didn’t take long for the powers that be to persuade her to reprise the role on Broadway alongside her handsome, famous, and very talented leading man, Joshua Jackson (2ST’s Smart People, West End’s A Life in the Theatre). And the rest, as we say, is history in the making.

As directed with a surprisingly vague randomness by Kenny Leon (A Raisin in the Sun, August Wilson’s Fences), Ridloff finds a way to sparkle in the part of a rebellious student and resident maid at a school for the deaf and hard of hearing in New England. She beautifully embodies the role with every inch of her body, making us feel her troubled story as it reverberates out like sound waves with every gesture, even though this staging doesn’t particularly help. But it is within her use of sign language as her communicative tool that she finds safety and structure. James Leeds, played solidly by Jackson, the new teacher on the block, wants her to stop hiding away behind the school walls, and learn how to speak aloud and read lips, but she resists, seeing this as an insult. She steadfastly refuses his attempts, somewhat out of fear of being ridiculed, but also believing fully that she shouldn’t be forced to assimilate in that manner. She sides with the other rebellious resident, Orin Dennis, played with passion and intensity by John McGinty (NY’s Fête de la Nuit), who is trying his hardest to create change from within, and through a lawyer, Edna Klein, played with a fine balance of awkward and privilege by Julie Cerda (Netflix’s “House of Cards”) hired to represent them. Treshelle Edmond (Deaf West’s Spring Awakening) sweetly portrays a young and feisty deaf student who sees big hearts floating over the tall and handsome James Leeds, and Anthony Edwards (TV’s ‘ER‘) is almost unrecognizable as the straight-laced and backward facing Mr. Franklin who runs the school where this tale mostly takes place. The formidable Kecia Lewis (Broadway’s The Drowsy Chaperone) is also present, playing Sarah’s emotionally overwhelmed and disconnected mother, with almost too much presence and sass to believe in her disregard, but the outlook she presents is as real and understandable as any, and maybe more so.

The set-up is compelling and the way the story is being laid out at the beginning seems reasonable and thought-provoking. The set, by designer Derek McLane (The Parisian Woman), with fine but uninspiring period costumes by Dede Ayite (PH’s Mankind),  is surprisingly cold and modern, as is the lighting by Mike Baldassari (Broadway’s First Date), in sharp contrast to  the intimate moments trying to be constructed. The structures work against the emotionality of these performers, making it almost impossible to see the romance that we need to believe in blossom. Leeds behavior as he tries to woo his former student starts to feel a bit stalker-like and creepy, climbing up a tree and peering into her bedroom, persuading her to open the window to let him in. He then proceeds to seduce her at the same time as he tells her they don’t have to do anything that night. Back in the 80’s, maybe this development was seen as natural and even romantic, but in these days of the #MeToo movement with these type of power dynamics being scrutinized and investigated, his behavior being characterized as romantic is just not acceptable anymore. Their whole relationship, even when taken in the period context, seems awash in unbalanced power and control and her character is limited and devalued to a woman who marvels at the idea of a blender in her lovely new kitchen.

As the Broadway houses that hold the musicals, My Fair Lady and Carousel struggle with their own problematic story lines, trying their hardest to find modern sensibilities to unravel the unhealthy power dynamics within their plots, Children of a Lesser God seems to be sitting quietly on the sidelines of this dialogue, pretending these complications don’t exist in the play. The play seems old-fashioned and happy to be just that, with the first act seemingly ending on a romantic note, with very little of a conflict being fully constructed. They are in love and want to marry. That’s great, and Orin doesn’t really agree with it. A problem that doesn’t seem to carry much weight. When did they fall in love? That is a solid question in this telling, as I never really saw it arriving or growing. Medoff’s famous play may need a strong rewrite or adaptation if he wants it to continue to be a well-regarded study of conflicting ideologies on speech and deafness, but as it stands right now in this well acted, but poorly constructed production, it stalls and starts to feel creepy. Ridloff’s performance does a great deal to soften the sharp edges, but it still cuts deeply into the problematic dynamic. Congrats to her, but I left feeling ill at ease about what I just witnessed.