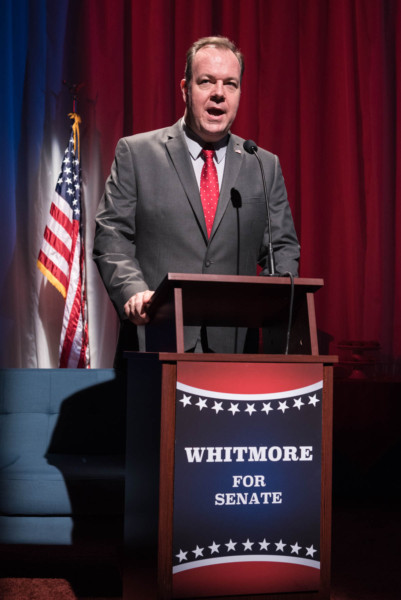 He Says: Church & State Seriously, Give it a Shot!

He Says: Church & State Seriously, Give it a Shot! 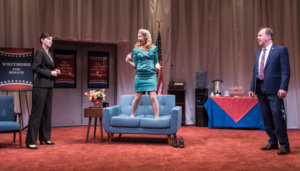 I was not expecting such a surprising and jolting time at the theatre when I arrived at stage 5 of the New World Stages. I walked in not entirely sure what I was going to get, but was told by Times Square Chronicles that I would like it.  I was expecting more of a comedy, maybe a silly parody of the ridiculousness of politicians and their use of the church for their own greed. Or something more like the poster quote, “seriously funny”. I was not prepared for this crisp well written examination of god, guns, and government. It is true that it has moments of hilarity, but the bones of this play have something far more serious to say. Church & State, as written by Jason Odell Williams, gives us a politician’s dilemma when his personal beliefs are put to a test, a stance that no longer parallels his political platform.  The playwright dissects the arguments along party lines, theoretical reasons, and political excuses that flow too easily out of many a politicians’ mouth, but here they aren’t just platitudes but heartfelt emotional contemplations on what faith really means. It is done with a great deal of smart humor, but ultimately, the debate is deathly important.

Finely directed by Markus Potter with a great atunement for the humor underneath the seriousness, the husband and wife political team are expertly played by Rob Nagle as Senator Charles Whitmore and Nadia Bowers as his very southern sassy wife, Sara. They debate and fight their way through the belief systems that have helped form their marriage and create the foundations of their political successes. Lovingly connected, these two really pay attention to the other even when they can’t believe what is coming out of their partner’s mouth.  They listen to each other’s different opinions in a way that really draws us into the Senator’s dilemma because it is as authentic as it can get. As his campaign manager, Christa Scott Reed plays Alex Klein with a crispness that sits well on this New Yorker. Focused and direct, she plays the smart political operator with a conviction and tension of a woman who deeply wants her candidate to win, and not mess up for their sake, and for hers. She seems to have faith in the Senator’s inner goodness while also holding her deep desire to be part of the team that wins. These debates of what should be done flow quick and fast with a realness that is completely relatable. 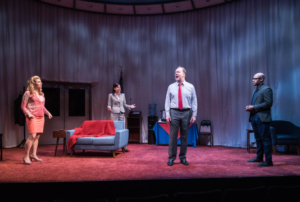 But once the Senator leaves the room to give a speech, these two powerhouse women shift uncomfortably together. It’s the one time Church & State shows some strain in its authenticity. The dialogue between them doesn’t ring as true as the solid and thoughtful writing all three have shared. Maybe playwright Williams didn’t quite know what to do with these two women once the perplexed politician isn’t near. The women are so well crafted throughout the charged arguments that revolve between them and the Senator, that the stilted conversations between these two stall the powerful energy that was driving the play forward.  The scenes of these two very different women bonding over their similarities is crucial to the narrative, but sadly not as authentic.

The last few scenes, without giving anything away, are shockingly powerful and carry a strong sense of purpose.  Possibly a bit on the convoluted side as it comes to an end, the message is clear and desperately needed. Church & State is a bang-on jolt that is needed in this world.  It may be preaching to the choir in this off-broadway theatre here in the blue state of New York, but every argument and set-up rings true. So maybe the quote should say, “Hilariously Serious” that deserves a shot.

Suzanna BowlingJune 23, 2022
Read More
Scroll for more
Tap
Medieval Times – A Night of Knights
He Says: CasablancaBox: A Better ‘Why’ to Match the ‘Wow”